"This Fascist element in our community"

I can't find this story anywhere on the Web, but BBC radio news is reporting that Dr. Ghayasuddin Siddiqui of the Muslim Parliament of Britain used those words to condemn Friday's murderous marchers.

The BBC seem to be spinning calls for the arrest and prosecution of the marchers as a Tory initiative, but it's good to see Shahid Malik and David Winnick on the side of the angels, not to mention the Muslim Public Affairs Committee saying that Friday's demo should have been stopped.

Police later said two men had been arrested near the embassy during the protest.

"They were arrested to prevent a breach of the peace, after a search by officers found leaflets including cartoons of the Prophet Mohammed," a Met spokeswoman said.

Calling for people to be beheaded is one thing. But a cartoon of Mohammed ? - that's going a bit too far. You have to see these things in their cultural context. There's a report here. The guy dressed as a suicide bomber was ignored. 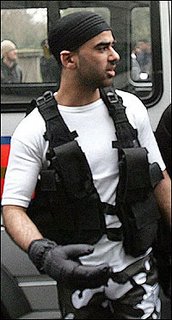 Peaceable, non-provocative protester - not to be arrested. 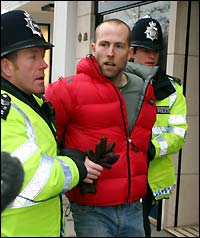 Ths man may have cartoons ready to detonate at any time. If he's about to hand them out, 7 or 8 head shots are appropriate.

PS - for how long has it been mandatory in the Met and on the BBC to call Mohammed 'the Prophet (note capital P) Mohammed' ? I haven't noticed Jesus being referred to as 'the Lord Jesus Christ' lately.
Posted by Laban at 7:18 pm

They have to call him 'the Prophet Mohammed' to distingish from all the other people called Mohammed, ie every other Muslim.

Anonymous said...
This comment has been removed by a blog administrator.
8:47 pm

I've noticed "The Prophet" in a few American newspapers, too. Disgusting.

New petition to counter all the pro Islam/anti-Danish ones.

Please sign the on-line petition against the British Muslim terrorists who were on the streets of London yesterday.

The BBC has been using the capitalised designation 'the Prophet' for the old pede-individual depicted in certain controversial Scandinavian cartoons since February 1.

I started posting about it as soon as I saw it, and gave up trying to keep track after two days. It seems to appear on every single page relating to this business.

RTE and Sky have both also since got in on the act.

Mass immigration's good for us, didn't you know.

I've got no gripe with Muslims - those who aren't trying to kill me. I'm a big Sayyed Qutb fan.

And I prefer a pious Muslim to a godless Brit - present company excepted, of course.

But the dhimmi, dimwit drongos at the BBC and Guardian REALLY get on my wick.

Well I'm actually glad they are doing this. It may sound perverse, but at least they are showing their true colours in a way the public simply can not ignore. And so are the police....

Ive got no gripe about the odd one or two muslims living here. But I, like many others, must have been out at the shops or something when they held the referendum about whether we would happily have 1.6 million living here. In fact even more strangely I can find no record of any such referendum taking place for that issue or the other one I seemed to have missed regarding mass 3rd world immigration. Washing my hair that day perhaps?

Perhaps some of Laban's readers with better memories than I could be of some assitance.

How did they know it wasn't a real suicide bomb-belt?

Don't mentiond the Prophet Mo Ham Head. I got banned from the fascist Biased BBC blog for that. :(

You'll get banned from here too.

We're all part of the Zionist Conspiracy you know ;-0

Nevermind Damien and the three sixes etched on his head! I reckon the 'Prophet Mohammed' was the 'Anti-Christ' especially when you look at how many verses the Koran has!