All Your Children Belong To Us

Local "Democracy" Week in action. Background - the proposed travellers site at the delightful Norfolk village of Spooner Row is vehemently opposed by villagers. The village schoolchildren are attending a workshop run by Norwich and Norfolk Race Equality Council, as part of Local Democracy Week.

Mr Wakeman said: "The two people taking the workshop asked the children if they wanted to stand up and make a pledge.

"None of the children stood up because I suspect they felt awkward, but the pledge was read out anyway.

"They were asked to make a series of promises to be kind to gipsy and traveller children, welcome them into the community and not bully them.

"The children were encouraged to put their fingers in the air or their hands on their hearts to signify their acceptance.

"I am very unhappy about any child of primary school age being asked to take any form of pledge to any group in society.

"But it was also of concern because of the heightened level of anxiety felt by many of the pupils' parents about the proposed travellers' site."

Mr Wakeman has now made an official complaint to the council.

The local council, btw, is Tory-controlled. Now I'm in favour of children - and people being nice to each other full stop - even if their parents work for Norwich and Norfolk Race Equality Council. But State (and NNREC will be totally tax-funded) indoctrination ? As the people of Cottenham found out, discrimination and hatred cuts both ways.

Council officers have insisted they knew nothing about the pledge and denied trying to "brainwash children" into accepting the controversial plan.

But one parent, who asked not to be named, said: "It appeared as it the council was targeting children with propaganda to try and get them on side.

"My first thought was that it was disgusting to target children in such an underhand way when so many people oppose the new site."

Spooner Row Primary School head teacher Simon Wakeman said he believed it was "inappropriate" for children to be asked to make the promise.


It's all so clear, I could never forget,
Sarah, Sarah,
Lovin' you is the one thing I'll never regret. 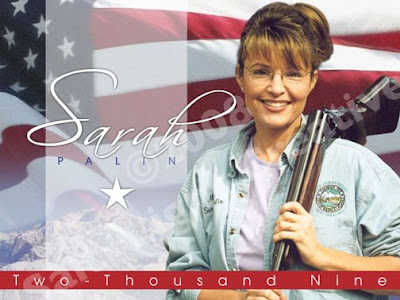 No matter what the election result, you can have Ms Palin on your wall until 2010.

The 13-month calendar–the first of its kind–includes dozens of original portraits and candid shots of the Alaska governor on the job and with her family.

Hmm. I'm not sure how that sits with family values, but it should do wonders for sales.
Posted by Laban at 11:19 pm 5 comments:
Labels: isolated incidents

But let Ross (on the great David Davies MP) and the Dumb One (on get-tough, victim-friendly Jack Straw) speak for me.
Posted by Laban at 1:19 pm 1 comment:
Labels: tough on crime, white liberals, your tax money at work

Brings A Tear To The Eye

The highly readable Dawn Patrol, weblog of the wonderfully named Dawn Eden - a convert to both Christianity (from Judaism) and chastity (she was a music journalist) - author of (kid you not) The Thrill of the Chaste.
Posted by Laban at 11:39 am No comments:

Back in a day or two ...
Posted by Laban at 9:21 am No comments:
Labels: wales
Newer Posts Older Posts Home
Subscribe to: Posts (Atom)