Anyone Know What This Fairy-Tale's Called ?

When my darling and I were reading a lot of fairy-tales at bedtime, we read one which we've not been able to find again since in the works of Andersen or the Brothers Grimm.

A young man is out in a boat on the river, and overturns. Drowning in the weeds at the bottom of the river, he's saved by the river fairy/sprite, they fall in love and he can now live underwater.

But he hankers after his old friends and acquaintances 'up above'. Oh, to see them again and to find out what's happening in the wide world!

So she lets him go, as the Hebridean witch-queen Thorgunna released Lief Ericsson, on condition of his return.

And like Lief, our young man forgets his betrothed and his promise - and eventually is due to marry someone else.

Come the wedding day, and it's starting to rain. By the time bride, groom and guests are in the church, it's raining stair-rods (I paraphrase) and the river is rising fast. Before they get to 'I do', the river is sweeping all before it - church, bride, groom, guests and all. That's what comes of slighting the river-fairy.

I told you my daughter liked the doomy, gloomy stuff.

Anyone know what the story's called ?
Posted by Laban at 8:36 pm 8 comments:
Labels: books

When I posted The Shins last year, commenter Yaffle asked if I'd heard the Fleet Foxes. Asked my 18 year old and he knew nowt of them. Not so now - it's rarely off the stereo and the car CD.

The whole album sounds as if they'd been listening to Perotin.
Posted by Laban at 7:50 pm 2 comments:
Labels: music

Do you reject the Lib Dems ?

And all their works ?

And all their empty tuition fee promises ?

You (almost) have to feel sorry for Clegg and Co. Traditionally the Lib Dims have been able to be all things to all men, able to make what promises they would - as they'd never have to live up to them. Must have been quite a shock when they found they had some real power, even if a lot of it's negative - stuff like maintaining foreign aid and not taking a blowtorch to the human rights act. I'm not sure Cameron is twisted with regret about any of these, mind - but he can cite Lib Dem indispensability to any neanderthal back-bencher who'd like to see Learco Chindamo decorating a Tyburn tree rather than consulting his tax-funded lawyers yet again.

The Lib Dem ministers have bitten the bullet manfully and their MPs have (mostly) stayed onside. Amazing what the official cars and the government boxes will do. Given their current poll ratings, mind you, it would be a foolish move for them to bring down the government now.

"One of the most striking features about the wave of demonstrations rolling across the country at the moment is the sheer pleasure on the faces of many of the young marchers."

That's the same sheer pleasure you'll see on the faces of EDL demonstrators in Preston, a hundred-strong group of football supporters up for a weekend in Blackpool, on the streets of Paris in 1968, Genoa in 2008, or Nuremburg in 1936. Paris in 1789, Athens in 2010 or Rome in 1922.

It's the pleasure of being in a large group - the larger the better - with something to unite you and (preferably) an enemy to hate**. Anti-capitalist in Genoa, anti-Jew in Tsarist Russia, anti-Catholic in London.

It's the intoxicating power of the mob.

** 35 years ago at West Brom's Birmingham Road end, there was a call-and response chant as follows :

"The Key Quality of Social Awareness"

Regarding magistrate applicants, does the key quality of social awareness cover the need for local knowledge?

Social awareness, as I'm sure we all know, is one of the six key personal qualities looked for in new magistrates. I'd been hoping that 'legal awareness' was in there somewhere, but maybe you pick that up as you go along.

I wonder if my comment was perhaps a bit too cynical?

Well obviously 'social awareness' (as opposed to the old-fashioned, outmoded concept of 'legal awareness') is a key competency for the modern magistrate. The question is, should a knowledge of social conditions in a particular location inform that social awareness or not ?

I'd imagine the correct answer is 'Yes'.

An example would be a case where a minority youth is charged with an unprovoked assault on a stranger. Apart from the broader social context of historic slavery, oppression, racism etc by the host community, something that every magistrate should be aware of, should he also be aware of the local context - let's say a recent EDL rally in the area and the concomitant ratcheting up of rhetoric against minorities, resulting in justified local anger, albeit misdirected?

Another example would be a case where a white youth is charged with an unprovoked assault on a (minority) stranger. Apart from the broader social context of historic slavery, oppression, racism etc by the host community, something that every magistrate should be aware of, should he also be aware of the local context - let's say a recent EDL rally in the area and the concomitant ratcheting up of rhetoric against minorities, resulting in unforgiveable racist assaults which must be stamped out?

After the fox snaffled our last two hens last autumn, leaving a lonely bantam cockerel widower, Susan bought two replacements - a 'full-size' hen and a pretty little black bantam. They're both good layers, and pretty soon little black hen was broody - sitting on about a dozen eggs. It was time to move her and the eggs into the 'broody box' - our mini-maternity unit where she could care for the chicks undisturbed until they've grown a bit.

She went crackers. Obviously upset at being separated from her mate, she shrieked and fussed - almost cried. A seriously distraught hen - it was heartbreaking to hear her. Usually a hen will settle back down in an hour or two - this went on for two days, at the end of which she scattered the eggs in all directions and would only sit on two. One hatched and we now have a fine hen that's the spit of her dad as far as colouring's concerned - the hens all went back together. But what a waste of potential life.

Then my wife spotted four eggs under her. Hens are supposed to get broody in spring, not winter.

She hatched one a week ago and abandoned the other eggs - we moved mother and baby into the broody box with no complaints this time. The chick will be tough if it lives - the garden thermometer hit a minimum of 12 Fahrenheit (-11 Celsius) yesterday - bare metal was sticking to my fingers. It's quite balmy this morning at 25 (-4 Celsius). 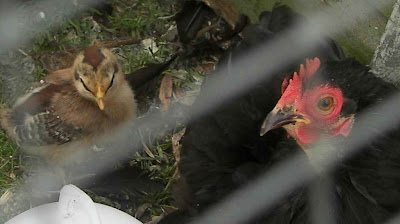