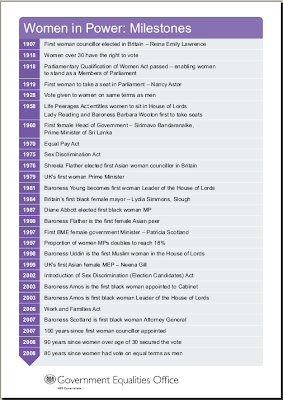 I wasn't a Thatcher fan. But I recognise that she was a tough cookie and an exceptional leader - and as Britain's first female PM, she'd have been a historic figure even without the considerable impact her governments made.

The Labour Party - or to be more precise, Harriet Harman, have just used our tax money to produce the above list of historic women in politics - all of whom are named - save the most historic of them all.

Someone tell me it's a hoax. They couldn't really be that petty - and that blatant. Could they ?
Posted by Laban at 9:46 pm 15 comments:
Labels: Labour sleaze, UK politics, your tax money at work

He wonders if the good voters of Chippenham are going to cause another 'racist' storm if they don't do the decent thing and vote him in as a Tory there. I think qq himself must be a Liberal.

The worry is that an unthinking media, steeped in churnalism, is going to end up being complicit in branding a blameless Lib Dem MP a racist for years to come simply for committing the heinous crime of doing a better job.

Everyone blamed 'Tory racism' when the Tories selected John Taylor (a black guy) as Cheltenham candidate - a relatively safe seat - and he was beaten by the Lib Dem. I've never worked out why that in itself made the Tories racist - their voters maybe, but not necessarily the party. The disappointed candidate was given a peerage - and I may be being unfair to him, but the only time I've heard of him since is when he's wheeled out by the BBC to opine on the exact degree of racism in the Tory party that week. With friends like that ...

There's also the factor of the local guy vs the outsider - particularly a high-profile outsider. Country folk aren't so keen on that kind of thing, safe seat or no. Labour can parachute in a Shaun Woodward to St Helens or a Mandelson to Hartlepool and their voters dutifully vote accordingly. Not so in the sticks. W E-J, a decent, patrician and beautifully spoken old-school Tory type, had better not assume it's a shoo-in.
Posted by Laban at 9:08 pm
Labels: UK politics

Tooting Muslims advised to walk in groups to prayers during Ramadan.

Elsewhere in London - "Large gangs of Bengali and Somali youths have been clashing in running street battles in London’s East End, eye witnesses have reported."
Posted by Laban at 10:50 pm 4 comments:
Labels: the contradictions inherent in the system, UK politics 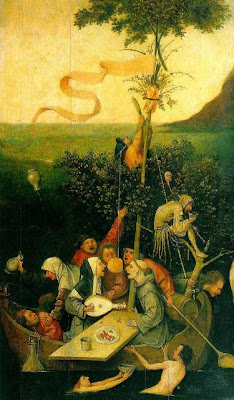 "On reading of the young British Muslims who were found guilty of conspiring to murder countless hapless civilians as they crossed the Atlantic in commercial airplanes, I was struck by the similarities with what they intended to do and the way NATO is behaving in Afghanistan".

Penny Red lives in London. She doesn't get out much :

Her "isn't it great that the Prime Minister is mentally ill ?" post romped home in the "With Friends Like These" stakes earlier today. She then repeats it at Liberal Conspiracy. I'm not sure they've got the hang of this 'cultural hegemony' thing.

British Muslims unite in solidarity after the disgusting murder (allegedly) by black schoolchildren of a Muslim grandfather in front of his three year old granddaughter (there has since been another attack - there were also some before the murder).

"Well done those black boys ! That's one less shia rawaafid beating his chest on the streets of tooting on december the 17th this year ."

The writer is a Sunni Muslim - he's referring to the Ashura processions and the practice of mataam. Poor Ekram Haque was a Shia Muslim.


All this individual craziness pales into insignificance beside collective insanity.

The UK may have to cut emissions of greenhouse gases by 90% by 2050 so the aviation sector can continue to grow. That is the warning from the government's official climate advisers, the Climate Change Committee (CCC).

It would mean even bigger cuts than the 80% drop on 1990 levels already planned for households and industry in Britain.

Our rulers are insane. 80% was in the realms of fantasy, now 90% ! I suppose one ridiculous figure is very like another. Why not go for 95 ?

The only way this could possibly happen is with a massive, unprecedented nuclear build - but we're closing all the plants and handing over any new build to foreigners. But the government's new energy guru, David Mackay, is looking forward to 'the industrialisation of large areas of countryside' in this BBC interview, as we cover the land with windfarms which won't work on still days, and Wales with hydro schemes. Were there any quick wins on hydro they'd have done the dams already. Scotland does have enough hydro to provide at least a decent chunk of its energy - but it'll be independent by then.

Buy generators and candles. We're going to need them.

The tectonic plates are shifting again.

Even the most blinkered Labour supporters are opening their eyes. Jackie Ashley on Labour woes :

It may mean a decade, or more, in the wilderness, with only a fragment of a local party to sustain them; with no real media interest and without the money to run research groups, campaigns or conferences.

And if the philosophy of Jon Cruddas is any guide, there are no new ideas to sustain them, just the same old Guardianista/Helena Kennedy platitudes :

We no longer live in communities in which people share the same customs and culture. But the ideal of community with its ethics of reciprocity and solidarity remains as powerful as ever- especially at moments of crisis. We seek a mutual respect that grants self esteem, and creates a sense of belonging.

We'd all love a sense of community alright. Well spotted, Jon. But that's just what we haven't got. And who brought that about, Mr Cruddas ?

Yet are the Tories building a mass opposition ? Is Tory Blair pulling in more committed activists ?

David Cameron's charm offensive has failed to attract new members to the Tories – or keep hold of tens of thousands of people who were already in the party when he arrived. Local Conservative parties have lost almost a quarter of their rank-and-file members since Mr Cameron took over in late 2005.

Although the Tories have enjoyed a huge opinion-poll lead for several months, they have not been able to translate the surge in popularity into an increase in membership on the scale experienced by Labour during Tony Blair's early years in charge. The total membership in more than 200 constituency associations – barely a third of the overall number – who provided relevant figures to the elections watchdog fell from 185,000 to 145,000 between December 2005 and December 2008. The constituencies experiencing falls include "safe" seats, the bases of shadow Cabinet members and target seats that must be taken if the Tories are to win the next general election. In Mr Blair's first year as Labour leader, his party's membership rose by over 100,000 to 320,000.

One problem is the Grim Reaper. The decent old boys and blue-rinsers (aka frightful racist bigots if you're on the left) are slowly being winnowed away to join their forebears. Along with good Old Labour, the Tory representatives of British culture as it was before the 60s revolution are leaving us.

And what will British politics look like in the future ?

Outside its upper echelons, the parliamentary Labour Party has never been shorter of talent – and that is before the departure of 100 or more retiring MPs and goodness knows how many others who will lose their seats at the general election. Labour MPs’ morale is by all accounts still at rock bottom after the expenses scandal. At the grass roots, Labour is in a terrible state, its membership dwindling and disillusioned and its local government representation weaker than for 30 years. The trade unions are worse led and shorter of cash and activists than at any time in living memory. There is little sign of intelligent life among the left-leaning think-tanks ...

What’s worrying today is that the never-say-die spirit is so notable by its absence. At every level, Labour seems tired, resigned and confused, and there’s no new generation of activists waiting in the wings.

In Defence Of Alan Duncan

Not often you'll hear me defending the council house grabbing millionaire who compared social conservatives to the Taleban and called for them to be 'rooted out' of the Tory party.

But at least Duncan is open and up-front about his beliefs. What you see is pretty much what you get.

His nemesis was a chap called Heydon Prowse, which sounds more like a PR firm than anything recognisably human, but who is actually a public school luvvie from Islington. Ticks all the boxes, doesn't he ?

Browse dug up Duncan's lawn, creating a bed in the shape of a £ sign, as a protest against the MPs expenses claims. Duncan, for what reason I know not (maybe he's just a nice guy - who knows ?), repaid this act by asking him to lunch. Browse turned up with a hidden recorder, and next thing Duncan's honestly and privately expressed views on the starvation diet of MP expenses were all over the media.

As a result of which he's out of the Shadow Cabinet. As Guido observes, Cameron (no social conservative himself) has watched his ratings fall and taken the appropriate action.

I understand the realpolitik of what Cameron's done, and by his leaving statement so does Alan Duncan. I guess it just sticks in the craw that Browse should pick up a scalp by his act of betrayal.

You can see why I'd make a lousy politician.
Posted by Laban at 8:19 am 8 comments:
Labels: publicans, the way we live now, UK politics

The 11 year sunspot cycle reached a minimum around December 2008 - and seems to have stayed there. The spot which appeared on August 31, after 51 clear days, just missed last year's 52-day record - the longest spot-free period since 1913.

Maybe it's just coincidence that the snow in Scotland was better this year than for ages, and that the summer wasn't a terribly hot one either. But we live in hope, or I do - while I love an English, fluffy-white-cloud summer day, bit of a breeze, I find those baking cloudless days we've been used to over the last decade quite oppressive.

The next Dalton minimum, if not Maunder minimum, can't arrive too soon. Bring on the Frost Fairs !

UPDATE - I'm an agnostic on the current global warming mullarkey. Although it's obvious that chucking a load of CO2 into the atmosphere isn't going to make things any cooler, it's difficult to sort out the facts from the religious fervour of the warmists. Take a look at the site of the late John Daly for some of the arguments. But I'm in favour of the precautionary principle of trying to reduce emissions - my nightmare being some kind of runaway feedback loop. Mars was a wet planet once.