Hmm. Chap gets shot in Oldham on 9th July - one Mohammed Junaid Khan. Suggestions that the killing might possibly be linked to another shooting - that of one Nasar Hussein in Salford the week before.

Now a Mr Amran Khan has opened his front door in Glodwick and been shot to death.

What exactly is going on up there ?
Posted by Laban at 10:03 pm 10 comments:
Labels: the way we live now, UK politics

"They live in a politically parallel world where everyone they know believes the same as they do."

Believe it or not, this is Guardian columnist (and now BBC correspondent - iPlayer link) Gary Younge. He's not talking about the Guardian or BBC - he's talking about the American Right. My cognitive dissonameter is off the scale. Tu quoque, Gazza !

Not that the Left hasn't got a few people who see things in that blinkered way. Gary's nowt if not fair.

The left has such people too, but they are marginal. With no news channels to promote them or Congressmen prepared to advocate for them, their views rarely reach the mainstream.

No news channels ? To be fair, he's talking about the US, where that might be the case (apart from the New York Times, Washington Post and the ill-fated Air America) - but he must be aware that in the UK the Guardian, Indie and BBC ensure that a Polly Toynbee could have a 30-year career and never hear a dissenting voice - at least until the Guardian introduced comments and a tsunami of criticism was unleashed.


Hat-tip - DB at Biased-BBC.
Posted by Laban at 8:00 pm 6 comments:
Labels: the contradictions inherent in the system, UK politics

A man who murdered his 85-year-old neighbour in a "merciless" attack in her home has been jailed for life. Robert Tozer pleaded guilty at Hull Crown Court to killing Joan Charlton in West Parade, Hull, in June. The judge recommended Tozer, 20, spend at least 22 years in jail before being considered for parole.

Humberside Police had described the attack on Mrs Charlton, in which every bone in her face was broken, as "sustained and brutal".

As chance would have it, the BBC report is somewhat light on the unpleasant detail.

He repeatedly assaulted her with a bottle in the living room before searching upstairs for cash. Tozer came back downstairs to discover the injured pensioner trying to reach the phone in the hall to call for help and launched a merciless attack. He stamped on her head, cut the phone line, deactivated the fire alarm and tried to set fire to her body despite knowing she was still alive.

All the reports, except the BBC, point out that Tozer had been released from prison just weeks before (for attacking someone with a pool cue). At that point you assume he was freed early - isn't everyone these days ?

Tozer, who was sentenced to life for Mrs Charlton's murder at Hull Crown Court yesterday, had been released from prison early after serving five months of a 15- month sentence for assault, one of two previous convictions for violence.

I see you only serve a third, rather than half - when did that happen ?

Chalk up yet another death to our Probation "Service".

at Biased-BBC.
Posted by Laban at 8:12 am No comments:
Labels: BBC bias, UK politics

via Edwin Greenwood, this wee tale.

Mass brawls broke out between Muslim and white groups on the streets of Swansea on the eighth anniversary of the 9/11 attacks.

Around 60 people were understood to have been involved in the two connected incidents outside Swansea City Mosque on St Helen's Road and Sin City nightclub on Friday night.

Pah ! A Friday night skirmish. Far more important is this :

The ex-girlfriend of Ospreys star Mike Phillips has told of her heartbreak over his alleged relationship with chart-topper Duffy.

Former Miss Wales Claire Evans told a Sunday newspaper that she was devastated when the British Lion dumped her for the singer.

Miss Evans, aged 26, had been with the Ospreys' scrum half for eight months before the break-up.

"his alleged relationship with chart-topper Duffy". Hmm. Tall, powerfully built, strong-featured - have they ever actually been seen together in the same room ? 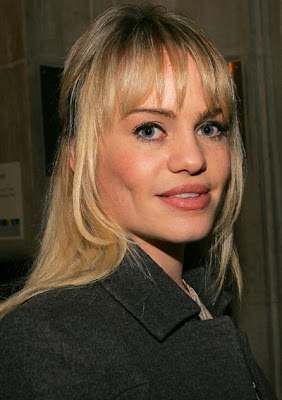 Good hands, likes a bit of niggle at the back of the scrum and to wind up the opposition. 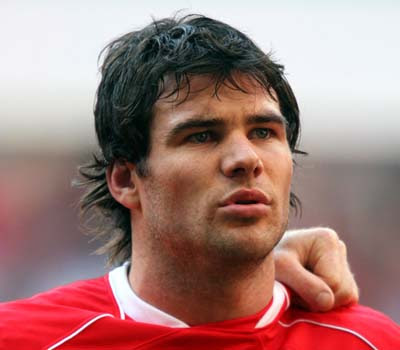 Powerful singing voice. Can drag a number out of the Bacharach and David songbook by its collar and dump it forcibly on the turf.

While we're in the Land of My Absent Fathers, who's the cretinous chav who bust the Big Apple? 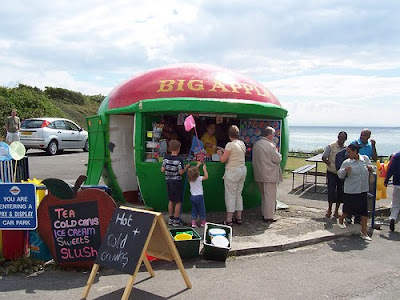 The owners of a landmark snack bar in Swansea Bay, which dates back to the 1930s, say its future is uncertain after a car crashed in to it. The 'Big Apple' has welcomed visitors to the Mumbles' Bracelet Bay for generations, selling gifts and food from the concrete kiosk.

But it has been left extensively damaged after being hit by a Ford Fiesta car on Monday. Its owners say engineers are still assessing whether it can be repaired. The apple kiosk was originally built as a stunt to promote a drink at sites across Wales and England. It is thought to be one of the last of its kind still in use.

But the owners, operators of the Mumbles Pier, say they are now waiting to see if the apple can be repaired. "It has basically demolished the whole front half of it," said John Bollom, the manager director of the pier company, Ameco. "We can't work out how to put it right at the moment - the construction of it was very unusual. It would appear that it was made in some sort of big mould with concrete and steel poured in to it. It's a very substantial structure and repairing it is not going to be easy at all."

South Wales Police said a 21-year-old man is being investigated for possible driving offences in relation to the incident.

There's a video here. But the BBC have merely reported on the Apple. The point is to save it.

Sign the petition to save the Big Apple.
Posted by Laban at 9:20 pm 3 comments:
Labels: UK politics, wales

At Biased-BBC.
Posted by Laban at 8:17 am
Labels: BBC bias, UK politics

The SIOE and EDL people haven’t sprang up as a direct result of terrorism, otherwise they’d have started in July 2005. They’ve become more prominent recently because the rhetoric around Muslims taking over, the “demographic problem of Muslims”, the growing number of mosques etc has become fever-pitch, especially in the mainstream media. The kind of people who now daily scream about how many kids have Muslim names or how their babies are swelling in numbers are to blame for this hysteria.

- Islam is the second religion in the UK with about 2.5 million Muslims
- The Muslim population of the UK has grown 30-fold since the beginning of the 1980s
- the name Mohammed is the second most common name in England and Wales and by far the most popular name in both London and the West Midlands. 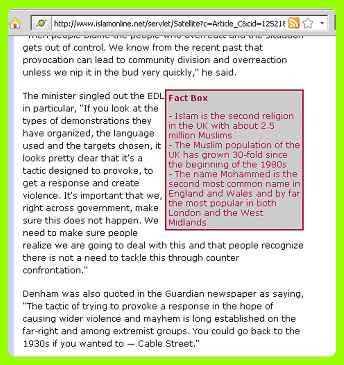 I've got no idea if the above stats are correct - although I write about demography a lot, the ONS don't split the figures by religion - or ethnicity, except on rare occasions. But as we can see, it's not just the Mail and Telegraph who big up the Muslim numbers.


UPDATE - to be fair, having read Sunny's post on events at Harrow it may be that he includes the Islam Online people in his bestiary of "daily screamers".
Posted by Laban at 7:50 am
Labels: demography, the contradictions inherent in the system, UK politics

"you are now an adherent of a religion which respects women"

Well, up to a point, Judge Antony Goldstaub QC - unless I'm wrong, I think it's still permitted to rape women captured in war.

Judge Anthony Goldstaub QC sentenced Stuart Wood for seven years for the attack, then told him: 'You have turned to Islam and this promises well for your future, particularly as you are now an adherent of a religion which respects women and self-discipline.'

You know, he may be right. It all depends on whether Mr Wood is sincere or whether he just wants to be with the biggest gang inside. He's certainly got plenty of sins to repent, but sometimes those saved from a life of sin can be the most zealous converts.

The judge added that Stuart Wood, who had previous convictions for indecent assault on underage girls and for violence, had shown no remorse and still protested his innocence about the attack in August last year in Colchester, Essex. He added that Wood had achieved the humiliation he intended on his victim.

Wood, of no fixed address, pleaded guilty to assault causing actual bodily harm. He was jailed for seven years for rape, nine months for ABH and three months for common assault, making a total of eight years. He will be on the sex offenders' register indefinitely.

Harrow On The Hill 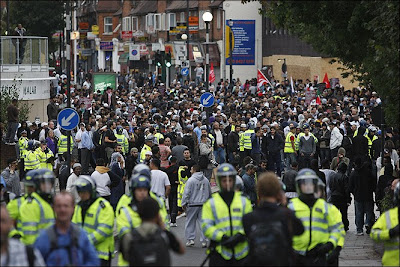 When melancholy Autumn comes to Wembley
And electric trains are lighted after tea
The poplars near the stadium are trembly
With their tap and tap and whispering to me,
Like the sound of little breakers
Spreading out along the surf-line
When the estuary's filling
With the sea.

There's a storm cloud to the westward over Kenton,
There's a line of harbour lights at Perivale,
Is it rounding rough Pentire in a flood of sunset fire
The little fleet of trawlers under sail?
Can those boats be only roof tops
As they stream along the skyline
In a race for port and Padstow
With the gale? 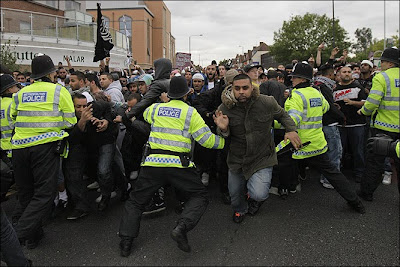 UPDATE - the Pub Philosopher asks - who was doing the rioting ?
Posted by Laban at 7:31 pm
Labels: the way we live now, the way we were, UK politics
Newer Posts Older Posts Home
Subscribe to: Posts (Atom)