.. celebrates two million hits. Even with PC Copperfield having jumped ship to the land of the not-so-free, absolutely required reading for anyone interested in the sharp end of the law and order debate.

Others have barged through the door he kicked down - Inspector Gadget, Nightjack, MetCountyMounty, PC Bloggs, Sergeant Simon and others on the blogroll - but Dave started the ball rolling.

(Declaration of interest - I was a fan anyway, but was chuffed to find myself described in his links as a 'superior conservative blog'. I noted in his book a P J O'Rourke quote - to be fair, I think PJ was quoting someone else - which I like to think he got from here)
Posted by Laban at 9:48 pm 16 comments:
Labels: blogging, tough on crime

Massacre of the Comments

Abortion promoter Ann Furedi was writing in the Guardian yesterday on how 200,00 abortions a year (compared with around 693,000 live births) are really quite a Good Thing. There were some interesting comments - 50-odd, so Laban chipped in with his four penn'orth.

This morning there was only one comment - mine - and now even that has gone. Hardly any on the whole site now. Comment is Free seems to have turned into Comment-Free. Even Herod only deleted the first-born.

When I was writing my post on abortion, sex-education and demographic change I'd forgotten a conversation I'd had a couple of weeks back with a Catholic educator and committted Labour Party man, who was still active in education in a large Northern city. A decent sort. Two things he told me that stuck - one being that the area where he'd been a head for umpteen years was bedevilled by white flight - parents applying to out-of-area schools, the other being the increasing pressure from Muslim parents for single-sex secondary education.

I can completely understand that - they look at the native girls and think - "I don't want my daughter growing up like that".

Just so would a Victorian father have felt, could he have seen the future. Victorian secondary schools were nearly all single-sex. In those cities where the old buildings survive, you may still see schools with entrances marked 'Girls' and 'Boys'.

The 2006 ONS Birth stats (pdf) are the latest available series - and more than ever they show the demographic transformation of our great cities. Children born to foreign-born mothers make up 22% of babies born in England and Wales (Table 9.2) but it's the city figures which are telling.

Table 9.5 gives us total fertility rates by country of birth of mother. While they differ somewhat from Richard Berthoud's 2001 calcs, which were I believe based on ethnicity rather than country of birth, the pattern is clear.

I think, given these stats, that

a) demographic change is likely to bring about a lowering of the abortion rate, just as it's already seen a raising of the birth rate. I expect to see the number of abortions start to fall in the next few years, as the number of young people from non-aborting cultures rises, and the number from aborting cultures falls. Truly the sexual revolution contains the aborted seeds of its own destruction.

b) this lowering of the abortion rate will doubtless be hailed as a triumph by Ann Furedi and the rest of the sex-ed/abortion industry.

c) but it'll be a very short-lived triumph. In our major cities the pressure for single-sex secondary schools will become irresistible as more and more voters call for them. Those single-sex schools will NOT have a Furedi-style sex-ed policy - the policy is far more likely to be a Victorian-style - 'don't even talk about it, let alone do it' policy - especially in girls schools. Of course single-sex schools and Victorian sex ed worked pretty well for the natives once - before they learned better.
Posted by Laban at 5:47 pm
Labels: abortion, demography, we're not having kids 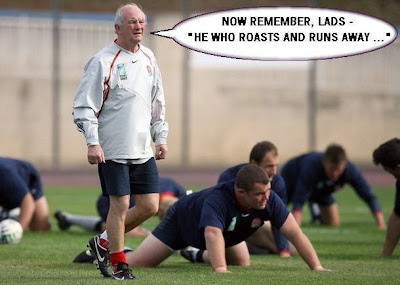 Posted by Laban at 7:43 am No comments:
Labels: rugby, the way we live now

Next week : "Body found in cemetery"
Posted by Laban at 10:17 pm 4 comments:
Labels: the contradictions inherent in the system, tough on crime

I Believe That Children Aren't Our Future ...

Big increases in children killing children - to be fair, this only parallels what's happening outside on the streets. 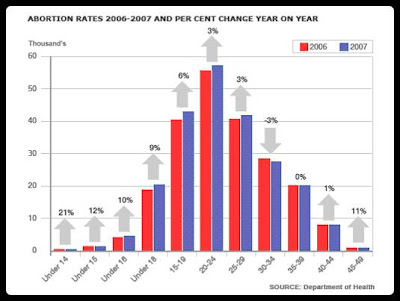 I wonder what the solutions to this great problem are. They wouldn't by any chance involve more, earlier and compulsory sex education ? There are a whole lot of tax-funded types just itching to get the message across to younger and younger kids. After all, that's the classic liberal solution.

"Whatever you did before that didn't work, do more of it"

Let the BBC tell us about a few :

Gill Frances, chair of the Teenage Pregnancy Independent Advisory Group, said: "We know what works to reduce abortion amongst teenagers. We need high quality sex and relationships education at school and at home and effective contraception."

Ann Furedi, chief executive of the British Pregnancy Advisory Service, said: "Much more needs to be done to equip young people to deal with the complexities of their personal relationships and to empower them to ask for high quality, user-friendly forms of contraception without embarrassment.

Quite right, Ann. Double doses of empowerment to be issued to all schools, and a rolling programme of upgrades to the equipment needed to deal with the complexities of their personal relationships !

(I digress - but surely the relationships between young males and young females are some of the least complex relationships on the planet - at least as far as the young men are concerned ? Ann's mum obviously never told her that 'they're only after one thing !')

Julie Bentley, chief executive at the FPA (Family Planning Association) said sex and relationship education should be compulsory in every school. "Younger women are making different choices about their lives and choosing abortion over motherhood, but education and contraceptive services will stop them becoming pregnant in the first place."

"Choosing abortion over motherhood", eh ? Just like some young men choose rape over temporary celibacy ? I guess its just a "different choice", after all ... for the person doing the choosing.

The strange thing is that all this nonsense is contradicted by the evidence of one UK community. They are characterised by what Ann Furedi and Gill Francis would doubtless consider extremely low quality sex and relationships education - namely "don't do it" - the sort of sex education that worked remarkably well for the British for the last 500 years, even when contraception was almost non-existent. Somehow around the early 70s we decided that Gill Francis had the right idea after all - and bastardy, sexually transmitted infections and abortions have been rising ever since, in tandem with a falling birth rate.

What would also be interesting would be a breakdown by ethnic group. We know that more than 23% of schoolchildren are ethnic minority. We know that the Indian and particularly the Bangladeshi/Pakistani communities have low rates of sexually transmitted disease and high rates of fertility. I think it highly unlikely that they're having many abortions - although their (native) girlfriends might.

So it appears that the shrinking native population is having ever more abortions while the incomers are having ever more babies. Keith Ajegbo's "British Lessons For English Children" report tells us that "in 10 years time, 15% of the workforce will be Muslim".

Some marketing geek at Lloyds TSB has been looking at the data and drawing his conclusions. These guys are paid a lot of money to do the figures. Double click to see it full size. 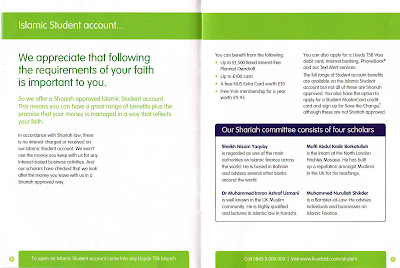 Posted by Laban at 9:42 pm
Labels: abortion, canary in the coal mine, demography, families without fatherhood 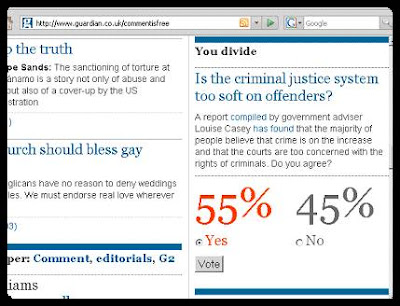 "Continual dropping will wear away a Stone--ay, more--a Diamond"
Posted by Laban at 9:57 pm No comments:
Labels: tough on crime, white liberals

How not to lose a game of rugby ... Wales v France in the U20 World Cup last weekend.

Wales are playing New Zealand at Rodney Parade even as as I type ... NZ are hot favourites but hope springs eternal. England play SA at Cardiff - another tough one. Lets hope the only things being roasted tonight are a few chestnuts, eh ?
Posted by Laban at 6:48 pm

My youngest son played cricket this evening (they lost quite heavily), came back at gone nine, ate, watched the last few minutes of the footy, then teeth and bed. Someone mentioned Greenwich Mean Time - I can't remember why or in what context.

A longish discussion/lecture followed, taking in how to reckon noon time (when the shadows are shortest), why there are sixty minutes in an hour and sixty seconds in a minute, the formation of the Royal Society and the Greenwich Observatory ...

"Where did language come from ? How is it we say 'wood' for wood ?"

"How was electricity discovered ? Who thought of it ?"


My middle son used to throw this kind of stuff at me when it was bedtime and he didn't want to go up - he knew that I could never resist an answer (and he's doing maths and science A-levels after his GCSEs) - and I can't. I'm delighted when they ask questions - especially largeish ones.

I try in answering to emphasise that there are very few giant leaps (the mp3 player did not appear out of nowhere), that each new step is usually based on what went before, that simple things which make other things possible - the wire, the screw - could only be invented given the work of predecessors. You can't invent wire before you've got metal.

It's asking questions and trying new things that's taken us this far. In the days when we were bashing animals (and each other) on the head with flint axes, who had the idea of crushing two types of rock together, mixing with sand, heating the lot then blowing air through the hot rocks ? Yet it's a good job someone did.

I keep six honest serving-men
(They taught me all I knew);
Their names are What and Why and When
And How and Where and Who.