Why Aren't The Bank of Scotland Frauds ...

as documented by Ian Fraser, being picked up and run with by bloggers of left and right ? Fraser has loads of stuff - absolutely top grade journalism.

In the light of the many dodgy dealings of BoS staff, the unsolved murder of business manager Alistair Wilson raises unpleasant possibilities. Maybe the police need forensic accountants rather than DNA samples.

Here's the One Voice group for the victims of one set of frauds - Vavasseur.

The almost unbelieveable - but true - story of BoS executive Lynden Scourfield and BoS Reading is here. The basic modus operandi seems to be

b) BoS recommend firms use 'turnaround consultants' Quayside Corporate Services, or else appoint Quayside personnel onto their boards as directors. Threats to withdraw lending if firms are reluctant to accept this advice.

c) once the nominees are in place, BoS hand over large loans.

d) nominees extract as much cash as possible while driving the businesses into bankruptcy, often picking up the distressed assets themselves at firesale prices. Small business owners lose everything.

You couldn't make this up. The FSA stinks to high heaven for its failure to nail the perpetrators.

Apparently the Reading branch of the Bank of Scotland is "with you all the way". But they never said where to.
Posted by Laban at 2:12 pm 8 comments:
Labels: tough on crime, UK politics

(an occasional series on the phenomenon of urban hipsters, right-on rebels or PC exemplars who for whatever reason need to get away from the vibrant multicultural melting pot of the city to a leafy, white and conservative area).

It may not be so leafy or conservative (in fact Fremantle is a leftie's dream city - Green MP and all), but I forgot this one - once never-off-the-box Ben Elton has 'done a Darcy' and gone to Australia.

Can't work it out - he donated all that cash to the Labour Party, yet this son of Catford seems not to like the end result.

I was under the illusion that Australia was a lot more diverse (in the UK sense) than it actually is. All the Sydney strife about Cronulla and 'uncovered meat' might create the impression of a UK situation. In fact the Aussies' insistence that immigrants bring with them from the old country useful things like degrees and in-demand skills means that 'Asians' in Oz are 'predominantly Chinese, Vietnamese, Filipino and Indian'. Only 19,000 of the population, for example, were born in Pakistan.

I don't get the impression, either, that there's a huge disconnection between the birthrates of 'native' Aussies and those of incomers - though I haven't seen the figures.

Elton's choice of Fremantle is more diverse (in an Australian sense) than most :

"For a city of small size, Fremantle is very diverse. Only 64% of the population was born in Australia. The largest overseas-born population groups come from the United Kingdom, Italy, New Zealand, Ireland and Germany. There are also sizeable Portuguese(Madeiran) and Croatian communities."

Hmm.
Posted by Laban at 9:06 am
Labels: the contradictions inherent in the system, UK politics, white liberals

I mentioned among my many favourite female singers Nico and "another Anglo-Saxon princess with a harmonium, folkie Helen Watson of Muckram Wakes."


I also added their Squire of Tamworth and Harry Belafonte's Suzanne - much better than the Leonard Cohen dirge. And Ms Watson has changed her name, but is still a princess.
Posted by Laban at 11:42 am 1 comment:
Labels: music

"failing to show a commitment to equality and diversity"

I'm just wondering how the NHS suspension of Christian nurse Caroline Petrie in Somerset (for offering to pray for a patient - which apparently shows a failure of 'commitment to equality and diversity') sits with this NHS poster in Tower Hamlets. 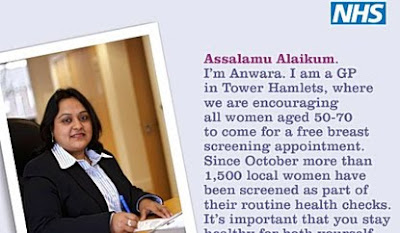 (the poster is in the news because Dr Anwara Ali, a local councillor as well as NHS pinup, has defected from Labour to the Tories)

If wikipedia is correct, the Arabic phrase Assalamu Alaikum ('peace be upon you'), while sometimes used by Arab Christians and Jews, is essentially a Muslim greeting.

Still, mustn't carp - she could well have been in a hijab or burka. Just along the road in Brick Lane people are eagerly awaiting the installation of their hijab gates, part of a council-funded 'cultural trail' which starts at a sixty-foot steel minaret affixed to the Brick Lane Mosque.

A spokeswoman for the council said the concept behind the arch was "loosely based on the sculptural form of a headscarf, reflecting the many cultural backgrounds that have occupied and sought refuge in and around Brick Lane over the centuries".

Using planning-gain funds paid to the council following the development of Bishops Square and Spitalfields market, the trail is intended to bring more tourism into the area and smarten it up. But locals complain that the focus has been too much on the Bangladeshi community, which makes up a third of the Tower Hamlets population.

At the centre of the trail is a 29 metre high minaret that has been attached to the Brick Lane mosque, a grade II listed building originally built in 1742 as a Huguenot church, then converted into a synagogue and now the Brick Lane jamme masjid [mosque]. Tower Hamlets council says the structure "is not a minaret" but a "large steel art sculpture".

Posted by Laban at 6:44 pm 19 comments:
Labels: the contradictions inherent in the system, UK politics, white liberals, your tax money at work

I was late when I first met my clients, the Lipkin family, outside my office. I was very late. I couldn't believe I was late.

I felt like an imposter. Maybe I was an imposter. I had dressed as professionally as I could: a sophisticated sports jacket, slicked-back gelled hair, elegant briefcase. My straightened posture exuded the charismatic confidence of a seasoned attorney. In my mind, at least.

I extended a hand and introduced myself to a family that was about to have their home foreclosed upon.

I was hoping they would never guess that despite being a licensed attorney two years out of law school, I was utterly paralyzed with fear—and earnestly praying to Allah that my potential clients were not about to call me out as an incompetent charlatan, punch me in the face, storm out of the office, and call the state bar seeking to disqualify me.

I was the guy who was going to save these people from being evicted from their own home? Who was I kidding?

In reality, "my law office" was actually my friend's office, which he'd lent to me so that I could meet these clients. The classy jacket had been purchased at a clearance sale in an outlet store at the Great Mall in Milpitas. The gel was the last remnant of a decaying and potentially expired bottle I'd probably had since college but never found the opportunity to use. The briefcase was a gift from my relatives in Pakistan—who, much like the rest of my family, were thoroughly shocked that I had passed the bar exam and become a licensed attorney. My business cards had been printed for free by Vistaprint, and despite having a professional front side featuring my name in bold letters and the words ATTORNEY AT LAW, the back side glared BUSINESS CARDS ARE FREE AT WWW.VISTAPRINT.COM!

Anyone who can make a US attorney into a sympathetic figure is surely a talented writer - but is he a talented lawyer? Wajahat Ali's first case.
Posted by Laban at 7:40 am No comments:

The "Blair generation" will be the best educated in history, the school standards minister, David Miliband, promised yesterday.