Not exactly six days, but a week of 9-hour-plus days (plus three hours drive - 700 miles of commuting) might have something to do with my sparse blogging... nice to be home.

The Golden Age That Never Was ... 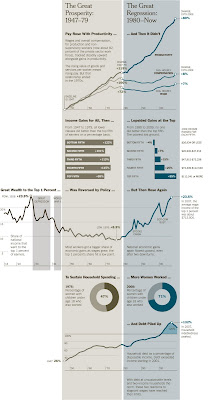 And the Plastic Age of the last 30 years.

b) women joining the workforce

I'd hazard a guess that the Thatcher, Major and Blair years would have paralleled this pretty closely.
Posted by Laban at 6:54 am 9 comments:
Labels: UK politics

Anything Going On In NY ?

My son reports that (a/c/t Twitter) there are protests outside the New York Stock Exchange which are not being reported in mainstream media.

Any truth in this?

UPDATE - well, Businessweek seems pretty mainstream to me. Maybe Twitter is just ahead of the MSM - as you'd expect real-time media to be.

“People have a right to protest, and if they want to protest, we’ll be happy to make sure they have locations to do it,” New York City Mayor Michael Bloomberg said Sept. 15 at a press conference. “As long as they do it where other people’s rights are respected, this is the place where people can speak their minds, and that’s what makes New York, New York.”

As the demonstration began this afternoon, as many as 1,000 people congregated in the Chase Manhattan Plaza area and, after speakers with a bullhorn rallied the crowd, broke into groups to discuss the event’s goals. Some participants circulated trays of sliced white and wheat bread while others passed out jars of creamy Skippy peanut butter, and distributed apples, bananas and oranges from shopping carts.

Protesters waved red flags and toted cardboard signs with statements such as “represent the 99%.” Others donned white, mustachioed masks of the anti-authoritarian protagonist from the graphic novel and film “V for Vendetta.”

Sounds pretty much like the usual suspects to me - in the UK there'd probably be more drummers and fewer ukeleles. But I'm not saying they're wrong to protest - a stopped clock is right twice a day.
Posted by Laban at 12:50 pm 2 comments:
Labels: capitalist pigs
Newer Posts Older Posts Home
Subscribe to: Posts (Atom)