A Guide To Glasgow Gang Websites

By Stewart Kirkpatrick in today's Scotsman is one of the most entertaining articles about the Web I've seen for a fair while. Read it and smile. In fact his series 'The Lazy Guide to Net Culture' all seem to be worth a read - loved his link to the Victorian Web.

Imagine if the unpleasant fourteen year olds hanging around the Tesco car park at all hours had a home page ? In Glasgow they have, and Kirkpatrick takes us on a tour of the sites of the Young Toryglen Toi, the Young Posso Fleeto, the Duke Street Firm and the Young Rutherglen Scheme Team ('Scheme' = housing estate).

I think we can safely say that these sites won't win many awards, but they do have a certain rude charm. How about the apology from the Young Toryglen webmaster ?

"anno this is pish the noo but ave just f*in started so bear wae me. wanst anno how tae dae s*** on this hing it will be f*n dynamite."

Which I translate as 'apologies for the current poor design as I'm only a beginner, but once I get going it'll be much better".

Posted by Laban at 11:12 pm 2 comments:
Do You Sincerely Want To Kill Children ?

Without that awful judgemental media coverage ?

Move to the West Bank and become a militant, or at worst a gunman.
Posted by Laban at 8:31 am No comments:

Could They By Any Chance Be Related ?

"Sir, I salute your courage, your strength, your indefatigability" 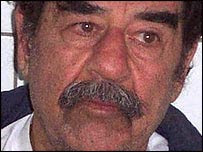 One of my recurring themes is that as we become less religious, and doctrines like the Fall and Original Sin become ever less relevant and more ludicrous to us, so we find these concepts turning up in the most unexpected places.

We are no longer all sinners against God, naturally inclined to evil - instead (as I blogged last week) "we are natural racists, polluters, misogynists, homophobes. We have sinned against our fellow man and our planet."

I missed this essay by Michael Crichton a month or three back.

"Today, one of the most powerful religions in the Western World is environmentalism. Environmentalism seems to be the religion of choice for urban atheists. Why do I say it's a religion? Well, just look at the beliefs. If you look carefully, you see that environmentalism is in fact a perfect 21st century remapping of traditional Judeo-Christian beliefs and myths.

There's an initial Eden, a paradise, a state of grace and unity with nature, there's a fall from grace into a state of pollution as a result of eating from the tree of knowledge, and as a result of our actions there is a judgment day coming for us all. We are all energy sinners, doomed to die ... "

Link via the great John Daly.

Of course, there were tensions in Christianity between the hellfire preaching strands and the more optimistic soul-savers, and these have their parallels on the modern Left.

A fifteen-year old car thief on a sink estate, terrorising his neighbours, tends to attract the soul-savers, those who see good in everyone. With a few anger-management classes, driving lessons and trips to theme parks, he can be saved - maybe to become a social worker himself.

The 'holy fool' Bob Holman is such a one - and he's also a Christian (though I note he's finally getting out of Easterhouse as he reaches pensionable age).

On the other hand, the middle-class white guy in the BMW, with wife, kids and newly built 4-bed exec detached, attracts the hellfire mob. His inbred racism, sexism and homophobia must be carefully monitored - and they must be always ready to challenge it. And as for the self-employed carpet fitter who aspires to the Beemer and house - there's almost no evil to which he might not be tempted.
Posted by Laban at 11:42 pm No comments:
Labels: men without religion
Bush Bashing Corporation

The capture of Saddam has to be one of those bits of news that's wholly good.

But the BBC managed in its coverage, and with its selection of impartial commentators, to find more downsides than I would have believed.

The video of the medical was 'humiliating' and would enrage macho Arab males.

WE made Saddam (obviously I don't mean good liberals like us, I mean those evil white, Christian men like Colin Powell and Condoleeza Rice).

"Don't forget the US supported Saddam for 25 years. Some of his associates are neing held in conditions that are too lenient - or inhumane" (Anas Al-Tikriti of the Muslim Association of Britain, unable to make his mind up on R5.)

If he's handed over to the Iraqis he'll be executed - so he should face an international court with Human Rights standards (which will mean he can't be executed).

If he's handed over to an international court it'll show that the US don't want Iraqis running their own affairs.

Are the US in breach of the Geneva conventions ?

The only item missing was on how the expense of keeping him might damage 'the already fragile US economy'. Maybe today.
Posted by Laban at 9:27 am No comments:

England carve out a draw in Sri Lanka - and a nation breathes again.

Oh, and some bloke with a remarkable resemblance to Alexander Solzhenitsyn has been captured in Tikrit.

Exclusive Victorian-style photograph of Saddam Hussein seconds before he was brought before a military barber. Taken by Frank Meadow Sutcliffe

Already BBC Radio have found the downside. A commentator on R5 thought the use of the words 'We Got Him !' would offend people throughout Britain, not to mention the fabled Arab Street, in a state of permanent fury after Afghanistan, Iraq, Jenin, Gloucester and other imperialist atrocities, but seemingly as hard to find as the Mi-Go of the Himalayas.

BBC correspondents raised fears about the fairness of a possible trial, and worried about photographs and the Geneva Convention. Was Saddam in uniform ?

I believe its possible for a trial to be fair and yet the verdict to be known in advance.

The children weren't so concerned. My small daughter, who's been studying the sad fate of Guy Fawkes at her Catholic primary, wanted to know if he would be racked or have his fingernails removed. The eleven year old listened to the R5 correspondent and asked 'why don't they just shoot him ?'. I think he meant Saddam.

Over the last year we have heard a mighty chorus of voices urging that Iraq be run by the Iraqi people with no outside interference. Just watch those same people urge that Saddam not be handed over to the Iraqis.

We Want Diversity Of Everything Except Opinion ....

From the Sunday Times.

"THE government is to be challenged over its “cosy” relations with The Guardian after research revealed that almost two-thirds of public sector job advertisements are placed with the newspaper.
Most of the advertisements are run in the paper’s Society section. Benjamin Wegg-Prosser, former special adviser to Peter Mandelson, is in charge of the supplement.

Between January and September this year The Guardian was given 26,175 of the 42,914 public sector jobs advertised in national newspapers, according to data from Nielsen Media Research.

The number of public sector adverts in The Guardian dwarfs those in other newspapers. The second highest recipient is the Sunday Herald in Scotland with 7,586 and third is The Voice, an ethnic minority paper, with 2,719. The Times is fourth with 1,269 adverts, The Times Educational Supplement fifth with 1,255, and The Sunday Times seventh with 802. "

And the Voice ? Dunno mate - they don't subject their sales figures to audit, as the Guardian explains. But we do get a teensy flavourette of the reason why they get more than 6% of Government advertising.

"The Voice's early sales were poor, but it was buoyed by job adverts from the newly aware London boroughs, which were willing to pour in money to satisfy their consciences, regardless of the response. "
Posted by Laban at 12:55 am
Newer Posts Older Posts Home
Subscribe to: Posts (Atom)