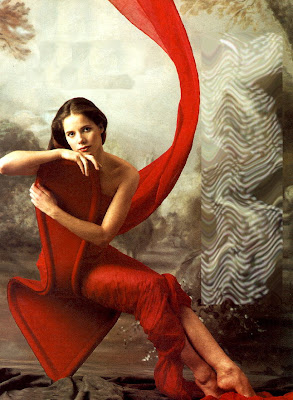 The kids are young, and Darcey Bussell is emigrating to Australia, the land of her fathers.

I think Martin Kettle's in love.

Just in front of me in a Covent Garden rehearsal studio, Darcey Bussell is sitting on the floor removing one of her ballet shoes. It is impossible not to be transfixed ... Watching Bussell up close in the rehearsal studio offers instant confirmation that the qualities that have made her special are still in full working order. The trademarks are all there - the line of her long legs, the amazing fluidity of her movement, the supple shape of her hand gestures, the distinctive way she holds her head, and the general impression, though she is 38 and a mother of two, of youthful purity. And as home-counties colonels and pubescent Darcey-wannabes all agree, she is also very, very pretty.

Home-counties colonels ? Are there any ? I think this is what they call 'projection'.

Still, never mind, eh, Martin. Darcey and her daughters will soon be replaced.
Posted by Laban at 10:32 pm 12 comments:

To 'new blogger' a load of links (i.e. pretty much all the reciprocal ones) fell off the template. Alas they have to be put back one at a time. Apologies - hopefully this weekend I'll get it sorted.
Posted by Laban at 8:25 am 2 comments:

Who can tell me why the 'labels' feature is so poor ?

I've got around 46 demography posts as of now. If you click on the label, you get about 6 returned. Is this a well-known 'feature' ?
Posted by Laban at 8:18 am 2 comments:

But you couldn't expect me to ignore this story, could you ?

The fertility rate has hit its highest level since 1980 as more women in their late 30s and 40s have babies, official figures show.

The Office for National Statistics data revealed women are having 1.87 children on average - up from 1.8 in 2005. The fertility rate in England and Wales has been rising since the all-time low in 2001 of 1.63 following an almost continuous fall since the late 1980s. But experts predicted it was unlikely to keep rising.

The upturn has been largely driven by increasing birth rates among older women. The highest percentage increase for any age group was for women from 35 to 39 which rose by 7% in a year. Fertility rates have also doubled for women aged 40 and over in the last 20 years.

Professor Danny Dorling, an expert in human geography at Sheffield University, said the changes in recent years were being driven by the change in university admissions during the 1980s. "In that period many more women started to go to university which meant that they ended up delaying having children. I believe the fall that we have seen was due to this group and what is happening now is that these women are now having children but at a later age than they once did."

Danny Dorling seems to be a bit of a Steven 'Ludi' Simpson - tame left wing academic who can put the correct spin on the news.

The full stats (Excel) are here.

The BBC fail to pass on the ONS briefing reported in the Guardian.

The figures suggest that older mothers and migrant families are increasingly making up for younger British-born women choosing to have fewer babies. Keith Spicer, the ONS statistician behind the figures, said: "It's the largest numbers of live births since 1993 and fertility is at its highest in 26 years. The story really is the older mother and the country of the mother's birth."

The Telegraph also seems to think immigration's got something to do with the boom.

I imagine these figures will show another jump next year. There are a lot of Polish girls carrying bumps around Lidl and Poundland. What we're presumably seeing is a point of inflexion, where the rising graph of babies born annually to first, second and third generation immigrants at last compensates for the falling graph of native fertility - helped of course by those 186,000 abortions per year. The personal sure is political.

These figures are of course totally unconnected to this story.

Mohammed could soon become the most popular boy’s name in the country, as more and more Muslim parents choose to name their sons after the Islamic Prophet. When all the different spellings of the name are added up, the name was second only to Jack in last year’s registration of boys’ births... Offically the name did not appear in the list of top ten boys’ names published by the Office of National Statistics, because the total number of registrations is split into 16 different spelling variations. But when added together the name has eclipsed Thomas, which now lies in third place at 5,921 registrations, and Joshua, which lies in fourth with 5,808 registrations.

The frequency of the name increased by 12 per cent between 2005 and 2006. If it were to increase at the same rate, while the number of registrations of Jacks stayed the same, it will be the most popular boy’s name in the UK in 2008. The name entered the top 30 in 2000.

Demographic experts say high fertility rates among Muslims compared to the British population as a whole are driving the increase ... Although Muslims only account for about three per cent of the UK’s population, or about 1.8 million people, their birth rate is about three times higher than the national average, say demographers.

I'm not sure how that 1.8 million matches with Keith Ajegbo's "British Lessons for English Children" report, written in 2006.

"It is estimated that in ten years time, 15% of the workforce will be Muslim."

(Over at the Guardian Ed Husain (yes, that one) plays the "only 3% of the population" for all it's worth. Given the accuracy of government immigration figures, about 3p). I wouldn't think there were many little Mohammeds or Ayeshas among the 186,416 babies "terminated" in 2006.
Posted by Laban at 6:52 am 13 comments:
Labels: demography, immigration

... "a man aged about 30-years-old, described as Arabic in appearance, 6ft tall, with short black hair and wearing a three-quarter length dark leather jacket, approached the victim from behind and pushed her head to one side. He then slashed her across the neck with a sharp instrument"

The victim was 12 years old, German and on holiday with her parents. I wonder if the attacker thought she was Israeli ?
Posted by Laban at 9:32 pm 4 comments:

is Swiss Re's Head of Life, what's their chief mortality investigator like ?
Posted by Laban at 9:24 pm 7 comments:

It must be ten or more years ago that people started noticing how many Hollywood villains were English. As PC advanced, the writers and casters were simply running out of villains. For years white South Africans were about the only people on the planet it was acceptable to hate - so when the Rainbow Nation took off in the early Nineties the culture really started scraping the barrel. Why not the English ? So Anthony Hopkins and Steven Berkoff made pots of dosh playing the roles which an earlier Hollywood gave to Gert Frobe and Boris Karloff.

On Today this morning, children's thriller writer Anthony Horowitz (11 minutes in, RealAudio), on choosing a villain :

"... it's getting harder and harder ... the Alex Ryder books are meant to be set in the real world ... when you're trying to do an up to date, modern villain there are so many pressure groups - and there is I think a greater sense of fear, of offending the wrong people, even of breaking the law now, so for example a Muslim villain - to go straight in to the deep end - I think it would be impossible now for me to produce a Muslim villain - and indeed the bad guy in Stormbreaker, the first of the Alex Ryder books, was a Lebanese buinessman - by the time we made the film last year he had strangely morphed into Californian trailer trash ... "

"Because Hollywood didn't want to take the risk"

Poor (in every sense) whites are about the only group left on the planet with no-one sticking up for them.
Posted by Laban at 10:04 pm 13 comments:

Snafu has exclusive coverage of the decision-making process at the heart of Team Cameron.
Posted by Laban at 11:43 pm 5 comments:

As "everybody knows", all this 'stranger danger' paranoia hides the fact that most murder of children takes place in the family. And the vast majority of killers are dads. Just look at all those cases of fathers wiping out their whole family.

This is all so self-evidently true that Zoe Williams wrote a Guardian column about it last November.

"Of the 99 under-16s killed in the UK between 2002 and 2003, more than half were killed by a parent and maternal killings accounted for only 5% of that total. The spectre of fathers killing their children is not one that is conjured up to spook people, then, nor is it blown out of proportion because each individual narrative is so wrenching, arresting and memorable; it is not exaggerated by vengeful single-mother feminists as a critique on the authenticity of fatherly feelings. It is a phenomenon that happens - often."

It would appear that it's been blown out of proportion, by feminists like Zoe Williams - perhaps because of the arresting, wrenching and memorable narratives.

Give the Guardian credit for not pulling the piece. It's there in all its glory, with the following correction at the top.

The following correction was printed in the Guardian's Corrections and clarifications column, Monday November 13 2006

In the article below we said that more than half of under-16-year-olds killed in the UK between 2002 and 2003 were killed by a parent and maternal killings accounted for only 5% of that total. In fact, Home Office figures for England and Wales show that killings of children by a natural parent are committed in roughly equal proportions by mothers (47%) and fathers (53%).

(Ms Williams also seems to have discounted the 186,416 kids topped by their mum in 2006. Figures from Caitlin Moran. It may be that she (ZW) took the NSPCC definition of a "father" - any male who's shacked up with mum. A child is most at risk in the setting of single mother and mum with serial live-in boyfriends.)
Posted by Laban at 10:38 am 7 comments:
Labels: families without fatherhood, patriarchy, war against boys, white liberals

"having had two children, I had an early abortion when I found out that I was pregnant with a third, and had not – contrary to what I was "expected" to feel – experienced any indecision, guilt or trauma."

I wonder if Caitlin Moran's kids are at school yet ?


UPDATE - a correspondent points out her classic "Abortion: why it’s the ultimate motherly act". Got to be up there with "I wouldn't hit you if I didn't care about you".
Posted by Laban at 10:28 am 4 comments:
Labels: abortion, we're not having kids, white liberals
Newer Posts Older Posts Home
Subscribe to: Posts (Atom)