It Would Be Hilarious If It Wan't Serious

Police are apparently 'gathering evidence' to see if there's been an offence of incitement to murder.

"Lord" Harris of the Metropolitan Police Authority, a man who knows all about creative interpretation of the law, compared the demo with BNP and National Front demos of the past. After all, some people were offended by them, weren't they ? Hear him at Today (RealAudio).

I well remember those days, demonstrating against the NF, as they marched past with their "Massacre Foreigners" banners. 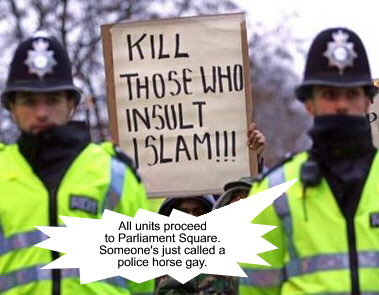 Police searching for evidence on Friday.
Posted by Laban at 8:10 am

On the report on the BBC website this morning (on the deaths of two protesters in Afganistan):

"They want to know whether Muslims are extremists or not. Death to them and to their newspapers," he said.

What is amazing to me is a couple of years ago I would have chopped off my own hand if it looked like voting tory when I got into the voting booth. Well Im cured of that, voted for an out and out Cameronite (pah!) last year. Now Im finding the idea of voting BNP not inconceivable. Just imagine the pleasure I will get from the dismay their increased vote (which of course it will) at the next major election will cause. Sometimes I think this is all a dream. *shakes head in bemused fashion*

same deal here. this whole sorry affair has finally convinced me to vote Tory at the next election.

I would vote Conservative at the next election, but seeing as Cameron has done a good job of being the total opposite of Lady Thatcher I cant bring myself to vote for a wolf in sheeps clothing.

My dad said the other day "After living in this country all my life I am now having foreigners telling me what I can and cant say, think and feel. If people dont like this country they should leave it."

Now thats not a particularly extreme viewpoint. Its a sentiment echoed by many (sane people that is). What party can you vote for that will reflect that principle?Sadly there only appears to be one and Ill give you a clue - it aint the conservatives.

My wife, a veteran of the poll tax riots and many other leftish causes celebres is talking about actually joining the BNP now, after the events of this week.

On the Tory front, I was rather heartened by David Davis's calls that the protesters on Friday should have been arrested. But then, when we voted for Dave, we knew this stuff would not reach the Tory agenda...Too bad.

I agree Laban! Actually its more frustrating for the Muslims because they want to see the bastards arrested but the police is doing nothing (thus making out that Muslims get special exemptions). I don't know WTF the police is playing at...

Many of my colleagues are considering voting BNP. A statement needs to be made, I suppose, against the ineffective mainstream parties and the blatent double standards of the police. Who are the real victims nowadays?

Of course when the BNP gets a huge boost in votes, our PC establishment will wonder why people have turned to the BNP and make facile statements about "tolerance".

I have never voted BNP but i'm moving closer to that point..the only thing that stops me is the socialism and the anti semitism

I read somewhere today that Cameron is all for curbing the powers of the Royals. Phew! That guy has so got his finger on the pulse.

What a gutless pansy!

If you value freedom, democracy and peace then please attend this mass rally in London on Saturday 11th February 2006 at 12 noon

This is your time so please, make your voice heard and show the world that you will never surrender to threats of violence

I know alot of my mates are now going to vote BNP at every possibility, im tempted. Im pretty fed up to be honest with the Muslims and immigration. And its not so far from my mind now, since they are no longer anti-semitic or anti-gay, after all they have gay members and a jewish councillor! Also i cant stand the way the media always says they are skinhead scum thugs, my friends are not, im not, we have jobs and hair! Just no other party has the balls to stand up and point out the issues.