Any Chemists or Physicists Out There ?

My daughter has a question - and not a bad one, either.

When a radioactive substance decays by alpha emission (I told you she was precocious) , the alpha article is a helium nucleus i.e it has no electrons and a positive charge of 2.

What's left has lost two protons - so its atomic number is two less and it's a new element. 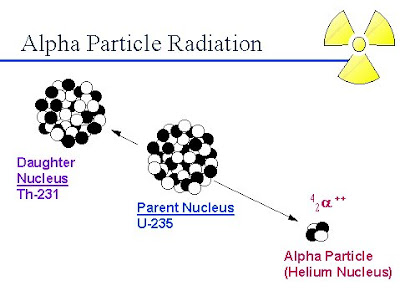 Her question is - if the uranium fires out an alpha particle, what happens to the 2 surplus electrons left on the thorium atom ? It's now got 90 protons (having lost 2 in the alpha particle) but still has 92 electrons.

Answers on the Web are :

It is possible that the two excess electrons associated with the thorium could find their way to the alpha particle and neutralize it, but this would likely not be a one-step process, since the alpha particle is emitted with appreciable velocity and moves some distance away from the decay site before coming to rest. More likely excess thorium charge is transferred to some other atoms or molecules in the system; eventually the alpha particle is neutralized as it picks up two available electrons to yield a neutral helium atom, and charge remains conserved.

When the U (Z=92) transforms to Th (Z=90) as a result of alpha decay, the two electrons are lost to the nearby medium. The decay nuclide is like surrounded by similar material, or if at the surface of a solid, it is in contact with air or some gas. Likely though the alpha particle rips away some electrons on its way out of the nucleus, but those electrons are quickly recaptured.

As charge particles (alpha and beta), and even gamma rays, pass through material, they interact with atomic electrons and excite or ionize atoms (hence the term - "ionizing radiation"). The range of an alpha particle in solid material is very small - on the order of microns, so it does not travel far from the nucleus from which it originated. Because it has a +2 charge, the alpha particle will ultimately attract two electrons. There will be an effective net migration of 2 electrons along the path the alpha particle took while slowing down.

It's an interesting question that whether the atom of the new element now have a negative two charge or does something else happen to these electrons. Electrons are not exactly static charged particles. They have a good deal of fluidity in practice, and in fact one could go as far as saying that they are inherently fuzzy objects, like a photon of light. In most solids (and even in gases) any non-equilibrium electronic state is almost instantaneously readjusted. It's rearrangements of atomic nuclei which take time (so that, while chemical reactions technically involve only electrons, any reaction which requires movement of whole atoms will have a measurable rate). Essentially what happens in a-decay is that the a-particle knocks electrons loose from one or more nearby atoms, then picks up two of the loose electrons to form a neutral helium atom. Meanwhile, the other surrounding atoms (including the "dianion" parent atom -- the scare quotes are deliberate) very quickly reshuffle their electrons in order to have the most energetically stable configuration. This reshuffling energy, by the way, shows up as heat; strong a-emitters like radium are typically a little warmer than their surroundings, and radioactive decay is a prime source of the earth's internal heat. Hope this answers your query.

So while the answers make sense in terms of charge conservation, they're all a little vague on the actual mechanics. Does the thorium atom spend time as a thorium ion ? Are the electrons lost by the thorium atom to spend time as free electrons, or do they immediately attach themselves elsewhere ? Or does that depend on what kind of atoms or molecules are around for the elecrons to attach to ?

And a question from me - at any time, how many ions or free electrons are around, say in air ? If you drew a virtual metre-square box in your living room, what proportion of the molecules therein would be ionised ?
Posted by Laban at 8:46 pm 10 comments:
Labels: science

All Liberal Life Is There ...

Cheesed off with a world where feral child-torturers get five years and anonymity on release ? From the comments on another Guardian "they're victims too " thread.

"It's the legacy of Thatcher and the Tories, their crusade against the primary industry has produced children who have grown up with parents who have never had a job"

"Society was brutalised through industrialization and the aftermath and the denial of "society" by Thatcher, and the complete social-moral disintigration she caused"

"Most torturing of small children takes place within the family"

I think in the media-fuelled moral panic about 'stranger danger', people have ignored the fact that the greatest damage done to children tends to be within their own homes at the hands of their own families.

"You're worse than they are"

"I feel that people who seem to want to inflict punishment on small children are themselves in need of treatment."

"Who knew that the true sociopaths dwell in this thread"

The all-purpose Guardian editorial seems to have been a pretty good predictor on this occasion. I see the Indie borrowed from it too :

The natural horror felt at (insert appalling crime here) should not blind us to the fact that (crime is actually falling/it is all Thatcher's fault/such crimes have always been with us).

If we surrender to (the tabloid agenda/the Daily Mail hysteria/knee-jerk populism/the politics of the soundbite) and take the easy option of (jailing more of our young people/bringing back the birch/bringing back hanging/walling off the cities then bombing them/demonising our young people) we run the very real risk of (actually achieving something/alienating a generation/an invasion of killer bees).

There is only one answer. An enormous increase in the funding of (Sure Start schemes/outreach workers/emotional intelligence mentors/youth projects/anti-racist 5-a-day smoking cessation co-ordinators).

"No cause for moral panic"

In the ongoing dialogue of the deaf which recurs whenever feral youths or children commit dreadful crimes, there are only a few liberal arguments, picked up in criminology class and amplified by the Guardian/Indie/BBC, and they come out every time.

e) "anyway, most torturing of small children takes place within the family" - not the married one it don't.

f) "you're worse than they are" - if you call for evil criminals to be punished, you're even more evil yourself !


One commenter links to this piece, about a classic Guardianista - a woman with empathy for everyone except her neighbours. Kind of reverse-Christianity.

"The outcast, the rapist, the criminal, the thug"

I had been a foster carer for just over a year when James came to us, and had worked for the council's mental health service for 10 years before that. But I wanted to help the teenagers who had been in the care system for a long time and had suffered serious trauma.

I did every training course on offer. Central Bedfordshire council was brilliant: I studied attachment theory, behaviour management, the problems caused by drug and alcohol abuse, and how to work with sexually abused children. I even did a BTec in advanced fostering.

No problem, then - all boxes ticked.

I was realistic enough to recognise that he was a danger to himself and to everyone he came into contact with, and so I was nervous about the young children who lived around us, but because I knew what a hurt, vulnerable side James possessed I wanted to believe that, deep down, he was a good lad.

We soldiered on. I refused to reject James like everyone else in his life had done, but 10 months after he had come to live with us my neighbour of more than 20 years sold her house and moved away. She told me she couldn't live near him a day longer.

Then, last July, James was accused of raping an 11-year-old local girl and forcing her to perform a sexual act on him.

So a woman is forced from her home of 20 years and an innocent child is raped - and all because "I wanted to believe".