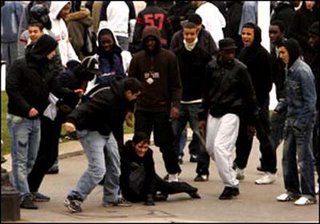 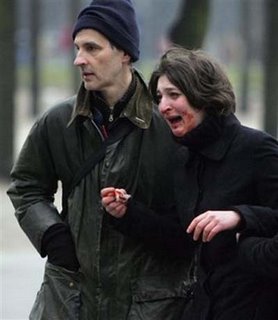 "The French do not go to the banlieues, but what they fear is that the banlieues will come to them. Perhaps it is starting to happen. My nephew and a friend of his were walking through the Bois de Vincennes, overlooked by elegant Parisian bourgeois apartment blocks, when they were set upon by two Africans and three Arabs. They were not badly injured, but at the hospital their mothers were told by the staff that such attacks, carried out not for gain but for the sheer pleasure of revenge upon the hated comfortable French, were now commonplace."
Posted by Laban at 6:36 am 8 comments:

In among the usual nagombi ("this howl of existential anxiety") the BBC's Caroline Wyatt gets the odd bit of sense in.

"To the barricades, they went, these revolutionaries, to fight for their rights - to pensions, mortgages and a steady job.

Such odd revolutionaries. No heartfelt cry to change the world, but a plea for everything to stay the same.

For France to remain in its glorious past: a time of full employment and jobs for life - a paternalistic state to take care of them from cradle to grave"

"A recent survey suggested that for most of the young in France, the real dream is to become a civil servant - a fonctionnaire. To work in government offices with regular hours, long holidays, and a 35 hour working week."

"Casseurs with hoods and masks are all around Place de la République right now breaking things and causing mayhem right now, 20h30-- stay out of central Paris if you can. "

And the Pub Philosopher on the story the MSM ignore - how, once again, ghetto youth are attacking the demonstrating 'bolos'.
Posted by Laban at 7:47 am 1 comment:

Lots of work, so a few links.

I said the other day that "one of the things I'm interested in is documenting how it all went pear-shaped, what life was like before the Fall, the cultural drivers behind the destruction, the personalities involved, and some of the original documents."

The destruction has fallen most heavily on what was once the British working class.

"And the sandcastle virtues are all swept away,
In the tidal destruction, the moral melee"

as someone once wrote. I haven't time to investigate the fascinating subject of how the MIDDLE classes, before the fall the touchstone, exemplar and ambition of the respectable working man, became the object of the hatred and scorn of the 'representatives' of the working class, themselves middle-class almost to a woman. It would be interesting to research Hansard and socialist writing to discover when 'middle-class' became a term of abuse. I'd guess 1970/80s, with a few forerunners like Richard Crossman.

Let's just look at what the working class could do for themselves, before they had an enlightened State to do it for them.

Via commenter Phil Jackson, a look at The Classics In The Slums. And Frank Prochaska's series of posts at the SAU on the voluntary institutions of the working class. Enjoy.
Posted by Laban at 9:14 am 6 comments:

I speculated a while back that "if you asked the DFES for a breakdown of primary school numbers by ethnicity (recorded by each head and reported to the DFES) the figure would be 25%+ for ethnic minorities in England."

The figure (table 47a) is 20.2%, if you include Irish and Irish travellers as natives.

2.3% of kids are "unclassified" - including mine. You can opt out of this South African style system if you wish.
Posted by Laban at 7:08 am 8 comments:


One of the things I'm interested in is documenting how it all went pear-shaped, what life was like before the Fall, the cultural drivers behind the destruction, the personalities involved, and some of the original documents.

This post will be a little disjointed, as it covers some big themes, each worthy of one or more essays - which I have neither the time nor ability to write.

At present this is a difficut task for our liberal elite. There are simply too many people alive who can remember Britain in the 1950s or even the 1960s (remember that the culture of the 1960s only spread in the 70s - and went mainstream even later, around the time Habitat stores opened everywhere. For an accurate picture of 1966 England look at the World Cup Final crowd - 95% in ties - ties ! and many also sporting hats).

But these generations - the wartime generations - are dying and will soon be gone. Mortality is even now on the horizon of the post-war grammar school boys, the people - of whom I'm one - who destroyed the culture to which they were the heirs.

So it's important to record the lives and opinions of these generations, partly for their own sake, but partly to refute the arguments of those who believe that the present is always better than the past.

Three documents - two on the cultural drivers of destruction, one on Edwardian Britain.

First the Independent on the 50th anniversary of the play "Look Back In Anger", as reviewed by the late Keneth Tynan in 1956.

"All the qualities are there, qualities one had despaired of ever seeing on stage - the drift towards anarchy, the instinctive leftishness, the automatic rejection of 'official' attitudes, the surrealist sense of humour ... the casual promiscuity, the sense of lacking a crusade worth fighting for and, underlying all these, the determination that no one who dies shall go unmourned ... The Porters of our time deplore the tyranny of 'good taste' and refuse to accept 'emotional' as a term of abuse; they are classless, and they are also leaderless."

I'm not quite sure what happened to to the underlying theme, but all the rest were representative enough - a small manifesto for the counterculture.

Another document - I must admit to never having heard of the Preston poet Alan Dent - and having read some of his stuff I wish he'd never heard of Dylan Thomas. But his "Memoria Technica" is important in that if you wanted to know what the Sixties were a revolt against, you'd only have to read this. All the themes are there. Namely :

Capitalism - indeed, paid employment of any kind - is dull and morally reprehensible. Success in this world is a token of moral worthlessness.

Here
society’s handshake was a pay-packet and slavery


Church is a dull thing that the straight parents make us do.

I want to get drunk and have sex with girls.

In its own way it's also a manifesto for change - and a manifesto triumphantly implemented - as the figures for church attendance and a walk down any High Street on a Friday night will bear out. Though not quite fully implemented - all over Preston small boys, neatly dressed, will even today trot off to their religious classes once a week, with greater or lesser enthusiasm. But they'll be clad in white, not Sunday best - and their classes are on Fridays. I can still remember the cheerful kids pouring out of the madrassa in Woodhead Road when I lived in Bradford.

What a contrast with a Victorian working man - the Blackburn poet William Billington. What was that about the working class being uninterested in education ?

("this war" being the American Civil War, which closed half the mills in Lancashire)

The third document I stumbled upon while trying to find some lyrics for an old 78 in my posession. The Hubbard family archives contain the unedited memoirs of Frances Roper (nee Hubbard), an upper-middle class Englishwoman of good Christian family, describing the first twenty-odd years of her life in Ealing, the Forest of Dean, and her aunt's orphanage in South London. Absolutely fascinating stuff.

Four salient points - the safety and order of the Edwardian world, the all-pervading influence of Christianity, the still rigid class structure, and (as anyone reading childhood memoirs of the era will recognise) the enormous contrast betwen the tighty regulated and rigidly enforced relationship between adult and child, where any adult's word was law in every sphere, and the freedom/liberty/license of children's relationships with each other. In George Borrow's memoirs he desribes gang warfare and running battles between schoolboys (with however, none of the knife-work you'd get in, say, London today) in the Edinburgh streets. Reading the passage where the village boys torment Frances' Downs syndrome brother, I was reminded of Laurie Lee's gang of Cotswold adolescents plotting to waylay and rape the village idiot - a mentally deficient girl.

(The cultural level of the respectable working class in late Victorian times was remarkable. When our decorators arrive the radio is the first thing to go on. Can't work without it. Once ...

"When we had the local painters and decorators in the house the most beautiful part-singing would re-echo throughout the place all day, as they, the maids, the daily woman and the scullery maid all joined in, each one taking his or her part in perfect harmony." )
Posted by Laban at 1:06 pm 11 comments:
Labels: before the Fall, liberal myths
Newer Posts Older Posts Home
Subscribe to: Posts (Atom)