Some of my favourite bloggers are those I disagree with. Third Avenue is always a pleasure to read, as, surprisingly for an SWP person, is Meaders at Dead Men Left.

Dafydd is a well-read, civilised sort of chap, who thinks you can take away the cultural underpinnings (chiefly liberty and Christianity) from Western society without it crumbling.

Meaders is one of those infuriating types. Like the journalist Nick Davies ('Dark Heart' etc), he can see clearly what's wrong - then jump straight to the wrong conclusion. Social mobility dropping ? Life expectancy decreasing ? Nothing to do with the abolition of grammar schools, cultural factors, a welfare-funded underclass. It's down to the Blairite neo-liberal agenda, apparently.

He's picked up an interesting quote by Lib-Dem Vincent Cable.

It's because of the politics of identity that I can't see the Conservative Party reverting back to the role it had in the Fifties, Sixties and even under Margaret Thatcher as a broad church appealing to people on the middle ground. I cannot see that happening any more. There will have to be realignment.

"I can see a world where there is an authentic party of the nationalist right, an authentic socialist party and several in the centre."

I think he's right about the nationalist party - the question is just which party that will be.

But I see no reason why 'the politics of identity' shouldn't also include a party of the religious Right. Like Respect.
Posted by Laban at 7:16 am 1 comment:

Can this story be real ?

Via the Englishman, news of an arrest for alleged homophobic abuse - of a horse.
Posted by Laban at 6:58 am No comments:

Despite our initial cynicism, the boys and I have been glued to Women's Euro 2005.

If only Yankey could cross as well as she skips past defenders. That Smith can match Keane for a studs-up tackle any day. And the nation's favourite Karen Carney has good feet - her little through pass before her winner on Saturday was a delight.

The Dumb One doesn't seem to share this feeling. To put it mildly.

Plans to ban the manufacture, import and sale of most kinds of replica guns have been outlined by the government.

The measures are included in the Violent Crime Reduction Bill.

The bill proposes an increase in the age limit for buying knives from 16 to 18, and search powers for head teachers who suspect they are being carried.

Binge drinking-related disorder will also be addressed, with proposed plans such as suspending alcohol sales in bars that persistently sell to minors.

The proposals are part of the government's attempts to restore "respect" in communities, town centres, and schools, which it says is among its top priorities.

Knives remain the weapon most commonly used in violent incidents, prompting the minimum age at which they can be bought to be raised from 16 to 18.

This government gets more and more difficult to parody. But we can see another iron law of liberalism in action. When faced with an increase in crime, rather than rigourously enforcing the (in most cases perfectly adequate) existing laws, the government prefers to enact new ones. If they impinge upon the law-abiding ? Omelette, eggs and so on.

They could cut violent crime with exemplary sentences, murder by the death penalty or by making "life" imprisonment, in practice about 12 years, live up to its name.

But no. The government has long since given up trying to reduce the propensity to commit crime. Instead it relies on reducing the opportunity. And we all become a little less free.

I don't want to live in a world where people have the desire to commit crime but not the opportunity (not that I think this hopeless bunch are actually capable of reducing the opportunity. These laws are unlikely to have any practical effect - but if my son wants that blank-firing Walther we'd better get it quickly.). Give me a world of free people. We had that once.
Posted by Laban at 6:00 pm No comments:

again, alas. If you want what Third Avenue calls 'bile-filled rhetoric' - and there's no better sort - then Dumb Jon is your only man. Pub Philosopher is also recommended.

Jon notes the arrest of two police officers in London who shot a man carrying a chair-leg in a bag (they'd been told it was a shotgun). We can all feel safer that such dangerous men are off the streets - particularly when we think that their protesting collegaues may be replaced by Army marksmen.

New group blogs The Sharpener and Once More are up - I'll get them on the sidebar in God's good time.

I've just listened to an hour of the Today programme, which is obsessed (RealAudio) this morning with the Blair/Bush relationship. In the BBC world, it's a bit like George and Lennie in Steinbeck's Of Mice And Men.

George W. Bush is Lennie, simple-minded but physically powerful - Tony Blair is George, his concerned friend who tries to keep Lennie from using his strength wrongly. It all ends badly in the book, but in real life who knows ? Maybe the simple Toxic Texan can be led down the paths of righteousness by our gloriously nuanced, sophisticated leader - Gordon Brown.

And finally - Edinburgh is going to be a riot. It's likely that there'll be enough people on the streets to provide the necessary cover/distraction for the Womble types to be able to trash many a capitalist entity. As David Farrer reports, they are just waking up to this fact in Auld Reekie.


To add fuel to the flames, Geldof has now called for an armada of small boats to carry thousands of illegal immigrants (or Frenchmen - whichever is most offensive) to the UK. The good news is that the world's busiest shipping lanes should see to a fair number of them. It's going to be Slapton Sands all over again. If anyone takes any notice, that is - yachties are (generally) sensible people.

Apologies for light posting. The evenings are also light, and the garage needs a complete reorg. When I've got the Cat 5 cable installed I'll be networked out there ... also a couple of other preoccupations lately.

Our house and garden has always had a lot of wildlife - sometimes too much. Bats live in the loft, jackdaws in one chimney. The tumbledryer vent can't be used until the wrens have all hatched. We didn't block all the scaffolding holes on the (externally completed) extension - now blue tits have taken up residence.

When we found rats in the loft five years back we got a perfect black cat - affectionate, beautifully behaved in the house and a ruthless hunter of all vermin. She had one litter and we kept a boy - a hefty tabby. To watch them hunt as a team was an education, although she would occasionally bring in living victims ('I just saw a rabbit by the bookcase').

She disappeared without trace last November - no body. Fox ? Vivisection lab ? Dunno. Her son, never quite as clever as his mum, was hit by a car in February.

We'd also got hens in the interim. Never any problems with rodents - the cats saw to that. But now they were gone and word went round fast.

At this time of year we wouldn't feed the cats at all. They lived on fresh young rabbit. Now look at our garden. 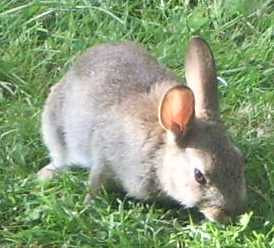 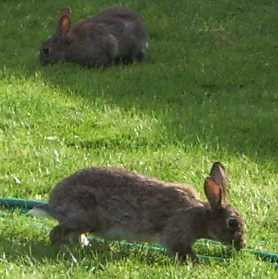 Worse, the hen-run is surrounded by tunnels - dug by rats. When I shut them up at dusk last week I disturbed a big brute - nearly a foot long.

So Thursday night found my eldest son and I lurking by the hen-house, armed with the trusty BSA Meteor .22 and a somewhat underpowered Gat. Sure enough, the rat emerged from the hedge and headed for the house. Missed !

He dived under the hen-house. I moved the house and my son winged him with the Gat - a good shot considering what an inaccurate weapon it is. With hindsight a cricket bat might have been a more sure weapon. I killed it with the .22. Never shot a living creature before, but I'll make an exception for rats. By the following morning the crows and magpies had disposed of it. But he's got mates who tried to eat their way into the hen's food-store (big plastic bin) the other night. I might have to get a better air-pistol for my son.

We now have a new kitten - too small to take on anything yet. Part-Burmese, part something else. Call me a cynic, but I think he looks a bit too chocolate-box to be an effective hunter-killer. We shall see. 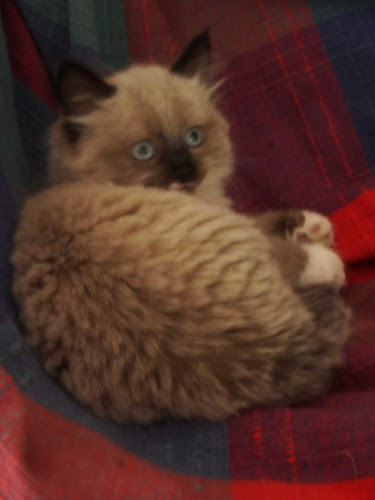 Posted by Laban at 6:26 am No comments:
Newer Posts Older Posts Home
Subscribe to: Posts (Atom)