We Are All Civilised Now

There's a wonderful quote in Peter Hitchens' book The Abolition of Britain about the late Woy Jenkins, architect of what he "rightly preferred to call the civilised society rather than the permissive society", to the effect that "Roy Jenkins was already marshalling his tanks on a five-hundred mile front". With his help, the criminal justice system moved from retribution to understanding (and the crime rate went up 1,000 %), abortion was legalised (200,000 a year - over 6 million since 1967), the death penalty abolished (murders tripled despite huge medical advances in trauma treatment) and homosexuality was legalised (and 11-year olds are now removed from foster-parents who aren't cool about uphill gardening).

We are so much more civilised now :

Miss Lakinski - who suffered a life of bullying - had collapsed on her doorstep as she returned home from visiting a friend. But instead of helping her, Anthony Anderson called her a "smackhead" and a drunk before kicking her feet and emptying a bowl of water on her head.

Teesside Crown Court heard that he then covered her in shaving foam, and urinated on her as a friend filmed the act on a mobile phone.

So far so bad. This is what gets me :

The 27-year-old was watched by a laughing crowd as he carried out a series of humiliating attacks on the 50-year-old in Hartlepool. A court heard today that one of his friends filmed the incident on a mobile phone while one shouted: "This is YouTube material."

There have always been scumbags. There probably always will be, although I find it hard to imagine such an act in any other time before the cultural revolution. What's really telling is that he had an approving audience.

Here's another tale from our civilised land :

A mother who murdered her disabled daughter and killed herself by setting fire to the car they were in had been tormented by youths who mocked her child’s severe learning difficulties.

Fiona Ann Pilkington, 38, had repeatedly told Leicestershire police that a gang of children had embarked on a campaign of terror against her daughter, Francesca Hardwick, 18.

Neighbours told yesterday how children had taunted the disabled woman shouting “disabled bitch” and other obscenities as she stood at her window. On other occasions they would hurl stones and eggs at the windows and bang on the front door of the home Ms Pilkington shared with her daughter and son, Anthony, 16.

The women’s remains were discovered burnt beyond recognition after Ms Pilkington apparently doused the car with petrol and set it alight. It was discovered in a lay-by in Earl Shilton, Leicestershire, on Tuesday night.

Again, tormenting the 'different' is something boys have always done. Here's Frances Roper describing an Edwardian childhood with a Downs syndrome brother :

Poor little Ben was, as usual, the problem. The boys soon realized that he was not normal, and quite unable to take care of himself, and they would shout after him and pelt him with lumps of mud and sometimes stones, if he went down to the village by himself. As soon as Mother found out about this, he was never allowed out alone, and naturally the duty of keeping a constant eye on him devolved upon me. I was sent down to the village every day on some errand or other, and always had to take Ben with me. On one occasion he insisted on dragging a little trolley cart behind him, and this the village boys found irresistible. There was a long stretch of road between the end of the village and. the cluster of cottages round our house, and as soon as we left the village we were surrounded by a crowd of boys. They kept rushing up and dropping stones into Ben’s little cart, till it became so heavy that the poor little fellow could not pull it, and was on the verge of tears. Several times I tipped the stones out and turned indignantly upon our tormentors, but I was only one small girl trying to protect a tiny helpless boy, and my protests only drew forth more jeers and tormenting. Eventually I picked up the little cart and carried it under my arm. Thus foiled of their fun, the boys proceeded to slash my legs with their top-whips, and continued in this pleasant amusement till we were nearly within sight of home. By this time I was trembling all over with fright and fury, though fury certainly predominated, and I dashed in to Mother and showed the crimson wheals all over my legs.

But we're in the Edwardian age, whan all adults had authority over all children.

For once Father and Mother were thoroughly roused. Father asked me if I should be able to recognise the boys, and on my assurance that I should, he clapped on his hat, seized my hand, and we raced off down the hill to the village. The group of boys were playing with their tops, and I pointed them out to Father. Dropping my hand Father burst upon the group with unintelligible howls and yells, whirling his arms round and round like windmills. After one horrified glance the boys shot over a low wall and fled down the adjoining field with Father in hot pursuit. He did not lay hands on any of them though he could easily have done so, contented himself with giving tongue to a series of terrifying snarls and growls without a single spoken word, which struck the most abject terror into the hearts of my tormentors. One of them tripped and fell flat at Father’s feet, and lay there howling, while Father took a flying leap over him in his headlong stampede. I climbed on the wall and bounced up and down clapping and cheering, nearly hysterical with excitement and delight. Having chased his quarry out of sight Father returned, breathless with running and yelling, and completely helpless with laughter ...
That party of boys never again showed any lack of respect to Ben or me, and caps were sheepishly touched whenever we met.

Not so for poor Fiona Ann Pilkington. In our age boys are still boys - with the pack instinct to run down the wounded - only there's nothing you can do - and nothing anyone else will do :

Leicester police said yesterday that they were treating the incident as murder and suicide, adding that detectives would now reinvestigate a series of complaints about antisocial behaviour in the family’s neighbourhood. The Times has learnt that the women’s deaths came only three weeks after the mother last contacted police to complain that her family’s lives were being made a misery.

Ann Jones, who lived opposite Ms Pilkington, said that the single parent had simply “had enough” of being harassed by local youths. “If the police had done their job she would have been here today,” Mrs Jones, 55, said. The family lived in Bardon Road, Barwell, an area, neighbours said, that was plagued with children wreaking havoc on the streets at night. Other neighbours told how the gangs of children would hang around, making the family virtual prisoners.

There's another factor of course - extended adolescence. I imagine poor Ms Pilkington's tormentors were a bit older than Ben's.

There's a sixteen year old boy who's lost a mother and a sister. How in God's name must that child be feeling tonight ?

UPDATE/correction - Francesca's brother is now being looked after by his father.
Posted by Laban at 10:31 pm
Labels: the way we live now, torture in the community

I feel very sorry for his mum and dad, but really -

A graffiti artist described as 'brilliant' was killed by a midnight express train as he daubed a wall next to the tracks on the East Coast main line to London, an inquest heard today (Oct-24). Paul Stevens, the 29-year-old son of a rail worker, was killed at Bethnal Green railway station in East London after being struck head on by the Southend-to-Liverpool Street train. He was daubing the wall on the railway viaduct in Three Colts Lane about midnight on March 20.

Call me old fashioned, but at 29 one really shouldn't be painting other people's property at midnight, having drink taken, while standing on a railway line. But I guess one of the great achievements of the cultural revolution is to have extended adolescence, which used to be pretty much complete by 20, up into the thirties and beyond.
Posted by Laban at 9:54 pm
Labels: the way we live now

Now, Linda's mum, Katie, lives on the ground floor of a council block of flats. Linda will tell you that Katie is the only white person on the floor. "It's not colour - it's that nobody bothers with each other much."

Of course, there are examples of multiracial estates pulling together as one but that's not Linda's experience. Linda also says that while she isn't "allowed" to voice her concerns - what she calls "the other lot" can "get away with liberties" by wielding the weapon of political correctness.

Linda's friend, Angie, gives what she says is a not untypical example. She was trying to park her car - an Asian teenager tried to cut in, when she objected, he called her "a ******* racist". "They do it all the time. I don't want to be seen as a racist so what can I say?"

That no video of the late great Mrs Mills is to be found on Youtube.

She shot to fame during the same period as her stable-mates The Beatles, with whom she shared space at Abbey Road Studios (as mentioned in the Beatles Anthology DVD bonus materials). After previously working as the superintendent of the typing pool in the Paymaster General's office in London in December 1961, she would become a household name by the end of January 1962, having been spotted by a talent scout at a Woodford Golf Club dance near her home in Loughton, Essex.

By the sound she was a major influence on this lot :

"So unlike your parents, you're all clear-headed this morning"

I love the casual assumption that every English adult with an interest in rugby was drunk on Saturday. No wonder most Muslims listen to their own-language stations or watch satellite.

"Are you passionate about what you do ?" - this to some poor 12-year old. For God's sake, woman, you're not interviewing a potential Housing Support Officer at Camden Council. Radio Five seems to have an inexhaustable supply of middle class idiot presenters.
Posted by Laban at 7:29 am
Labels: culture, rugby, the contradictions inherent in the system

"When They Are All Gone"

I was pointing out today that some of the fall in crime like burglary is because there are fewer easy victims, as a more trusting generation, brought up in harder times but with greater 'social cohesion', pass on.

The last generation who were trusting and didn't lock their doors have mostly died, removing one set of easy victims.

Similarly a GP friend who moved from the urban Midlands to the Yorkshire fells says that the "old boys" are really reluctant to bother the doctor - they've got to be really ill before they come in. Different culture.

I've known elderly patients who have fallen over at night, then not pressed the button until gone 8am. They 'didn't want to bother us'.

It's a generation that is getting smaller and not being replaced, this self-sufficiency and the desire not to be a burden on others. The feeling that spending the night on the floor isn't an 'emergency'.

I'll miss them when they are all gone.
Posted by Laban at 11:07 pm
Labels: the way we were 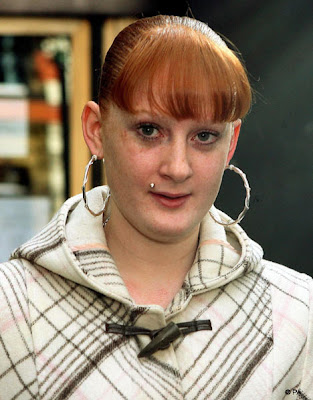