"Who's gonna rule when the government falls ?"

I was just thinking of loading the Ruts' 'Secret Soldiers' to Youtube, and blimey if someone called rustykwak hasn't beaten me to it. 7 views so far ... a doomy variation on 'Won't Get Fooled Again'. But a lot has changed since both these songs were written. Whatever happens, it won't be like this, or that.

Nothing new, but have we learned ?
In early days the spirit burned
To fight the fights of the oppressed
But they were shot down like the rest

So what's it going to be and how long now ?
Who's going to rule when the government falls ?

One Timothy Egan in the NYT :

Beware, they told us in the train stations of northern Italy, of the Gypsy baby trick — an old ruse by Europe’s most reviled underclass. A woman will suddenly ask you to hold her child, and then just as you fumble to respond another Gypsy will grab your wallet.
Watch out, they cautioned us in the lovely Turkish port city of Kusadasi, for the Gypsies who prey on tourists along the waterfront. And old lady will bump you, while a teenage hooligan grabs your bag. The Gypsy old-lady trick.

Those Gypsies, known by the less pejorative term of Roma, are getting kicked around the continent again, hardy perennials of European scapegoats. Unspoken characterizations based on ancient stereotypes — they are shiftless, clannish, prone to petty thievery and to begging, prostitution and dark motives — are now out in the open.

Funnily enough, I was given a similar warning in Malaga some twenty years back - 'watch out for the gypsy flower-sellers' said the girl at the hotel desk. Now Laban pictured someone sitting in front of large flower-baskets in the style of the late Buster Edwards at Waterloo, and wasn't too worried.

About to cross a road - a lady of maybe sixty blocks the way, thrusting a carnation at me and smiling. A younger woman with her.

(Rapid calculation - about 0.5p. Much too cheap to be kosher)

Would you believe, she wouldn't take no for an answer, stepped up to me and started pinning it. I leapt backwards about a yard. Which pulled her left hand (empty) out of my right-hand rear trouser pocket. Impressive - my eye had been on the hand with the carnation, had not had a clue.

I spoke to them both in English then. They seemed to understand and went away.
Posted by Laban at 9:42 pm 16 comments:
Labels: Spain, white liberals

Ross on the Scottish Commonwealth Games team and their doubts about their Delhi accommodation :

"if a country that contains Dundee thinks it might be verging on the unlivable, then we should take their word for it"

Posted by Laban at 9:18 pm No comments:
Labels: Scotland

From The Moral High Ground ...

“Why do media orgs report ethnicity of terrorist suspects?”

Not a clue, Sunny, not a clue.

Why don’t you ask the guy who wrote “Another White Terrorist Against ‘Non-British’ Caught”? 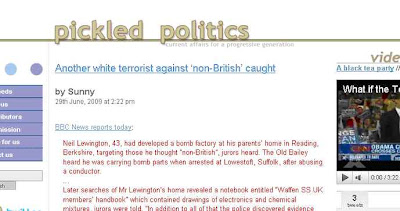 UPDATE - I did point out his inconsistencies a fair while back :

I'll pass over the fact that he seems to be pre-empting the verdict. You could just imagine how Sunny would react if the Mail and Sun started producing 'Another Asian terrorist' headlines every time a wannabe jihadi got banged up - which a year or so back was about every other week. He'd have a fit.

For what it's worth I imagine the occasional 'of Somali/Algerian/whatever origin' that I hear on the news is a little Community Cohesion comfort blanket - a quiet way of pointing out that whoever-it-is is not a second generation Brit who captains the local cricket XI and helps out at the primary school.
Posted by Laban at 7:01 pm 2 comments:
Labels: don't do as I do - do as I say, UK politics

He, for one, welcomes our new overlords

In the last year or so born-again Labour man Andy Newman's Socialist Unity blog has started to constantly beat the drum for soi-disant Communist China. I whacked a comment on his latest breathless report, but the spam filter nailed it, so here it is.

Andy - why the constant worship of our new Chinese overlords? The socialism of China has a highly nationalistic and patriotic flavour - one that you would hate and fear were a UK party to be offering it.

As a born-again cultural conservative I can appreciate what China's doing - looking after #1 while useful idiots all over the world embrace globalisation. As the new manufacturing powerhouse, they'll naturally be in favour of free trade and open markets - for others. The US firms which rushed into China, swooning over the size of the market ('if we only had 3% that could be x million customers'), are discovering that the Chinese have no intention of allowing roundeyes major influence.

Meanwhile military spending increases and the sabres are rattling in the South China Sea, while China is buying up as many resources in Asia and Africa (ores, coal, oil) as it can and developing strongly in future green technologies, especially solar generation.

They're driven by Chinese national interest, something I can completely understand. But Andy - and, to be fair, pretty much all the UK left - openly hate the concept of British national interest. What have they got that we haven't, Andy?

"a white British candidate in preference to a Bengali"

Imagine that the Tories have dropped a candidate in, say, Cirencester, for being a bit too nationalistic (i.e. having links to dubious right organisations), after a Guardian-led campaign against him exposed said links. The Tory #2 is an Asian solicitor and a very competent chap, but he’s dropped for a little-known white candidate.

Tory bloggers bemoan the enforced change, but point out that "they could not go to the person who came second in the poll, without it looking like they were choosing an Asian in preference to a white British candidate".

I wonder what the born-again Labour Party members at Socialist Unity would make of that ?

"Once the Labour Party NEC decided to suspend Rahman as candidate, in the face of Gilligan’s Islamophobic witchhunt, then they could not go to the person who came second in the poll for the Labour Party candidate selection, John Biggs, without it looking like they were choosing a white British candidate in preference to a Bengali. So they have ended up imposing the unloved Helal Abbas, who has little support. "

By putting John Biggs second in the poll, Labour activists of all ethnicities were indeed choosing him in preference to Abbas, who came third - on grounds presumably of proven ability (former council leader) and voter recognition. That was apparently OK as long as he was second - it was just putting a white British candidate first in Tower Hamlets that was unacceptable.

I can appreciate the realpolitik of it - and a Majority Rights type would doubtless say that the voters of Tower Hamlets would be rationally voting for their ethnic interests - but I say - and see - leftist hypocrisy - what we're seeing in Tower Hamlets is the sort of thing that white voters simply aren't allowed to do without having the BBC and Guardian on their backs until they cry 'Capivi!'.

It's also an interesting insight into the voters of Tower Hamlets - presumably the local Labour Party know and accept what their constituents would feel about a white candidate.

We seem to be further than ever away from a time when John Biggs can be judged not on the colour of his skin, but on the content of his character.
Posted by Laban at 10:07 pm 4 comments:
Labels: UK politics, white liberals

Yet another Swedish story that rings a bell in the UK.

A register of over 5,000 people who are either members or have registered their interest in the anti-immigrant Sweden Democrats (SD), has been published on the internet.

In the Guardian, of all places, I read this by Andrew Brown:

"... people here believed Sweden was the best country in the world because it was the most internationalist. This led to a fantastically generous policy on asylum and integration. Nearly a third of Sweden's population today are either immigrants or the children of immigrants. There are more Iranians living in Sweden than there are Danes. In 2007, one small town outside Stockholm took in more Iraqi refugees than the whole of the US. Professor Jan Ekberg at Linné University has calculated that unemployment among immigrants means the excess cost of their welfare payments over the tax they pay is at least as high as the defence budget, and possibly 50% higher. "

Hmm. Sounds a vaguely familiar scenario, although I don't know where Andrew Brown's getting those population stats from. A/c/t Wikipedia :

As of 2008, 18% of the population had foreign origins (13% if excluding Finns and 9% if also excluding other Scandinavians), with 14% foreign-born and another 4% born in Sweden of two foreign-born parents.

And while I can't find the relevant info on the Swedish stats site, 44,000 immigrants pa in a population one-seventh of the UKs makes for a pretty high immigrant number, but probably not (yet) 33%. Like the UK and Spain, the birth-rate has been increasing following decades of decline - what on earth could be responsible for that ?

The BBC, in its report on 'far-right' (i.e. anti-mass immigration) election gains, puts the immigrant percentage at 14%. Back to the Guardian. Apparently the far-righters have new policies and new image - sound familiar ?

He moved the party away from Nazism and some forms of racism, but they were still pariahs. "No one would vote for them because they were seen as fascist yokels," says Niklas Orrenius, a journalist who has studied the movement for years. To be a known member was to risk sacking from any kind of job. Far-left activists beat them up, on one occasion breaking into a party gathering with iron bars. Last Friday two masked men attacked David von Arnold, a party candidate in Malmö, outside his flat and carved a swastika into his forehead. The respectable media largely ignored this as it ignores the party as a whole.

That sort of thing sounds familiar, too.

Andrew Brown is I think the Guardian's religious affairs correspondent. There's definitely one religion he subscribes to :

If you believe the international rightwing press, the answer is simple, and has been since 2004, when Fox News made a special report on the subject: Sweden, and especially Malmö, has become a laboratory for the creeping Islamisation of Europe. The most common child's name there is now Muhammad; police dare not go into immigrant districts, where only sharia law is respected; and soon all the Jews will be driven from the city. All this, flecked with varying amounts of spittle, is recounted as fact on the net and in US papers.

So Andrew gives us the evil rightie worldview - what's his actualite ?

A 2008 government report (on the massive Rosengard estate), which drew entirely on the experiences of teachers, police and social workers, described a place where Islamic orthodoxy was enforced by young thugs; women were forced to wear headscarves and children segregated in religious free schools. There was a small riot after one of the 20 or 30 unofficial mosques in cellars was closed when its lease was not renewed, and nastier riots when the Israeli tennis team played a Davis Cup match in the city last summer.

I like Mr Brown's methods of refudiating those right-wing, spittle-flecked slurs, with his "33% immigrants" figure and his 'young Islamic thugs' - you can read the article to see his refudiation of rape statistics. But with friends like Andrew Brown, who needs enemies ?
Posted by Laban at 8:08 pm
Labels: immigration, UK politics, white liberals
Newer Posts Older Posts Home
Subscribe to: Posts (Atom)