Don't These Reactors Have Control Rods ?

Apparently the Japanese reactors are BWR reactors, where the control rods have to be inserted into the reactor from beneath rather than dropped in from the top. Wiki :

In most reactor designs, as a safety measure, control rods are attached to the lifting machinery by electromagnets, rather than direct mechanical linkage. This means that automatically in the event of power failure, or if manually invoked due to failure of the lifting machinery, the control rods will fall, under gravity, fully into the pile to stop the reaction. A notable exception to this fail-safe mode of operation is the BWR which requires the hydraulical insertion of control rods in the event of an emergency shut-down, using water from a special tank that is under high nitrogen pressure.

Did the earthquake damage the insertion mechanism or rupture the nitrogen pressure tank ? Or is it that even after full insertion of the control rods the beast needs continuous cooling ?

Anyone know ? Call me naive, but I assumed in the event of trouble you dropped the rods in (or in this case shoved them up) and that was that.

UPDATE - "is it that even after full insertion of the control rods the beast needs continuous cooling ?" is indeed the answer. As laid out in the post above, there's still residual heat - because nuclear reaction products are in the fuel. These typically have short half-lives, which means they give off a lot of heat as they (quickly) decay - but not quickly enough in the absence of cooling water flow.

The estimated death-toll seems to be rising rapidly. The images of the water rolling towards people and vehicles looked very nasty, and gave the impression of potential casualties in the thousands or tens of thousands. I've not been able to gather from the news how much time the people of Sendai and the north-east coast had to flee in between the earthquake and the tsunami.

Social solidarity seems to have been magnificent. I heard a TV report that supermarkets were cutting food prices, and couldn't but wonder if in similar case they'd be raised over here. I bet there's either none or very little looting. In the July 2007 UK floods, not only were many abandoned cars broken into, but when free packs of bottled water were left on the pavement for those who needed it there were reports of people loading hundreds of bottles into vans - presumably to sell.
Posted by Laban at 2:11 pm 19 comments:
Labels: Japan

If, as looks increasingly likely, Gaddafi wins the civil war in Libya, then the grovelling of the previous Blair/Brown administration will all have been wasted. I would tend to assume that BP's Libyan assets will be a a write-off - after all that sucking up, after the Megrahi release, after sending the SAS to train the Libyan army.

"Men avenge slight injuries, but not grave ones"

The above analysis is based on the fact that Cameron's anti-Gaddafi moves (freezing assets, stopping arms sales, verbal condemnation) were all carried out in those days a few weeks back when bien-pensant opinion was that Gaddafi was doomed. Therefore he was jumping the gun, it's another Cameronian cock-up by a man better at posturing than governing, and BP and BAE (along with innumerable Libyans) will pay the price. Not only that, but he's sold off Ark Royal and scrapped the Harriers. If we did want to play rough with him, we haven't many options beyond a strongly worded diplomatic note other than a thermonuclear strike, a possibility which I think we can thankfully ignore.

But ho ! What is this ? By financial blogger John Hempton, a man with penetrating analysis when it comes to following the money. Total is the French oil company with close links to the French state.

"...it comes as a big surprise to see Total (ahem the French Government) recognizing the Libyan rebels as a legitimate nation and exchanging ambassadors. France does not sell arms to rebels or terrorists. Recognition of the rebels as a nation is a basis for supplying them weapons. France has gone further and is the major proponent of a no-fly zone. It has also advocated bombing Libya.

Given the very substantial French oil interests in Libya it is absurd to think that Sarkozy (first and foremost a French Nationalist) did this without either the tacit acceptance of Total or without Total's interests in mind. France is not keen to go to war (even with jets and no casualties) in support of American oil companies. They think differently about their own oil companies."

And, as Mr Hempton points out, British policy is not so far away from French.

Now he's making me think again. Could it be that Cameron and Sarkozy have a cunning plan ? It would run contrary to Cameron's current performance, but the past is not necessarily a guide to the future and I suppose it's just theoretically possible. I'd like it to be true, but I think I'm entering into the realms of fantasy, as Captain Mainwaring would say. I think Mr Hempton and I differ on what a "French nationalist" might look like, too - I'm not at all sure Sarko falls into that category.

UPDATE - if it's a cunning plan, it doesn't seem to have persuaded any of "our European allies".

Cameron tried and failed to have an explicit reference to no-fly zones and Nato in the summit statement... Merkel said Germany would not become "a party to a civil war in North Africa" and refused the British wording.

The disputes also involved the French president, who sounded defensive afterwards. Sarkozy's decision on Thursday to recognise the rebel leadership unilaterally was especially contentious, heavily criticised by east Europeans and by Merkel.

I suppose Sarkozy could always go it alone, arming the rebels and taking out a lot of Gaddafi's hardware. France probably has the military muscle. It would look somewhat obviously like an oil grab, though - and what of the currently out-of-the-news banlieus ? World opinion wouldn't like it either, though I'd discount Merkel's protests. After all, what can she do - invade Belgium ?
Posted by Laban at 6:18 pm 10 comments:
Labels: Africa, UK politics

Useful Reuters breakdown of the tribes of Libya.
Posted by Laban at 9:03 am No comments:
Labels: Africa

Only a month ago it was all going so well.

I am watching wonderful and optimistic scenes on television of brave and cheering Egyptians in Tahrir Square. Eighteen days that shook the world where ordinary Egyptians faced down oppression and now Mubarak has GONE….. scuttled off to Sharm el-Sheikh. The Egyptian people have come so far and are an example for us all! Never give up!!

It marks the arrival onto the stage of history of the Arab masses as an actor rather than the passive and infantilised observers they had been for generations. The stranglehold of dictatorship has been broken from below. The Arab world shall never be the same.

I am writing this Sunday morning, February 6. For 12 days and nights now, millions of Egyptian women and men, Muslims and Christians, people of all ideologies and beliefs–the Egyptian people—have continued to unite under the banner of spontaneous popular revolution.

What particularly chuffed lefties over here was the apparent anti-Mubarak unity between Muslim and Christian, as well as the women protesters on the streets of Cairo.

The first little unpleasantness - the attack on CBS reporter Lara Logan in Tahrir Square on the evening of Mubarak's resignation. Then last Friday a Coptic Christian church was burned down after rioting over "a romantic relationship between a Christian man and a Muslim woman" - and local Muslims held prayers on the burned-out site.

The mob allegedly prevented the local fire brigade from entering the village. The priest of the small parish, and three deacons have been reported missing.

“Some of the Muslim mobs in the area took the land … and put a sign that it’s now a mosque,” Michael Meunier, President of the U.S. Copts Association, told Vatican Radio on March 8.

Christians protested at the attack in Cairo yesterday - and fighting broke out with Muslims in which 11 have died.

Meanwhile, in the centre of Cairo, at Tahrir Square they were celebrating International Women's Day.

More than 200 men charged on the women – forcing some to the ground, dragging others out of the crowd, groping and sexually harassing them as police and military figures stood by and failed to act.

Now one mustn't get too downhearted, early days yet and all that. But although Mubarak is gone and Cairo is off the front (and inside) pages, I don't get the impression that the power structures in Egypt have changed dramatically. The Army and police, secret and not so secret, haven't gone away AFAIK. And most importantly, I don't see anything telling me that the discontents so bravely voiced on the Cairo streets are likely to be satisfied soon. Young Egyptians remain over-educated and under-employed, a situation we're likely to see in the UK soon. I'm not sure that Mubarak's solution - "tight control, and tell them Israel is to blame for everything" will necessarily fly here, although it did well over 30 years for Mubarak.

It all feels a bit April 1917-ish from here. What rough beast or beasts (one is already resident) are yet to slouch their way to the Land of the Pharaohs ?
Posted by Laban at 7:50 pm 10 comments:
Labels: Africa, UK politics 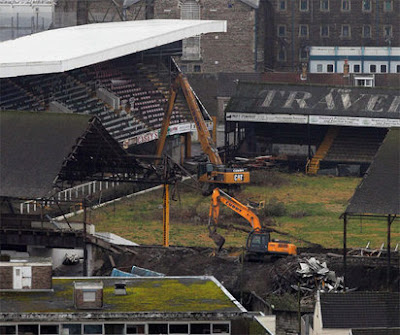 Left, the monstrous East Stand, an Eighties addition to a previously open terrace which ruined the view of the pitch from the landings of Swansea Prison, seen in background. Front, a gaping void in the North Bank, the large terrace which could hold 10,000-plus fans in pre-Taylor Report days.

They're finally demolishing the Vetch Field, former home of Swansea Town, which has been standing empty for six years. The turf trodden by Ivor and Len Allchurch, John and Mel Charles, Terry Medwin, Cliff Jones (not to mention Dave Gwyther and Tony Millington), will become a 'landscaped area'.

There's something awfully sad about an abandoned football ground. I felt the same about Park Avenue, which for years remained empty in Bradford 7, the posts gone and the grass growing a yard high. 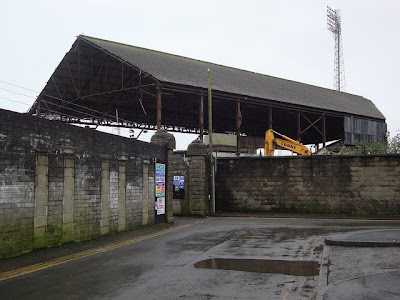 The sporting landscape of a Swansea childhood is vanishing - at neighbouring St Helen's, the disappearance of the Mound Stand destroyed one of cricket's great pleasures - the ability to watch the sea and the shipping between deliveries. Then the old East Stand, recipient of a couple of Gary Sobers' six sixes, was demolished and replaced by what looks like an aluminium bus shelter. The stand overhung the Mumbles Road and was supported by pillars on the pavement, giving a cloister effect and shelter from rain. During the early Sixties wave of Welsh nationalism, the letters F R E E W A L E S ! were painted on the pillars. Within weeks some wag had painted out the W, and the pillars advertised free ales until demolition.
Posted by Laban at 8:45 pm 1 comment:
Labels: cricket, football, history, rugby, the way we were, wales
Newer Posts Older Posts Home
Subscribe to: Posts (Atom)