This was on Google News (UK) headlines at lunchtime, and it's still there now. I guess they might want to think about tweaking the algorithm which picks the stories. You never know, there might be an element of bias in that report ... 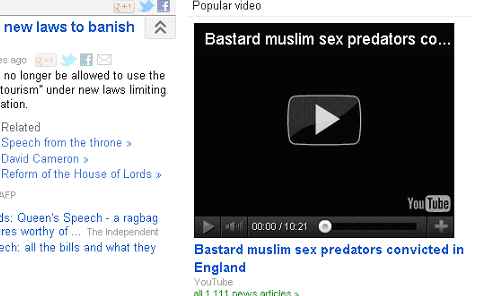 On Murdering People Whose Politics You Disagree With

Listening to radio news coverage of the Breivik trial a few weeks back, I was reminded of a couple of comment threads that struck me more than a year ago, as I idly browsed lefty London blog Bob From Brockley.


The first was on the subject of comment threads, moderation thereof, and how much is too much.

"I've been searching my soul about the point of blogging, anonymous blogging, comments policies and such things."

Now that's something any blogger can relate to. I won't go into details, but no one likes offensive stuff in the comments. Of course, it may be that one man's truth is another man's offence, and on some occasions the truth can be offensive...

Anyway, a reasoned set of comments. I note that nice American lecturer Sarah AB (of "If People Wouldn't Notice Things We Wouldn't Have To Hide Them" fame) popping up.


Then I read this post - the tale, how authentic I know not, of a concentration camp survivor who on release as a teenager not only stabbed the son of the camp guard who'd killed his family, but made it his business to hunt down the guard, deserting from the Israeli Navy in the early 50s to join the Foreign Legion, where the villain had enlisted - and where he met his just deserts.

I was pleased to see that the general feeling in the comments was against stabbing children because of what their fathers did (as I occasionally point out, "the sins of the fathers are visited upon the children" is a description of what happens, and a warning to fathers of the consequences of their sin, not a prescription for action).

But also in the comments, from one "Waterloo Sunset"* :

"**** the "rule of law". Fascists deserve killing, the only questions surrounding that are tactical ones, hence the lack of dead fascists in the UK."

With one bound we moved from the morality of killing someone who has slaughtered your entire family, to a general principle that "fascists" should be killed.  I hadn't noticed that the UK had a fascist or Nazi party, so you have to assume he's talking about members of the BNP.

Does Bob, who searches his soul about comment policies, recoil in horror at this homicidal commenter and reach for the delete key ? The strange thing is, two comments posted after the homicidal one have been deleted, so it's not as if he's not reading his threads.

Another commenter tries to tease out the nuances in the approach to killing "fascists".

So Waterloo, does it make a difference to you if the fascists have/had power, or is simply holding fascist beliefs enough for you to condone their execution?

Our potential mass killer (I've no idea what current membership is, but the BNP used to have ten thousand-odd members IIRC) responds :

It depends on whether you're talking about morals or tactics. (Although I'd see this as more about fascist activists, as opposed to those who merely hold fascist views without acting on them).

Morally, no, I don't have an issue with it either way. The violence we see from fascists now pales in comparison compared to how they'd be in power. So I don't think the argument that any direct action against fascists needs to be either a) strict self-defense or b) in retaliation for a specific act by an individual fascist holds any water. In fact, that strikes me as a really bad idea. Why wait until after fascists are in power to stop them? Fascism doesn't start with concentration camps. That's where it ends.

Tactically I think a policy of targeted assassinations would be very unwise, certainly in the context of Western Europe. I'd shed no tears if Griffin got killed, but I don't think it would do any real good overall. There's several reasons for that. To 'step it up' in that way would obviously lead to massive ramifications from the state and I don't think there's enough benefit to justify that. The political climate isn't right for this kind of 'propaganda by the deed' and is unlikely to be unless we do actually have a fascist movement on the verge of gaining power. It's a distraction from the more serious issue about taking back the streets (EDL) and the war for hearts and minds (BNP)....

Bob removes a follow-up comment, presumably negative. That nice Sarah AB gamely sticks to the subject, trying to ignore the rapidly spreading pool of virtual blood. The guy who wasn't too sure about such tactics still isn't convinced, and our killer gives chapter and verse on why he's hopelessly naive and exactly why we must kill the "fascists" before they do anything bad. After all, by the time they're actually doing bad things, it'll be too late, won't it ?

And at last Bob descends to the fray. Whatever soul searching he's done, I'm not sure I like what he's found therein  :

On the substantive issues, I kind of think that we need to approach this question on something like 4 different levels: moral, political, strategic, tactical. Morally, I respect pure pacifists, but I can't go along with them, and it is certainly the case that certain forms of fascism straightforwardly pass any sensible moral test in terms of deserving stopping physically.

On a political level ...

and so on. And on. And on. Back and forth between the two, with the occasional interjection from that nice Sarah, gamely hanging on in there, not liking at all this talk of killing and maiming people - but then they are fascists, aren't they ?

I find some of the comments here a bit startling (though I'm not completely unsympathetic).

And on, and on, back and forth. While I think we can say that Bob isn't actually, at this moment, in favour of murdering BNP members and activists, his disinclination to grab a Kalashnikov and start shooting is hedged around with so many qualifications and reservations that, were he a hideous rightie, you'd decide that perhaps you'd rather not be linking or commenting there. Talk about "terms and conditions apply" !

a) you can see where a UK Breivik could get ideas from, were Brits to go in for that kind of thing, which thankfully they don't. Once you kick into play the idea that the other side, whoever they be, are going to kill you if they can, so you'd better kill them first ...it's self-defence, innit ? Which is exactly what Breivik is pleading IIRC.

b) the idea that the BNP, English Democrats, UKIP or any other of the anti-immigration, anti-EU parties can in any sense be compared with the Nazi Party, amounts to a disgusting libel on the British people. The kind of vileness in that comment thread is an affront to the peaceful tradition of British, and especially English, political history since the Civil War. I won't go into all the history now, but the various unpleasantnesses and crimes of the Nazis, from anti-semitism to genocide and aggressive war, were all present in German history and politics before Corporal Hitler ever stepped into a Munich beer-hall. (And of course the "left" in the form of the Soviet Union, didn't manage too badly on the anti-semitism and genocide front itself). For good historical and geographical reasons, we have long been the only virgin in a continent of rape victims. Brits don't do fascism - that's a European political tradition - and we do well always and everywhere to avoid European political traditions.


c) Sarah's comments are instructive - in that they show in microcosm how an essentially decent person can, despite their (good) instincts, draw toward accommodation with evil - when the evil comes from those you've come to think of as good, and they tell you that bad things have to be done to other, worse people, in order to protect you. I think there's a lesson there for all of us - and thankfully, this time it's not a history lesson.


* defiling Ray Davies' classic as well as being a potential mass murderer. I'm not sure which is worse.

(comments are off, alas for the usual reasons)

Posted by Laban at 1:03 am
Labels: don't do as I do - do as I say
Newer Posts Older Posts Home
Subscribe to: Posts (Atom)