DHAKA — Garment manufacturers in Bangladesh said they would reopen all factories closed Tuesday in the country's major industrial hub after authorities pledged to protect key plants from protests. Tens of thousands of Bangladeshi garment workers, employees at some 700 factories that supply top names in Western retail, have been on strike since Saturday, demanding higher pay and forcing the closure some 700 factories.

The Bangladesh Garment Manufacturers and Exporters Association (BGMEA), which represents factory owners, said the factories would be reopened Wednesday following a government pledge to put down the protests.

The decision marked a dramatic about face by factory owners, who earlier Tuesday declared that all factories in the affected area, Ashulia, which make clothing for global retailers like Wal-Mart, Tesco, H & M and Carrefour, would be closed indefinitely.

About 800,000 workers are employed in the 700 factories in the area and "tens of thousands" have taken their grievances to the streets, forcing the shuttering of businesses, Dhaka's deputy police chief Monowar Hosain told AFP.

"We've stepped up security, brought in reinforcements but the problem is there are too many protesting workers," Hosain said. The workers are demanding wages of at least 5,000 taka (70 dollars) per month. The current minimum wage, set in 2006, is just 25 dollars.

70 dollars a month would definitely be an improvement, and would hasten the day when the average wage in Bangladesh becomes comparable with that in the UK - and we can make a few things again. Mind, the skills will have been long lost. But maybe they'll outsource some of the less skilled stuff to us.


Posted by Laban at 6:47 pm 13 comments:
Labels: we're not making anything

not to mention de-Christianised Britain.

In a Mail piece about an Islamic private school, a staff member says :

‘Our Koran teaches us to respect the earlier prophets and the earlier revelations of the Bible and Torah,’ he told me. ‘If you do not believe in Jesus or Moses, you cannot be a true Muslim.’

To which a commenter responds :

Yes, you may believe in Jesus, but if your faith is merely in Him as a prophet, your faith is totally in vain. Only His shed blood can possibly wash away our sins. All other vehicles of faith are human vanity.
A proud Pakistani.

Now you may wonder if it's a wind-up, but the theology seems pretty sound to me.

Comment rating : -706. Did they see "proud Pakistani" and turn brain off ?
Posted by Laban at 9:24 pm 5 comments:
Labels: best-educated generation in history, the way we live now, UK politics

Strike One For The Old School

I mentioned a while back that the old school had produced few famous alumni. Nae mair. The new Poet Laureate, no less ? OK, a bit less. Oxford Professor of Poetry,then.

Hill was born in Bromsgrove, Worcestershire, in 1932. "If you stood at the top of the field opposite our house," he once recalled, "you looked right across the Severn Valley to the Clee Hills and the Welsh hills very faint and far off behind them." At the age of eight, he witnessed the Nazi bombing which destroyed Coventry. Hill's work is marked by memories of the war, and contemplations of European history. His father and grandfather were village policemen. Hill identifies himself as working-class - indeed is "glad and proud to have been born into the English working class". He commemorated his maternal grandmother, who had spent her life making nails, in poem XXV of Mercian Hymns : "I speak this in memory of my grandmother, whose childhood and prime womanhood were spent in the nailer's darg [a day's work]... It is one thing to celebrate the 'quick forge', another to cradle a face hare-lipped by the searing wire." Hill was educated at Bromsgrove High School. Despite deafness in his right ear from the age of 11 because of severe mastoiditis, he was an excellent student, and although "somewhat apart", in the words of Norman Rea, a contemporary, he played soccer, acted in school plays, and became a prefect. One of his roles was to introduce a piece of classical music in morning assembly, which, Rea recalled years later, was a task he performed "with enjoyment and aplomb".

They still had the classical music before assembly when I was there, more then twenty years later. But by then the school had moved to the new concrete and glass structure off Alcester Road (Stratford Road to you young 'uns), and the old High School of Hibbins, Sailman et al was Parkside Secondary Modern. But as any educator will tell you, you can't teach children in old-fashioned buildings, and Geoffrey Hill's alma mater now lies derelict. 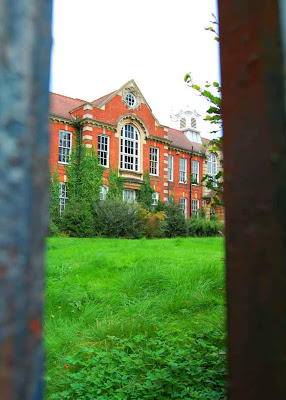 
Is it just me, or does the witch Baba Yaga in this Russian short bear a resemblance to Deputy Dawg ?