"It was a bad wheat harvest in the West (although I'm told East Anglia did better then usual - they reckon they don't normally get enough rain there) but it'll be worse in 2013. None of the fields have been sown round my way - can't get tractors on the fields. Usually by now wheat would be sprouting.

Dairy and beef farmers have had to keep their beasts indoors since October and it's costing them a fortune in feed.

Food's going to be more expensive."


"The price of basic food items could rise by as much as five per cent this year because of miserable weather last autumn, the managing director of Waitrose has warned. Mark Price said food price inflation is already hovering at three to three and a half per cent, but this is just "the tip of the iceberg" and prices could increase even more dramatically over the coming months.

Produce such as bread and vegetables will become up to five per cent more expensive because of poor crop yields leading to a shortage of supply, he warned.

Many farmers are reporting that they still have not planted crops for 2013 because of the torrential rainfall which caused flooding across parts of Britain late last year. "

Posted by Laban at 9:55 am 12 comments:
Labels: the end of the journey, UK politics

Thanks to blogger BenSix in the comments for this, from libertarian economist Bryan Caplan. 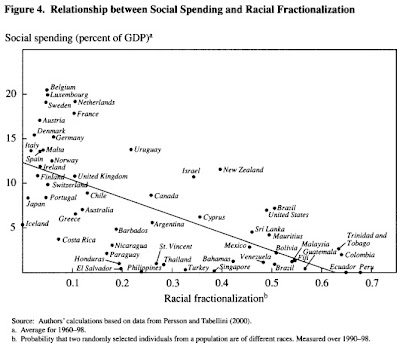 (Graphs from Alesina, Glaeser, and Sacerdote's "Why Doesn't the United States Have a European-Style Welfare State?") 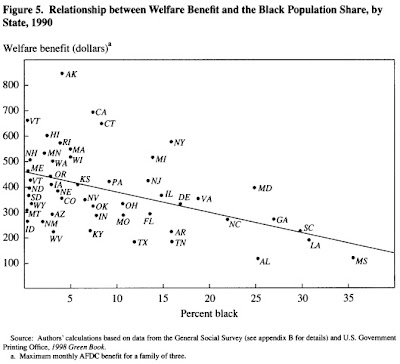 Caplan thinks that the end of the journey is not only possible, but desirable. Key paragraphs :


"Diversity undermines solidarity. People don't mind paying high taxes to support people "like them." But free money for "the other" leads to resentment and political pushback.


That's exactly what we're seeing in the UK, and why Osborne and Shapps may get away politically with a real-terms benefits cut. They noted the outrage among working people in 2011 when benefits rose by 5% at a time of static wages.

Caveat - the first graph is based on 1990-1998 figures, the second on 1998 figures. Ireland and the UK, for example, are considerably more diverse than they were then. And the US is a lot more Hispanic than it was in 1998.

" In particular, let me stress once again that even if open borders makes the majority population more anti-government, after a while their preferences will not matter, since they will inevitably become a minority of voters. "

But at some stage the money runs out, no matter what the voters want.

Can't say we've not been warned.

Posted by Laban at 9:37 am 12 comments:
Labels: globalisation in one country, immigration, the end of the journey

When I wrote about the Universal Credit rules for the self-employed, which will do such damage to the self-employed handyman or the single mum selling her crafts at local fairs, I forgot about another target - the Big Issue Benefits Loophole :

"A Big Issue seller is claiming victory in a landmark case to have her work classed as a proper job and thus be eligible for extra benefits.

Romanian Firuta Vasile was refused housing benefit because a local authority judged that her job selling the magazine "didn't count".

But she has successfully argued that because she bought the Big Issues and sold them at her own profit or loss she was self-employed.

Speaking through an interpreter, Vasile, 27, said she came to the UK in 2007 to look for a job, but could only find work selling the Big Issue."


Romanians and Bulgarians aren't allowed to work here unless they're self-employed. And you'll have noticed the terrible shortage of Big Issue sellers which is crippling British industry. But it sounds as if the Big Issue is their flexible friend :

"The Big Issue exists to offer homeless people and those at risk of homelessness the opportunity to work and earn an income. This is offered irrespective of a person’s background or origin. Earning their own money reduces dependency on hand-outs from the state, charities and the public.. "

Even when the entire raison-d'etre of "earning their own money" is to get "hand-outs from the state" ? It's not surprising that Roma Big Issue sellers are an increasingly common sight.

The good news is that, come October, all this will stop and our self-employed sellers will be assumed to have an income of around £250 pw - whether they have or not.

The bad news is that, come December, the entire populations of Romania and Bulgaria will be free to move to the UK, self-employed or not.

I do wonder if the aim of our rulers is actually to push immigration to the levels where the Brits will, of their own volition, call for the end of the Welfare State. Maybe that Grant Shapps isn't as stupid as he sounds, only as unpleasant as he sounds.

"I do think that it’s right for the taxpayer at large, who after going out, working hard, paying their taxes, should feel that they’re not having to pay for people who are in receipt of benefits to get a higher effective pay rise than the people actually working. So I think this is an argument about fairness."

As I've said before, benefits are meant to afford a minimum standard of living. Raising them by 1% a year for three years, when inflation on necessities is probably over 5%, will drop them a long way below that standard. Now maybe that standard was set too high. But that's not what he's arguing. He's arguing that it's "fair" that a minimum standard set by Parliament should be reduced because other, better-off people are tightening their belts.

I said he's not stupid. People working and still struggling to pay the electric bill aren't going to be overly sympathetic, to put it mildly. Good politics if lousy humanity.