.. and goes to hell. "I'm short of space", says Satan, "I'll have to let someone go who wasn't quite as bad as you. Tell you what, I'll give you a choice - I'll show you a few people and you can decide whose place you'll take".

Satan opens a door. In it is a deep pool and former President Richard Nixon, doomed to endlessly dive in, climb out, and dive in again.

"Who else is there ?" says GWB, "I don't want to do that all day long". Another door and inside is Tony Blair, breaking rocks non-stop.

"My shoulder might not stand that - anyone else ?". Another door, and inside is Bill Clinton, lying on a couch, with Monica Lewinsky attending to him in her inimitable fashion.


"I can handle that" says George.


Thanks to Timmyhawk for the joke. Get that template sorted, Timmy ! 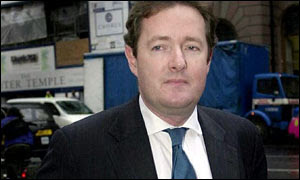 Name : Piers Morgan
Redeeming Features : None whatsoever
Appearance : large amount of egg on face. Appears to have been recently pelted with ordure.
Charge : Deliberately endangering British lives to further the Mirror's political agenda and/or to raise circulation. Damaging the national interest for the same reasons. Killing Bambi. Anything else I can think of.
Pleaded : Not guilty
Verdict : Guilty
Sentence : To be determined. Perhaps when the first deaths occur he can break the news to the widows.


Of course the real price will not be paid by this wealthy, privileged individual, but by some other poor mother's son or sons. There are people alive now who are going to die because of what he has done.
Former QLR Colonel David Black got it about right :
It's time that the ego of one editor was measured against the life of a soldier.
Posted by Laban at 7:44 pm No comments:

What windows they open up on the world. Admittedly somewhat bleary and obscured windows, but I think the translation adds a pleasant element of 'ambiguamente'. The general drift is at least clear.

"Still half lost I looked at around and vi my next wife to the car under the willow and in the distance hindered the vision of its feição, but it perceived that it already had passed for it and he approaches it. I gave attention to its lamúrios and invited it to seat it in varanda of the house where we were. Its firm intention was to follow for the city and looked a transport, said that its father was violent, that he always surrava it that was inebriated and that, as he was drunk, certainly would go to apanhar. I tried to calm it and to convince it that having a bad family he was very worse of the one than not to have family, I tried to clarify that a boy of 8 years would not have possibilities in the city and that could expôr it enormous risks in the hands of pilantras of plantão. Nothing it functioned therefore perceived that all that one my speech was to say that I wanted that it I came back toward house where more early or later he would come back to the routine of the beatings."

Those Daily Mirror Photos - The Truth

Piers Morgan 'fesses up in this UK Commentators exclusive.

UPDATE - Inspired by this story. I love the way that cracking a joke is somehow more offensive than printing fake snaps which will get British soldiers killed - and probably civilians too. Ain't it nice to occupy the moral high ground ?

Gender is a social construct, as any radical feminist (or the World Bank) will tell you. [irony]When Daisy plays with dolls and Jack kicks a football they are reflecting the overt and covert expectations of their parents and the wider society. With different parental and societal expectations, Jack might have a bed covered with fluffy toys while Daisy plays Unreal Tournament for hours with her girlfriends[/irony].

So when a baby boy (one of identical twins) had his penis badly damaged in a failed circumcision operation, his distraught parents were relieved to find a doctor who believed the theories. With a little more cosmetic surgery the baby could be brought up as a girl.

"This dramatic case," Time magazine reported "provides strong support for a major contention of women's liberationists: that conventional patterns on masculine and feminine behaviour can be altered."

You can read more about the disastrous consequences of the decision and the lunatic hippy doctor who destroyed a family in this distressing Guardian item - the first thing with Gary Younge's name on that I've ever been able to recommend unreservedly.
Posted by Laban at 2:02 pm No comments:
Self Hating White Liberalism - It's Infectious

Lord Carey, former Archbishop of Canterbury, talking on R4, condemns the latest execution video, calls on Muslim leaders to condemn it, and makes a couple of revealing asides on relationships between Muslims and 'the West' (I don't think he includes British Muslims here) - "and there are the Crusades, which are a problem". And on the Abu Ghraib revelations, "it is deeply shameful and indicts us all (my italics) in the West".

Now Lord Carey is by no means a stereotypical SHWL. His comments about Islam a month or two back earned him bad press from Guardianistas and Muslim spokesmen (not many spokespersons yet) alike. He is the kind of Christian who still reads the Bible, worries about human sin and frailty rather than Third World debt, and is not overly happy with homosexual bishops. So his comments reveal just how deeply the SHWL world view is part of educated English culture.

There's no doubt that our European partners (and a few Brits) did some bad things in the Crusades. From the sack of Jerusalem in 1099 (including the killing of the Jewish population, who sheltered in the synagogue only to be burned alive) to the attack on Byzantium, it could be said in President Clinton's words that "mistakes were made".

But there are one or two outstanding issues the other way. The Med was once a Christian lake. Turkey, Egypt and the whole of North Africa were Christian but were overrun militarily by Islam. These peoples weren't converted as were the Saxons and Danes. It was 'convert or die' for most (though not all) of them. Where now are the Galatian Christians to whom St Paul wrote ? Where are today's African saints ? Anatolia is full of ruined churches. Saint Sophia in Constantinople is now a museum (thanks, Fisky) in Istanbul. And of course the site of Solomon's Temple is now the Dome of the Rock.

This is not to say that I believe these issues should inform policy today. Fourteen hundred years is a long time. But apparently Lord Carey, like many others, believes that long memories are for 'them' and not for 'us'.

"It is deeply shameful and indicts us all in the West". Think about that. Does Saddam's regime, the latest horror decapitation video, or Osama Bin Laden indict all Muslims ? I thought stereotyping was one of the most feral creatures in the anti-racist bestiary.

But when 'Westerners' (a code name for white people - you could hardly call us Christians any more) do bad things - we are all indicted. One or several Muslims do bad things - they are not typical. Indictment is for 'us' and not for 'them'.

Labour - Preparing The Ground For What ?


I despair of this Government. I'm starting to get a John Major impression, that the policies get more and more short term and less and less thought out. The decision to liberalise drinking hours while simultaneously worrying about violent assaults being one example. But there are many more. Remember Prescott's pledge about the number of cars on the road ?

One particularly depressing story was the news that Labour want to introduce votes by text, in an effort to get more young voters involved. Not because the higher the turnout the better the democracy, but because "If the proportion of young voters increased, experts believe it would benefit Labour. One opinion poll earlier this year showed a majority of three to one in favour of Labour against the Tories."

Going for the Pop Idol vote in this way may have unintended consequences. What happens when a politically radical teen idol emerges ?

If Labour get their wish, half of all eighteen year olds will soon be in higher education. While this may (or may not) be a good thing, they will to some extent be insulated from the real world and therefore more attracted to a utopian, radical programme. Just think back to your student days. This effect would be greater still if we had votes at sixteen. And I'm sure that's just what some young Labour policy wonks would love.

But you may find your young texters are attracted to a different kind of radicalism and utopianism.

I wrote some months back "I see no sign at all of any (similar) youth movement on the Right. When the coolest kids in school self-identify as nationalists, when their bands are in the charts and girls wear 'My Boyfriend Is An Englishman' shirts - that'll be where the kind of fascism the Left disapproves of begins.

So if you want to prevent fascism, stop creating the objective conditions for it."

I hadn't read this article then.

"The most startling revelation of the report, entitled 539 voters' views: a voting behaviour study in three northern towns, is that, in the areas studied, the younger one is the more likely one is to vote BNP. Around one in three of 18-25 year-olds said that they voted for the BNP. 46 per cent said they had voted for the BNP on a previous occasion. While the Labour Party had strong support among older age groups, hardly anyone in the 18-25 category voted Labour. In this age group, large numbers of young men have been attracted to the BNP's message - making it the only party whose support is predominantly male.

The report suggests that other parties are failing to engage with this group of young men."

539 voters is not a large sample. But this is not necessarily a comforting message. When the girls come on board - that could be the pivotal moment. We shall see in a month. They are ringing their mobiles. But soon they will be wringing their hands.
Posted by Laban at 6:59 am No comments:
Blogger ...

I'm not sure how keen I am on the new Primary School Edition.
Posted by Laban at 6:53 am No comments:
Newer Posts Older Posts Home
Subscribe to: Posts (Atom)