Labour leader Ed Miliband said: "I'm not in favour of tax avoidance obviously, but I don't think it is for politicians to lecture people about morality.
"I think what the politicians need to do is - if the wrong thing is happening - change the law to prevent that tax avoidance happening."

Er ... could that be this Ed Miliband?

"David Miliband, the schools minister, and his brother Ed, the chancellor’s economic adviser, are set to avoid paying thousands of pounds in tax through an Inland Revenue loophole which the Labour party pledged to close. "


The Sunday Times has learnt that after Ralph Miliband, the Marxist father of David and Ed, died in 1994, he transferred almost all his assets, including homes in London and Oxfordshire, to his wife.


However, after taking professional advice, the family is understood to have posthumously rewritten his will to give 20% of the London home to both David and Ed.

This scheme is called a “deed of variation” and was highlighted by the chancellor in opposition as an unacceptable way in which the wealthy avoid paying death duties."

“Nice Euro you got here. Be a shame if somebody broke it.”

I get the impression the Euro elite, and especially the Germans, are very disappointed with the Greek vote. A Syringia vote would have been the signal for no EU money, bank runs, Euro exit within a few days.

Spain, Portugal, Italy would all get the message loud and clear.

“Nice Euro you got here. Be a shame if somebody broke it.”

Now the Greeks are in for more years of misery and unemployment - and IMHO they'll still end up out of the Euro. The same may well apply to Spain.

The analogy is a girl – as it might be Angela – with a hopelessly dependent boyfriend, Alexis. She doesn’t want to hurt him, but wants to dump him, so treats him badly in the hope he’ll find a pair from somewhere and break it off himself. Better for her, better for his self-respect.

Instead, he takes all the abuse and promises to be a better boy in future. Angela’s heart sinks … she’s still stuck with him…


It would certainly have been “interesting” in a Chinese curse sense had Syringia won. As I understand it from here, Syringia’s policies are

a) stay in the Euro
b) no to the austerity package

People voting for that platform would have been terribly disappointed one way or the other. If b) had been implemented, the plug would be pulled on Greece “pour encourager les autres”.

At the other end of Europe, Mrs Merkel campaigns on

a) no money printing, no German taxpayer subsidising the periphery
b) total commitment to the Euro project

Again, one way or the other voters believing both of those things are going to have a bit of a rude awakening.

Merkel is slowly, by inches, being dragged down the path of currency debasement and inflation, having sworn against it. The German people, having given up the Deutschmark on the understanding that the ECB would never countenance currency debasement and inflation, are also in for a rude awakening. The Euro elite don’t want to go down that path, but they’re running out of options, and Obama and Cameron are telling them “we’ve done it – what’s your problem?”

I personally find the prospect of the German electorate becoming massively disillusioned with their political leadership a lot more scary than a few thousand Greeks throwing things at the police. But then I’d never have thought that the leadership of the British working class would tolerate having their wages and conditions driven down by cheap imported labour, and I was wrong about that.

UPDATE - Jeremy Warner in the Telegraph on what some hedge funds are thinking :

Angela Merkel, the German Chancellor, has said no to virtually every form of debt mutualisation so far proposed. But kicking and screaming, she's in practice already agreed to some – the bail-outs – and if the single currency is to survive in its current form, she'll eventually have to go a lot further. The German Chancellor is something of a tease – she says no until she says yes. Numerous lines in the sand have been drawn only eventually to be surrendered as the crisis intensifies.

Hedge fund manager and top financial blogger John Hempton looks at the Chinese economy - basically describing how Chinese workers, forced by demography (one child policy) to save for their old age, and limited by the state in their investment options (to bank accounts with a below-inflation return), are robbed by inflation - the money going at low interest rates (negative real rates) to State Owned Enterprises - which are then looted by the elite.

The Chinese banks are the finest deposit franchises in human history. They can borrow huge amounts at ex-ante negative real returns.

And those deposits are mostly lent to State Owned enterprises.

The SOEs are the center of the Chinese kleptocracy. If you manage your way up the Communist Party of China and you play your politics really well may wind up senior in some State Owned Enterprise. This is your opportunity to loot on a scale unprecedented in human history.

Us Westerners see the skimming arrangements. If you want to sell kit (say high-end railway control equipment) to the Chinese SOE you don't sell it to them. You sell it to an intermediate company who on-sell it in China. From the Western perspective you pay a few percent for access. From the Chinese perspective – this is just a gentle form of looting.

And it is not the only one. The SOEs are looted every way until Tuesday...

A normal business – especially a State Owned dinosaur run by bureaucrats – would collapse under this scale of looting. But here is the key: the Chinese SOEs are financed at negative real rates.


People saving for their old age, then being robbed by high inflation to enrich a financial elite who benefit from negative real rates of interest? Thank God it couldn't happen here!

"... a broad consensus of Chinese economists says the country is overdue for another big push to encourage private enterprise and to foster a shift toward a more consumer-driven economy. The challenge, they say, is turning back China’s domineering state sector. But that seems increasingly unlikely. Publicly controlled enterprises have become increasingly lucrative, generating wealth and privileges for hundreds of thousands of Communist Party members and their families. And in a clear sign of its position, the government has moved to limit public debate on economic policy, shutting out voices for change. "

"I really am surprised there's not mass civil disobedience. Their 1930s forebears - right or left - wouldn't have stood for it."

And our tour of the industrial valleys ?

As you drive up the AS117 through Langreo to San Martin, you could be in the Swansea Valley or Vale of Neath - in the days when the factories were still open.

It felt like early 60s South Wales - a main road and a railway along the valley, houses clustered above where the valley was wide and crammed in where it wasn't, factories below. 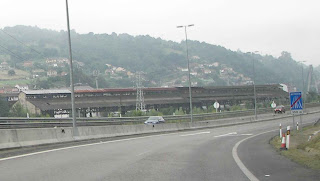 At San Martin, we passed the Pozo Soton coal mine and the Galva Zinc plant. The former is now the centre of what looks like a rerun of the 1984-5 UK miners strike.

Mining has been a key element in the local economy in the provinces of Asturias and Leon for centuries. Many miners fear that government plans to reduce subsidies from 300m euros (£242m; $376m) to 110m euros will doom their industry.

Spanish coal miners armed with homemade rockets and slingshots have clashed with police over the country's austerity measures. They fired on the officers in El Entrego near Oviedo close to the mine 'El Soton' which has been hit by cutbacks in coal subsidies. Strikes, road blockades and mine sit-ins have hit 40 pits as 8,000 workers in northern Spain continued their protests.

(incidentally, I note that the Mail's coverage is much superior to the BBCs, and that you'll search the left Brit blogs in vain for a mention of this story)


Two points. I'm not at all opposed to subsidies in the right place and time. The pre-Euro Spanish government managed to keep the mines going without bankrupting itself. La vrai France, so beloved of the English, the France of small family farms and little towns full of real shops, is a product of tariff and subsidy - and long may it remain so.

And rocketry - those photographs brought back memories of a much more irresponsible Laban, and of "battles" between student houses fought across streets from attic windows. It's surprising how accurate a tube-launched rocket can be - but when launching from indoors the loader also needs to have a paper plate or similar handy, to block the rear of the tube - otherwise the room soon fills with smoke, and the sparks can set things ablaze. Just ask Mario Balotelli.