I can't afford a subscription to the British Medical Jornal, so what a good thing that the Magna Mater Melanie keeps tabs on it. Last time she took issue with an item - not to mention the comments posted to it - this time she loves it. She seems to have found a Glasgow GP who's a Theodore Dalrymple clone. The link is pay-for, so via Melanie here's a sample.

'If you're male and of the underclass in inner city Britain then watch out, because your life may well be poor, violent, and short. You will leave school at 15 with no qualifications. This in itself doesn't matter, because the real barrier is your complete lack of any life skills or social skills. You will be incapable of living independently and won't even have the basic ability to clean, cook, or pay bills. You will never understand how social systems work, and the height of achievement will be to get on "the sick"... Your lack of understanding and communications skills means that even when minor problems arise you resort to what you know: aggression and violence. You may have a girlfriend, but when the baby comes along it's all too apparent that you have no parenting skills and can't cope. Your frustration is expressed through taking drugs and beating the only person who actually loved you. You never see her or your daughter again, but her brothers give you a beating just for good measure... The years roll by, and you continue to steal, take drugs, and carry and use a blade. One Saturday night a younger version of you, aged 16, sticks a blade in your chest over an argument about football, the passion that is your only acceptable emotional outlet. One hour later the doctors walk away, having split your chest open but to no avail. "Just another dead ned," they all think. Thank Christ, anyway, because even though you're only 27, in all likelihood you would have strung yourself up in the next few weeks. Your attacker gets 10 years and a ride on the merry-go-round that you've just left. Nobody cares. This scenario is played out 24 hours a day, 365 days a year across the United Kingdom.'

Once again there's plenty of moonbattery on display among the medical comments. The response from Paul S Mcloughlin, of Ottawa Health Research Institute, makes me assume he's the subject of the research.

And I wonder if 'Sol Ridgeback' isn't extracting the urine. I hope he's not serious but it's possible.

"This hurtful and inaccurate article .... these poor, uneducated and villanous males all of whom are victims of modern greed and neglect by society .... the charisma and strength of soul displayed by such poor 'boys' that have been forced to reside in youth housing schemes ... drug addictions and violence merely go hand in hand when youthful cries for help are ignored time and time again."

Here are a few typical Glaswegian victims of modern greed and neglect by society : 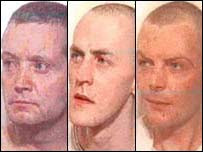 And this is how they display their charisma and strength of soul.

While we're on the urban angst track, Harry recommends this blog. Full of delicately limned sketches of Hackney life.

A bit difficult to parody anything which opens with "Welcome to the United Queendom of Great Britain" and asks "isn't it time you came out...to Britain !"

All entertaining stuff, if you can square the Governments health promotions with a site which tells you how easy it is to pull strangers. London is "catching the eye of a local as you cruise down Old Compton Street and holding his hand four hours later as you sit on a bench by the Thames."

Well holding something, anyway. I'm a little more concerned that taxpayers money is used to promote the following message.

“We also have equal age-of-consent laws (set at 16), partnership laws and even legal-commitment ceremonies in some of our major cities. As for marriage, it’ll just be a matter of time!”

When an unfortunate underclass woman, heavily pregnant, was stabbed to death in Hull, BBC Online had a tragic story.

"Murdered woman's babies also died" - was the headline on an item which began "Twin babies of a pregnant woman who was stabbed to death in a Hull street both died in the attack, police said."

21 hours later the headline reads "Extra time to quiz stab suspect". The babies have disappeared from the first paragraph as well.

Polly is on top form with her Vera Drake piece. . How about 'no woman ever wanted an abortion ?'. That's right, Polly - just like no man ever wanted to fill the car up with petrol.

But Ms Stevenson's sad fate illustrates Polly's point. "Whenever abortion is hard to get, thousands of desperate pregnant women end up dead".

And remember - organisations like Life offer 'pro-life propaganda'. Whereas the fictional Vera Drake is, according to Polly 'excellent social history' about the 'bad old days'. After all, "Ask any woman ... from those pre-60s liberation times and they all have stories to tell about sex and terror for themselves or friends."

The older members of my family can talk about little else.

Another For The Sidebar ...

Third Avenue - another Englishman in New York. Seems a civilised sort of chap. And apropos of nothing at all (other than the NY setting), a totally gratuitous link to the Susquehanna hat company sketch.

Woe unto any publicly funded body whose customers are mainly white, middle-class and middle-aged.

The Lake District is facing mass resignations by its volunteer rangers over a decision to scrap free guided walks in the national park because they do not attract enough people from ethnic minority communities.
Ranger-led walks are among 900 Lake District events planned for 2005-06 that are to be dropped because they appeal mostly to “white, middle-class, middle-aged people”.

It's true. "Visibly ethnic" minorities are like hen's teeth in Caldbeck or Cockermouth, although in summer Far Sawrey is besieged by Japanese lovers of Mrs Heelis. You will find the occasional black girl or young Asian professional walking the fells, but hoodies and gold teeth are pretty rare.

We were at Threlkeld sheepdog trials this summer (they were all found guilty) and - though it seems almost incredible in 21st century Britain - I'm sorry to have to report that there were very few black and Asian farmers present. There were however a few women farmers, one or two tweed-skirted, flat-shoed, mannish ladies with dogs, and a number of people with apparent disabilities - well, the beer tent had been open for several hours.

If this precedent is followed it could be farewell to most State subsidy of the Arts. Good riddance Covent Garden, get lost Glyndebourne, adieu Alhambra, ciao CBSO, push off Proms.

Above: not much melanin in evidence at Birmingham Royal Ballet.

The Royal Ballet was pretty pale last time I looked, too. And as for the arts and literature festivals - well, all the black faces at Cheltenham are on the lecture podium. Hasta la vista, Hay on Wye !

Cultures and Crimes - the Guardian strikes back

The new book on British policing, Cultures and Crimes by Norman Dennis and George Erdos, is dismantled in the Guardian.

"Leading experts on law and order have dismissed a claim that Britain has one of the highest crime rates in the developed world, caused by a decline in faith and moral values. "

Well, up to a point. We only get two comments - one from a Professor Mike Hough, director of Criminal Policy Research at King's College, London, who said: 'This is nonsense. Academics mostly agree that crime in the UK rose in the early 1990s, peaked around 1995 and has been falling ever since.'

Nothing like knocking over a straw man - Dennis' work is concerned with trends in crime from the 1950s to today. In any event, as Dennis responds, the only crimes which have fallen in the 1990s are those which the victim can do something about - burglary and car crime.

And an ACPO (Association of Chief Police Officers) spokesman called the book 'simplistic'. Nothing like a detailed rebuttal. Norman Dennis calls this approach 'contentless criticism'.

The Home Office have also chipped in, with the remarkable statement that "the risk of being a victim of crime is at its lowest since records began."