Back - but suffering bloggers block. Apologies. But a week in a somewhat rainy Gower did give me the time to get through Chris Bellamy's Absolute War - the story of the Eastern Front before and during WW2, including stuff which came from Russian and other formerly Soviet archives after the collapse of the Soviet Union.

a) the German declaration of war has been considered to be - certainly by me - nowt but a smokescreen to cover their aggression.

the Government of the Reich declares, therefore, that the Soviet Government, contrary to the obligations it assumed,

1) has not only continued, but even intensified its attempts to undermine Germany and Europe;

2) has adopted a more and more anti-German foreign policy;

3) has concentrated all its forces in readiness at the German border. Thereby the Soviet Government has broken its treaties with Germany and is about to attack Germany from the rear, in its struggle for life. The Führer has therefore ordered the German Armed Forces to oppose this threat with all the means at their disposal.

Well, they would say that, wouldn't they ? But it turns out that there was some truth in it - at least as far as the Red Army was concerned. Their forces were concentrated on the German border - as some Soviet diplomats admitted. Defensively, they'd have been better off pulled back - but they were deployed for offence. Bellamy explores the (previously unknown to me) thesis of Viktor Suvurov, who argues that Stalin's long-term strategic intention was to attack Germany after both sides in a Germany/GB and France war had worn each other down - precisely the strategy that he feared Britain adopting vis a vis the Nazi-Soviet conflict.

Whether or not that was the strategy, it must have come as a nasty shock to Stalin when France collapsed, and huge German land forces were almost idle on the continent. The Red Army was still weakened from the purges of the late 30s, and was simply not ready to attack Germany with any hope of success, although they had been quietly mobilising an extra 800,000 men since April 1941 and developing new offensive weapons (the Red Army had been doubled in manpower since September 1939). Stalin may have wanted to attack Germany in 1942, as Constantin Pleshakov argues, and with no alternative defensive plans prepared have been left with no option but to combine hurried preparations for a pre-emptive strike (Zhukov's plan of May 15, 1941) with increasingly desperate attempts to placate Germany and buy the time Soviet Russia so desperately needed.

b) Hitler didn't have a huge amount to teach Stalin about persecution of ethnic minorities. While he didn't build any gas chambers, the Gulag and transportation to places like Siberia did a pretty good job of killing millions.The list of expulsions is pretty impressive - from Cossacks and Tartars to Finns, Koreans, Chinese, Germans and more exotic, little-known groups like the Kalmyk, Hamshenis and Basmachi. In the wide open spaces of the Soviet Union minorities deemed unreliable or dangerous could simply be rounded up and deported to remote or undeveloped areas - with, it must be said, a high incidental death rate. We know what a German Stalin was capable of in the relatively confined spaces of Germany - great hatred, little lebensraum - might a Jewish Autonomous Republic still have been created under a Russian Hitler ? Unlikely, but I suppose possible.

Bellamy's book has a map - which unfortunately doesn't scan well - of the deportations, and a detailed one of the Caucasian ones which also doesn't scan. Here's a modern map - you can see why the area's still a bit of a hot-bed today. 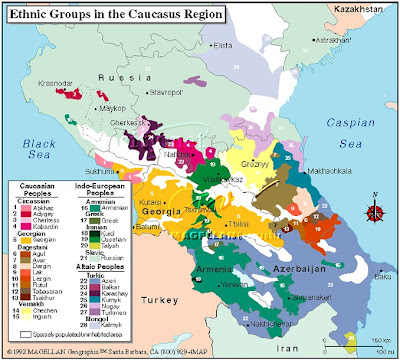 Ethnic groups all over the place. I can't understand why Stalin didn't just celebrate the diversity, as we would in say London. The Chechens fought the Soviets from 1940-44, so you can see why the Russians aren't too keen on them even today.

The consequences of the deportations - and of encouraging the movement of 'reliable' ethnic Russians into border areas such as the Baltic states - are still with us today. While many of the deportees (excepting the Germans and Koreans - fascinating stuff here at Far Outliers) have returned post-Stalin or later (some deportations were still happening as late as 1970), a lot of the Russians who moved remain.

c) it's not as if I didn't know, but the sheer nastiness of the whole thing - on both sides - depresses anew. Not a gentleman's war. Here's General Kielmansegg on June 23rd.

"the next day we found all the (missing German) personnel shot, that is murdered, and atrociously mutilated. Eyes had been put out, genitals cut off, and other cruelties inflicted. This was our first such experience, but not the last. On the evening (after) these first two days I said to my general 'Sir, this will be a very different war from the one in Poland and France'".


UPDATE - there's another depressing note. I'd known about Maclean, Philby and the rest of the Cambridge Five for ages. But it's when you read the history and put that betrayal into context that the enormity of it becomes apparent. Truman and Churchill tell Stalin at Potsdam about new weapons with enormous destructive potential, and Stalin shows little interest. They wonder if he's grasped what they're telling him. But Stalin knows about it already. Donald MacLean's been keeping him informed for the last three years. Pity they didn't hang him.
Posted by Laban at 6:43 am
Labels: history
Newer Posts Older Posts Home
Subscribe to: Posts (Atom)