It should really be in Leeds, but anywhere is good news. London Guildhall from Monday :

Over the last forty years, Atkinson Grimshaw's beautiful and evocative paintings of moonlit suburban lanes, gas lit city streets and docksides have emerged as some of the most popular works of the Victorian age. This touring exhibition is the first major show of Grimshaw's work for over thirty years. It includes more than 60 paintings from his earliest Pre-Raphaelite inspired landscapes to the Impressionist style seascapes of his last years. The show also includes drawings, manuscripts and photographs on loan from public and private collections and descendants of the artist.

The Grimshaw site is excellent : 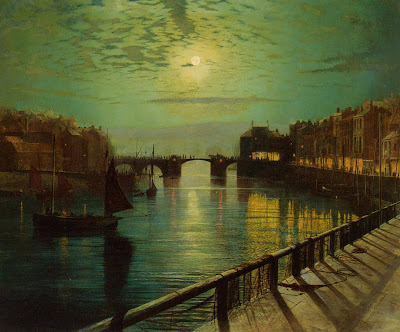 Do You Remember The Days of Slavery

I commented a while back on the radical new "welfare to work" strategies allegedly being pioneered by the travelling community in Gloucestershire, Leicestershire and Derby, which were reportedly capable of transforming homeless alcoholics, one of the more intractable and challenging groups for any social worker, into dedicated Stakhanovite block-paving operatives working up to 14 hours a day.

It looks as though transformative work therapy is being more widely practiced than thought - and with characteristic modesty, the liberal mouthpieces of said community are neglecting the opportunity to more widely publicise alleged achievements which the publicly funded welfare to work agencies such as Atos could only dream about.

I must say this BBC report is very mean-spirited, and seems to show little understanding of modern labour market conditions and radical management styles :

"Twenty-four men suspected of being held against their will have been found during a raid at a travellers' site. Four men and a woman were arrested on suspicion of committing slavery offences in the raid at Greenacre travellers' site, Leighton Buzzard, Bedfordshire, on Sunday. The men, who are English, Polish and Romanian, were found in "filthy and cramped" conditions, police said. Detectives believe some may have been there for up to 15 years.

Those arrested are being held on suspicion of committing offences under the Slavery and Servitude Act 2010. They are being held at police stations across Bedfordshire and Hertfordshire. Weapons, drugs and money were also found at the site, police said."

I don't know. There's always someone waiting to trumpet an anti-business agenda - and more often than not it's the BBC.
Posted by Laban at 2:23 pm 8 comments:
Labels: travellers, UK politics
Newer Posts Older Posts Home
Subscribe to: Posts (Atom)