"Good morning, this is James Naughtie in London"

"And Sarah Montague in a leather jacket, mini, and heels in Ipswich"

"Later in the programme we ask - should sex workers get more Government support ? Is it time for heroin to be given free to vulnerable key workers ? Should using the word 'prostitute' be a criminal offence ? But first, the news from Ipswich ..."


"... in the Five Live phone-in today - how would YOU go about finding a ruthless killer ? Call us on 909 or 693. And after the discovery of two more bodies yesterday, we ask - is it time for us to give these vulnerable girls whatever it is they want - if it will help to save lives ..."

"Today in Woman Sour, we talk to a woman who say that sex work is, for her, the most empowering and liberating employment she knows - we speak with the mother of a young heroin addict who disagrees - and Julie Bindel on why all women will continue to be in danger until the last man is fed screaming into an industrial shredder."

"In Newsround today, fifteen-year old Danela talks about her abduction from Moldova, her journey to Britain and her life as a sex worker in a Gloucester massage parlour. And in Blue Peter, you can see her again, when she shows how to make a condom from an empty Tesco carrier bag and some strong elastic bands ..."

"This is Drive on Radio Five, with Rachel Burden in the studio"

"And Peter Allan in a rather fetching wig and fishnets, on an industrial estate just outside Lowestoft. Are you looking for business ?"
Posted by Laban at 10:37 pm 26 comments:

Is Sociology At The Root Of Our Problems ?

" ... I certainly wouldn't say marriage is a cure for poverty - the cure is more money, but I do see the flight from marriage as problematic: what we see here is the cultural ambiguity of ..."

... with a cry of "For God's sake !" Laban reaches out and turns off The Moral Maze after only thirty seconds. The flat Northern vowels of Claire Fox are replaced with the gentle hum of the computer fan and the occasional slight bumping of a hard disk. Bliss.

"Pleasure is simply the absence of pain".
Posted by Laban at 8:05 pm 5 comments:

A few small observations on media and other coverage of the Ipswich unpleasantness which so dominates the airwaves and press.

a) the attitudes of a Reclaim The Night march back in the Eighties are now entrenched in editorial positions. The working girls are almost becoming street heroines, the punters are the scum of the earth, and while there may be a shortage of punters at present, there's no shortage of journalists wanting good interview.

b) I'm pretty sure last week I heard Eddie Mair on R4 ask a senior police officer "The pimps are asking for an amnesty - are you prepared to offer this ?" - the first time I've heard the BBC acting as intermediary in this way.

c) a number of bloggers and journalists seem unclear on the law. Prostitution has never been illegal in the UK, but soliciting in the street is, as is 'controlling prostitutes for gain' e.g. pimping/poncing, and as is 'keeping a brothel' where more than one prostitute works.

d) some writers who rarely if ever write about the many, many victims of murder are for some reason writing about these victims. Street heroines again.

e) if anyone can point me to the remarkable column I glanced at yesterday, which said the murders were the fault of a society which "either puts women on a pedestal or considers them whores", I'd be grateful.

f) I'm going to take a punt on the killer and do some outrageous stereotyping, based on my deep knowledge of a couple of Ruth Rendells and an episode of Morse. Once upon a time in a place like Ipswich you'd have looked for the strange, withdrawn farm lad - still at home aged 33, good with animals, bad with people.

Most of the native farm boys have been made redundant, replaced by young single Catholic lads a long way from home.

g) I lived in Bradford during the Ripper years and knew one of his prostitute victims (not professionally). It should be unnecessary, but I suppose I'd better say that I disapprove of all murders, no matter who the victim.
Posted by Laban at 8:04 am 17 comments:

Fame and being plugged by Ian Dale has gone to Bob Piper's head. He's given the blog a makeover and embarked on a shameless headline-grabbing campaign, suggesting that David Cameron is the secret love-child of former newsreader Jan Leeming and the late Dai Francis (pbuh). 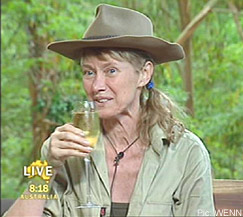 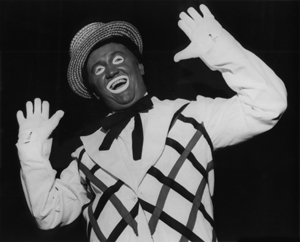 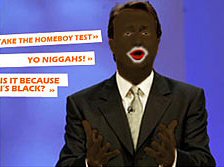 Tagged by Sarah at St Bloggie... hope the little lad gets well soon.

1. Plumb in new central heating, new kitchen and bathroom - again. Life's too short - I should have paid someone. All those weekends with the family lost forever.

2. Get to ten. There are many things I don't fancy doing - but never is a big word. I might be desperate !

Expat Yank has gone Wordpress - six weeks ago. The trouble with relying on Bloglines is you don't notice the move - you just wonder why he's not posting.

Having a favourite blog undergo a makeover is like the wife returning from town with radical new hairstyle. You'll get used to it and grow to love it, but what was wrong with the way it was before ?
Posted by Laban at 10:32 pm 2 comments:

As reported by Norwich Union and a number of other insurers.

More than 22,000 fraudulently-staged and induced motor accidents have taken place on UK roads since 1999 and the practice is spreading, it was revealed today.

Insurance fraud, eh ? How does it work ?

Typically in such cases, fraudsters drive to busy road junctions and perform unexpected, unnecessary and dangerous emergency stops designed to cause innocent members of the public to crash into them.

Claims are made to the innocent motorist's insurer, often including several accounts of fictitious injuries from members of the criminal gang.

For each successful scam, the criminals can net up to £30,000 and the IFB said there was growing evidence to show that the proceeds from this type of fraud were used to fund other forms of serious crime, including drugs trafficking and gun running.

Fraudulent insurance claims meanwhile were adding 5% to the premiums paid by the honest public.

Where's this happening then ?

The "cash for crash" number one hotspot was Blackburn, where there have been 1,710 incidents over the last seven years, according to figures from the recently-formed Insurance Fraud Bureau (IFB).

Blackburn, Bradford, Birmingham, Oldham, Bolton, Manchester. How very strange. I'm sure those places share something in common. Let's take a look at the detailed data (pdf).

After Manchester, the scallies of Liverpool - then Preston, East London, Luton. Still seeing the pattern. Twickenham, Harrow, Leeds, Southall. It's still there.

What have these places all got in common ? Obvious, isn't it. They all elect Labour or Lib Dem MPs !

UPDATE - the commenters at the Manchester Evening News have noticed too.
Posted by Laban at 8:33 pm 14 comments:
Labels: cash for crash, culture

What the Butler Drank

When I heard yesterday that the Anglican Bishop of Southwark, Tom Butler, had been mugged, my initial reaction was highly unChristian.

"Perhaps he'll change his mind about those poor criminals, victims of our punitive society" thought I. Tom Butler is so woolly and so liberal-left he makes Rasputin look like Pope Benedict. If it's in the Guardian or Indie it'll be on a Southwark press release afore too long.

Turned out the mugging may have been self-inflicted. But mitres off to the Bishop for his brilliant one-liner. Say what you like, the man's got style.

The Right Reverend Tom Butler, Bishop of Southwark, reportedly staggered home from an embassy function and climbed into the back of a stranger's Mercedes, where he started throwing an infant's toys. He was pulled out but toppled over and suffered several head wounds.

Asked to explain himself, he is claimed to have said: 'I'm the Bishop of Southwark. It's what I do.'

Almost as amazing is the revelation that people in 2006 go for a drink in London and leave their Mercedes unlocked.
Posted by Laban at 12:11 pm 3 comments:
Newer Posts Older Posts Home
Subscribe to: Posts (Atom)