I'll leave the final word to Jim Knight, Minister for Schools. He ministers to schools - hence the title:

"There are thousands of highly talented individuals in this country who are considering their next move, who want to do something challenging, rewarding, that is highly respected and where good people have great prospects," Knight said.

Mr Knight, sadly, will never know how much comedy he's managed to pack into one sentence there.

Posted by Laban at 12:35 am 5 comments:
Labels: best-educated generation in history, education, the contradictions inherent in the system

... alas, too much work. But not enough work is worse.

This is, while not totally surprising, still food for thought :

The CIA is now running its own agent networks on an unprecedented scale in the British Pakistani community. A British security source told me that somewhere between 40 and 60 per cent of CIA activity designed to prevent a new terrorist spectacular on American soil is now directed at targets in the UK ...

A former CIA officer who still does freelance work for the agency, said: ‘Britain is an Islamist swamp. You don’t want to have to spend time spying on your friends.’

As far as our closest ally is concerned, Britain is not part of the problem, Britain is the problem. Bruce Riedel, a former CIA officer and Middle East expert on the NSC for three presidents, who has just been appointed to head Barack Obama’s overhaul of Afghan strategy, told me: ‘The 800,000 or so British citizens of Pakistani origin are regarded by the American intelligence community as perhaps the single biggest threat environment that they have to worry about.’

The Economist was only the other day bemoaning that the new Brit 'Hearts and Minds' strategy wasn't doing the biz.

You don’t have to support the Iraq war or Israeli aggression to know that governments need to be free to make decisions in the national interest without trimming their sails to avoid annoying potential homegrown terrorists. But the quest to prevent a new atrocity has become the secret driving force of British foreign policy. The reason is the debilitating fear of what would happen if British militants succeeded in an attack overseas. David Miliband’s trip to India after Mumbai was a diplomatic disaster. Imagine how much worse it would have been had British extremists, as was originally feared, been behind the attacks. British India policy now would be a protracted effort to placate and apologise.

I've already pointed out that we are approaching the stage where one community may be able to wield a veto over certain aspects of foreign policy. But not quite yet :

Muslim extremists shouted abuse at British soldiers during a home-coming march by the 2nd Battalion of the Royal Anglian Regiment. A group of around 20 men in traditional Islamic dress held up banners and placards that read: "Anglian Soldiers Butchers of Basra", "Anglian Soldiers Criminals, Murderers Terrorists" and "Baby killers".

As the battalion, which is nicknamed The Poachers, reached Luton Town Hall the small group shouted and yelled "Terrorists" and "Anglian Soliders Go to Hell." The protestors then had to be protected by police as angry supporters of the soldiers turned on them shouting: "Scum" and "No surrender to the Taliban."

As the parade finished in St George's Square in front of the Duke of Gloucester, Colonel-in-chief for the regiment, the Lord Lieutenant of Bedfordshire, Sam Whitbread, a General Sir John McColl KCB and the Mayor of Luton, Councillor Lakhbir Singh, police had to force the protestors into a small area reserved for them by the town's Arndale Shopping Centre. 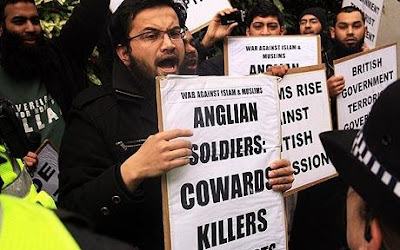 Elsewhere, a commenter called Amnesty2009 posts as follows in the Guardian :

I am a retired UK Immigration officer, I experienced four amnesties under various guises during my time with the Immigration Service. Each one acted as a powerful magnet to illegal entrants. My colleagues and I spent long hours engaged in the demoralising activity of endorsing travel documents of immigration offenders with leave to remain after they had succeded in circumventing the legitimate border controls imposed by Parliament.

Most of these offenders obtained this leave with the assistance of legal aid, advice agencies funded partly or entirely from public funds or from charitable sources within the UK that arguably should have devoted their resources to legitimate UK needs.

The UK does not need any more primary immigration.It does need to adopt a genuinely firm and fair border control. The new UKBA and the policies it is espousing will not protect employment for the British people or control the influx of persons likely to harm society.

It is disappointing that UKBA current management, now mainly people who have very limited experience of how border control really operates, will always offer a "success story" mantra when the reality is a state of close to collapse almost all the time.

An amnesty will without doubt encourage the extreme right, I believe this would be a most damaging move at this time.

and (responding to "there has never been an amnesty on illegals. There have been a variety of concessions e.g. if your child is still under 18 and has lived here for more than 7 years (that one has now gone). Most of what he/she refers to as "amnesties" have been very real humanitarian decisions")

The concessions to which you refer were never called amnesties but the had the same effect. The first was for the old style "clandestine" illegals in the 70's. Those who had "come up the beach". I spent a lot of time interviewing people who claimed to have done just this thing "years ago" and founf a great number to have been recent arrivals, visitors from Asia and Africa in the pre visa days who had come specifically to take part in the "amnesty".

Later were the "family reunion exercises" where one member of a household would present to an Immigration Office to declare that he now had an extended family in his home country that needed to join him in the UK. Not infreqently these individuals were found to have returned to the land from which they had fled in order to maje arrangements for these relatives to join them.

There have also been concessions for the "unremovable", those who will not cooperate with the redocumentation process and cannot thus be removed to their country of origin. I have personally encountered a great many Albanians who, after gaining settlement in the UK, travel to Albania with impunity. Some even obtain Albanian passports from their Embassy and apply to have the residence stamp transferred from their refugee travel document into the previously unobtainable Albann national document.

There are genuine refugees out there but there are a great many foreign nationals in the UK who have outragously abused the asylum system and a great many intelligent people who have facilitated their devious acquisition of residence in the UK. It is to the great shame of the legal profession how many solicitors have obstructed the work of my former employers over the years. I am glad I am no longer responsible for trying to do the right thing for the British people as it is desperately depressing seeing the failure of the control again and again.

I believe employers do hold an important key here. If they are concientious in their pre hire checks then the pull on inward migration will be greatly reduced. Nothing will stop the black market but there are a limited number of areas where this is a major factor. The Chinese criminals will always find work for the luckless individuals that have been trafficked for example.

If employers really do check the status of job applicants then the huge number of Brazilians for example will have less incentive to come here.

The EU problem is probably too difficult to resolve, Romania and Bulgaria were not ready to join and it is arguable that the Baltic states were on the edge of economic effectiveness. We have received huge numbers of Romanians who do not have jobs to come to, the Police are well aware of the increase in crime engendered by these individuals, I know of Romanian interpreters who are making a huge amount of money in the Met police area.

We are currently obliged to accept all EU nationals and the restrictions on Romanians and Bulgarians are in name only. When I was still working (2007) we had no instructions to treat these nationals any differently from the rest of the EU. We can do something about the non EU illegal workers but Home Office has no stomach for the fight. Senior managers would rather spend money on two new uniforms in two years than provide sufficient detention and escort capability to enable my former colleagues to effect the removal of failed asylum seekers and illegal entrants. These offenders are frequently "bailed" and then abscond.

You are indeed correct to say that amnesty results in rapid advancement to citizenship. I again draw on 21 years experience on the border control to observe that many UK passport holders of non UK origin encountered speak very little English yet have acquired British citizenship ,following asylum, claims , after only four or five years.

Prior to my last job at Heathrow I worked in the Croydon office of the then IND, there was then a requirement for applicants to demonstrate a knowledge of the English language prior to naturalisation. I don't believe this has ever been adhered to or that it ever will.

Finally - this cracking polemic, on knife crime, Jade Tweed, and one or two related matters, from Martin Kelly. Agree with every word (as so often).

Posted by Laban at 12:03 am 18 comments:
Labels: demography, immigration, the contradictions inherent in the system, UK politics

A Bank of England supremo said it would be "easy" to stop inflation from racing ahead despite "printing" £75 billion of money to boost the economy.

Writing in the Daily Mail, the bank's deputy governor Charlie Bean said although it sounded "too good to be true", the extra money was needed to help save the country from a "particularly nasty recession".

The cash injection - technically known as quantitative easing - happens through the central bank buying up a range of financial assets from the private sector. It is designed to bolster firms' spending power for other goods and services, helping to drive up economic activity.

Mr Bean said: "In normal times. an injection of extra money of this magnitude might be expected to lead to too much money and spending in the economy and a rise in inflation.

"But right now, there is not enough money and spending in the economy and that is what we need to rectify.

Now the problem is that "there is not enough money and spending in the economy".

It's a long long time since I studied economics and I'm sure it shows. But if there's not enough spending (aka the money's velocity is too low) will adding more improve things ? Will the dosh go to improve bank balance sheets ?

And when the velocity does pick up, won't prices take off as that extra dosh emerges ?
Posted by Laban at 8:50 am 8 comments:
Labels: credit crunch, UK politics
Newer Posts Older Posts Home
Subscribe to: Posts (Atom)