Just how much contempt does "Sir" Ian Blair have for us ?

IMHO, it's so deep that no one has yet reached the bottom. Even this chap would find it tricky.

I'd missed the story that Met officers actually tried to stop the press photographing the 'suicide bomber' on Saturday. 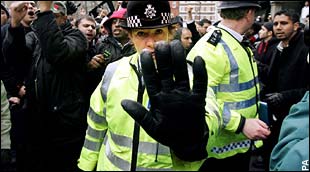 "Move along, nothing to see here"

(pictures from the Telegraph story)

Police said they did not make arrests for fear (my emboldening) of inflaming the volatile situation.

A Special Branch source told the Mirror: "Officers were told not to make arrests except in the most severe circumstances."

He said Metropolitan Police chief Sir Ian Blair "thought it would be bad if TV images went around the world showing his officers getting into scuffles with young Muslims".

That sounds par for the course. Reminds me of Labour Minister Denis MacShane explaining (with commendable honesty) why not enough was done before 7/7.

“My generation of Labour MPs don’t want to indulge in anything that smacks of Muslim typecasting or hostility. And as we tried very hard not to be like Norman Tebbit or the more ugly tabloids, it’s fair to say we failed to work out an adequate political response to Islamist politics in the UK.”

There are calls for a Free Speech demo in London on Saturday. Just you wait. If anyone has placards with cartoons on, they'll be in the vans before you can say 'dhimmi'.
Posted by Laban at 8:29 am
Labels: Ian Blair

Information about the demo was passed to me via one of the multi-faith groups.

It's worth turning out for the protest, because we have to protect our freedoms. I suspect there will be far fewer right wing BNP types than your regular Londoners who have just about had it with seeing preferential treatment given to Muslims over here.

It's time the silent majority spoke out...

Lucky that guy wasn't waving a Brazilian flag. Or it would have been seven in the head for each.

From the Telegraph story:

The BBC disclosed yesterday that it has received more than 2,400 complaints after showing "fleeting images" of the cartoons in news reports.

That's very strange, because I followed a link from Scott Burgess' comments section to a "say your piece" thing on the BBC's web site where page after page after page of comments were running about two dozen to one in favor of publishing the cartoons. But another Burgess commenter had another link to what was, I believe, a different version of the comments page for the same story. The second one had a blurb about "technical difficulties" at the top, and a much, much smaller set of comments. Those were about fifty-fifty either way.

Part of the problem here is the blurred distinction between war and peace. The muslim extreme are at war with us and their actions have to be seen in that light. As their numbers grow in the UK that will become more noticible. Liberals (and the police) are largely trying to carry on as if it were just a matter of policing, civil order etc. That Brazillian bloke was an unfortunate casualty of war, the whineratii are determined to plough on as if it were a pure policing matter.

The killing of De Menezes was a disgusting disgrace (shooting a man who was co-operating and was obviously not wearing a suicide bomb 7 times in the head?). The cover-up of the De Menezes murder was, like the police's turning a blind eye towards the faux suicide bomber, a result of a policy which prioritises perception and image over reality.

Funny how the Muslim guy was not shot in the head 7 times in, whereas an innocent man wearing a a shirt and denim jacket was murdered by Sir Ian Blair's baboons.

Like I said - an unfortunate casualty of war. Still if you want muslims living in our country, thats one of the unhappy downsides. I need hardly point out the manifest benefits, Ill leave that to you.

What on earth do they mean by the "most severe circumstances"?? Perhaps that the "fake" suicide bombers turn out to be real?

I just linked to your blog, keep up the good work!

No need for that, old chap (assuming you to be the bnpandme bloke).

I think you'll find the people doing most of your recruitment at the moment are called Jack Straw, Ian Blair, and some chap in Lebanon who organised the loonies on Friday.

I forgot to say Hi, Nanette.

Good to hear from you. You don't know that Adloyada lady, do you ?

Well, Laban, aren't you going to answer the man? IS he too saucy for you?