This is just wonderful :

Posted by Laban at 11:45 pm No comments:
Labels: music

"A Beacon of Holocaust Excellence"

Told you so. But even I didn't think they'd take it to this extreme. The Germans don't, and they were the ones who committed the crime, with help from assorted Eastern Europeans. This blog, on Shoah Memorial Day last year :

As long as our rulers feel that we need to be reminded of the evil of the Mail or Sun's views on asylum and immigration, the drum will continue to be banged and schoolchildren will continue to make unpleasant remarks to German exchange visitors ...

Our government are worried about how all the different tribes in the UK will get on. Hence the dire warnings. Strangely, they seem convinced that it's the natives who are most at risk of packing cattle trucks or doing some quick machete work. I'd disagree.

They could of course try to reverse, or at least slow down, the tribalisation of Britain - by which I mean the proliferation of disparate ethic/religious/cultural groups with no common culture - surely not a recipe for harmony in Kenya, Kent or Kathmandu. But I think an increased "educational" effort in the schools is far more likely.

Hundreds of schools across the country are to become specialist centres of Holocaust education under a national scheme launched today.

The plan, which will be rolled out in 300 schools, forms part of the new £1.5 million Holocaust education programme run by London University’s Institute of Education.

As The TES revealed in November, the Holocaust Education Development Programme will provide extensive specialist training for 3,500 teachers - one from every secondary in England.

The first cohort of 150 will attend a one-day workshop in London at the beginning of November and a second workshop three weeks later. This will be followed by similar sessions in Liverpool. The training will then be introduced across the country over the next two years.

From these teachers, 300 will be able to follow up their training with a masters degree module in Holocaust education. Their schools will then become designated beacons of excellence in the subject.

At home, Gordon is about to print more money, having failed last time round to trigger the inflation which is his great hope for cutting the value of debt (and impoverishing those with savings or on fixed incomes).

Dow's Wilton plant is the only one in the UK to produce ethylene oxide.

Al Gore - 'Fighting Climate Change Is Like Fighting The Nazis'

(and fwiw, I don't think those (presumably Muslim) workers should have been sacked, unless there was more to the mail than has been reported. It might be a stupid comparison, but it's not racist. Stupidity, and the expression thereof, should be as basic a human right as any of them.)
Posted by Laban at 10:15 pm 11 comments:
Labels: the contradictions inherent in the system, UK politics 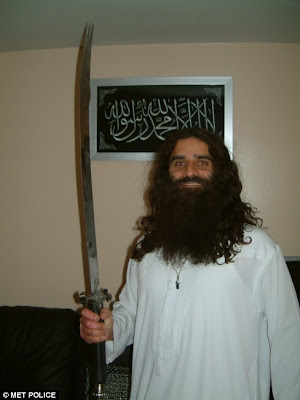 An NHS nurse who was employed full-time at two hospitals 150 miles apart has been suspended for a year at a conduct hearing.

Athene Baiete-Coker worked at Cardiff's University Hospital of Wales and for Guy's and St Thomas' NHS Foundation Trust in London for almost a year.

When it became too much, the 32-year-old took sick and annual leave from one hospital to work at the other.

Hmmm. At best you do have to question her judgement. At worst ...

Ms Baiete-Coker, who moved from Sierra Leone to Cardiff with her family when she was 14, said she was already working at the University Hospital of Wales (UHW) when she accepted the other job. She said she wanted to be in London where her fiance lived, but her mother in Cardiff became ill with a brain tumour and she had to look after her.

"In my culture, the eldest automatically becomes the main provider or sole provider," she said, "Because my mum was a single parent it was always left to me."

Ms Baiete-Coker said her brother suffered from mental illness after a racist attack and was unable to work.

Hmm. Single parents, a culture that leaves it all to her, brain tumours, racist attacks - she never had a little lamb but it was sure to die. What a most unfortunate woman.

Suspending her for a year, Ms Alderwick said her offences showed a degree of planning and premeditation.

But she added: "We accept she was naive, foolish and stupid rather than rotten to the core".

Posted by Laban at 8:50 pm
Labels: jobs the locals won't do

At B-BBC.
Posted by Laban at 1:08 am 11 comments:
Labels: demography, we're not having kids
Newer Posts Older Posts Home
Subscribe to: Posts (Atom)