"a better mix of pupils"

In my post on the thin line between state education and propaganda, I mentioned the Burnley experiment/social engineering project of merging existing, de-facto segregated schools.

Because of the way school catchment areas had been set historically, he explains, Burnley's secondary schools had been either overwhelmingly white or overwhelmingly black. The white schools got good results and were oversubscribed, and the minority ethnic schools got poor ones. All this is changing, partly as a result of a report published last summer on the reasons for the disturbances.

"The county council is completely reorganising the schools, including the catchment areas, so there is a better mix of pupils," says Labour councillor Mark Townsend. "Five new schools have just opened and we've got rid of all the old ones so the kids now have the chance to grow up together"

I don't know the area at all well. But one of the new schools, Hameldon Community College, doesn't exactly seem to exude that glorious rainbow ethos. It has 1,700 pupils and was created by merging Ivy Bank High (41% in the 2001 tables) with Habergham High School (66%) to produce a school with "more than 40%" A/C passes. You'd rather have hoped for 53% even if there was no improvement.

Two youths are being questioned after a 15-year-old boy was attacked at his school with a baseball bat. The teenager was in the grounds of Hameldon Community College in Burnley, Lancashire, when he was set upon during the lunch break on Friday. The boy was taken to hospital with head injuries and later discharged. A second pupil, aged 15, who suffered a fit was also treated in hospital ... A spokesman for Lancashire Police said: "Police are continuing to investigate the incident, which is being seen as an isolated incident involving a small number of people." The injured pupil is Asian, but police said there was "no suggestion" the attack was racially-motivated.

Following this incident school attendance dropped to 50%, then 25%. The comments on the stories are worth a look. Admittedly it was coming up to Christmas - this may have tipped the scales on keeping pupils away. Police have since decided the incident WAS racially-motivated - no word on whether it's still 'isolated' or 'random'.

Schools usually fail for a toxic cocktail of reasons. To start with, 1,700 pupils is far too many for any school - especially one with no sixth form. How can the teachers know all the kids, to start with ? And, just as any country with 'Democratic' in its name is a dictatorship, so the word 'Community' in any institution should set alarm bells ringing. You know at once that whatever you'll find in the area, it'll certainly be uncontaminated by community. 1,700 pupils - and precisely 60 parents turned up to the two meetings held by the school to reassure them. Whether the parents couldn't be bothered, or whether they thought any reassurances would be worthless platitudes, who can tell - either way it's not good. The school is rated a disaster by the most important users - the parents.

On Monday it was revealed that the school was a first-choice option for fewer than 100 youngsters across the borough when Year Six parents were asked to pick at least three establishments where they would like to send their child for secondary education. Burnley Council leader Gordon Birtwistle said before Hameldon was created, Ivy Bank and Habergham High Schools could expect to attract about 600 such applications each.

From 1200 first choice applications to 100. The chief exec of any PLC whose share price fell like that could expect to clear his desk (admittedly he'd leave with a million or two and a huge pension).

It would be premature to assume that the council's decision to merge one mainly white school with a mainly-Asian one in the interests of "community cohesion" is the sole cause of the school's troubles. I wonder how the magnificently named Shuttleworth College (named after Ken I trust), Sir John Thursby and Blessed Trinity are getting on. I'll lay a pound to a pinch of s***, as they say in the Black Country, that the Catholic school has the best results.

But the failure of two out of five doesn't bode terribly well. Never mind, it's only a few kids' education and it's in a noble cause. If they don't get educated there are plenty of educated East Europeans. Can't make an integrated rainbow omelette without breaking a few lives.
Posted by Laban at 9:54 pm 15 comments:
Labels: education, white liberals

US Army blogger Major Andrew Olmsted was killed in action a few days ago, along with fellow-soldier Captain Tom Casey.

His last despatch is here. He left an 'in the event of something happening to me' post here. Please read the whole thing.
Posted by Laban at 10:51 am 1 comment:
Labels: blogging

Time was when you couldn't get your kids into those useful winter items, vests. They'd go to school freezing rather then wear such a duff item of kit. I believe a lot of shops no longer do the stringies.

They cost a lot more (surprise) but the Canterbury sports top seems to have been successfully marketed to the youth as an expensive, fashionable replacement. But at least and at last the boys are warm. 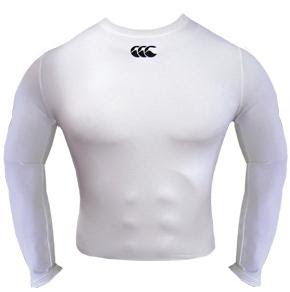 (Some of the old stuff's coming back. My sixteen year old has just bought a black trenchcoat - very smart. I'm hoping he'll invest in a low-brimmed hat as well).
Posted by Laban at 10:08 am

Is that rara avis - a BBC TV children's presenter who doesn't do cocaine.
Posted by Laban at 9:08 pm 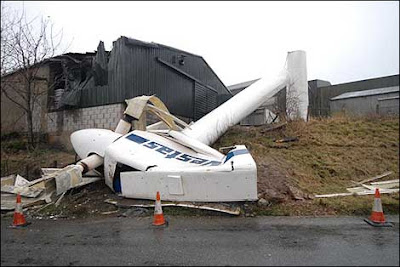 Investigations are under way to determine what caused the 100-ft steel structure near Hesket Newmarket to crash to the ground. The British Wind Energy Association, which represents 98 per cent of UK wind energy firms, will be directly involved and has pledged to act on any potential issues arising. The turbine, thought to weigh around 11 tonnes, has been helping to produce energy to power J Stobart & Sons animal feed mill at Newlands for the last 19 years. When it was installed it was only the second privately-owned wind turbine in the country. But it collapsed, narrowly missing a country road, at around 11.30am last Friday while the plant was operating. No-one was hurt.

The British Wind Energy Association says last Friday’s collapse appears to be the first in its 29-year history where foul play is not involved.

How many turbines have been brought down by foul play then ?

And the BBC story contained the following :

The Health and Safety Executive said it would not investigate the incident as no-one was hurt.

Is that correct ? No one hurt = no problem ? Though it appears to have fallen through a factory roof and inches from a road ?


UPDATE - the Danes do this so much better. Take a look at THIS.
Posted by Laban at 8:52 pm 4 comments:
Labels: climate

Only if you've a hardened heart, mind. What kind of person could get a smile out of this tragic headline ?

"Joey Barton to remain in custody"

A couple of weeks back Sam Tarran reported on the vandalism of the Christmas crib in the city of Worcester - for the third successive year. Amazingly, the drunken perpetrator, already on bail for two assault charges, was actually remanded until January 11th.

Alas, it was just too good to be true.

A teenager who spent Christmas in prison after stealing and damaging nativity figurines outside the Guildhall will be home for New Year. Christopher Geisler was remanded in custody last week after District Judge Bruce Morgan said he could not understand why anybody would commit such an offence. Today 18-year-old Geisler, who had admitted theft and criminal damage at an earlier hearing, appeared in the city's Magistrates Court to answer questions about the offences. He was released from custody and granted bail, on condition he resides at his home in Leopard Road, Newtown, reports to Castle Street police station in Worcester between 5pm and 6pm every Thursday, and attends a probation appointment.

UPDATE - and the Barton news was also too good to be true. After all, you get bail for suspicion of murder.
Posted by Laban at 1:42 pm
Labels: tough on crime

Reckless or repeated breaches of data security should become a criminal offence, a committee of MPs has said. Currently, government departments cannot be held criminally responsible for data protection breaches. But a report (pdf) on the "truly shocking" loss of 25m people's personal details by HM Revenue and Customs, the Commons justice committee demands tougher laws. The government welcomed the report and said it was considering measures to toughen up the Data Protection Act.

So the Government will fine itself. Brilliant. Government by signifier again. I suppose the money could come from the relevant departmental budget - but what good would that do except presumably reduce the effectiveness (if any) of said department ? It's like fining Network Rail for skimping on maintenance - thus leaving less money for maintenance.

UPDATE - David Cameron takes another leaf from the Nu Labour textbook. He'll soon have more of it than they have. This is a man who understands gesture politics as well as anyone.

David Cameron has defended his proposal to penalise hospitals for each patient who picks up an infection. In a speech, he said English hospitals should lose part of their tariff for each patient if that person contracted MRSA or Clostridium difficile. But the British Medical Association said it would put hospitals off treating the most vulnerable patients. Mr Cameron told the BBC "payment by results" was the best way to ensure NHS staff prioritised infection control.

Posted by Laban at 1:16 pm
Labels: Government by signifier, the contradictions inherent in the system

Meet The New Year - Same As The Old Year ?

Apologies. Family commitments and all that. Thank the Lord that Ross and the Dumb One still have their shoulders to the wheel. The news is still not good, optimism not too high - but "say not the struggle naught availeth".

Best wishes to all readers and fellow bloggers - especially the ones I agree with !

May we all come through safe and with honour !
Posted by Laban at 11:52 pm
Newer Posts Older Posts Home
Subscribe to: Posts (Atom)