He's Got Bacon and Eggs Tattooed On His Legs

A man has had a tattoo of a full breakfast created on his head after a plea for a volunteer.

Volunteer Dayne Gilbey, 19, from Coventry, said he wanted to take part in something different. 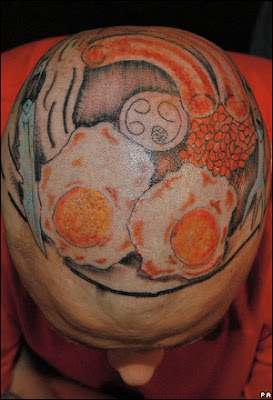 Mr Gilbey, who already has four tattoos, said: "My friends and family keep asking me why I'm doing this.

"For me it's just something different which has never been done before.

"My mum is really unhappy about it and threatened to throw me out but I don't think she'll go through with it."

Mr Gilbey seems to me like a pretty good argument for raising the voting age to 21. His poor mother.

I listened to a Radio Wales interview with the tattooist on the drive home.

"What kind of person would have a plate of food tattooed on their head ?"

"Someone who was unhinged, basically. But I'm his tattooist, not his social worker".

(The title comes from the old music hall song 'Timothy' - as revived by the very wonderful Cosmotheka)
Posted by Laban at 7:30 pm

Dr. Theodore Dalrymple (nom de plume of dr. Anthony Daniels) while working as a pschiatrist in a Birmingham prison observed a link between tattoos and criminality in white men (or in the case of black men, criminality and good teeth). He has written a couple of witty articles on the subject.

But what I really cannot understand for the life of me is why women are adopting this form of so-called adornment. In summer I often play "count the tattoos," and the number of women that have these awful things is frightening. In the States there's a wonderful term for tattoos on women - "tramp stamp."

Am I being morally-judgemental? After all shouldn't a person be free to do what he/she likes with his/her body?

To a chap, tattoos are a useful shorthand which indicate potential sexual availability - just as many years back my mates reckoned that a girl who smoked was more likely ...

After all shouldn't a person be free to do what he/she likes with his/her body?

I'd say, "of course" but then don't act all outraged when people don't necessarily like what you done:

Webcor team management was at pains to stress that none of them had a personal problem with Clinger's new look, but it didn't match the image they wanted the team to project. Sponsorship for cycling teams doesn't exactly fall out of the trees and management was also worried that a facially-tattooed rider might deter sponsors.

Should I out the blogger with the Prince Albert I wonder?

David Clinger - What a pratt

"in the case of black men, criminality and good teeth"

Prison doctor Anthony Daniels wrote about the underside of British society using the nomme de guerre of Theodore Dalrymple for years in The Speccie. He seems to have left under mysterious circumstances, like Mark Steyn. Anyway lives in my old village in the Languedoc now and writes for City Journal.

I didn't know 'tramp stamp' was American. Anyway, slag tag is definitely British and I prefer it because the two hard gs add a punchiness.

You're right, "slag tag," has a certain kick to it.