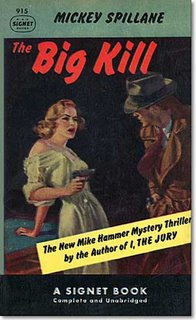 It was one of those nights when the sky came down and wrapped itself around the world. The rain clawed at the windows of the bar like an angry cat and tried to sneak in every time some drunk lurched in the door ...


Fox News : "He was a quintessential Cold War writer, an unconditional believer in good and evil. He was also a rare political conservative in the book world. Communists were villains in his work and liberals took some hits as well. He was not above using crude racial and sexual stereotypes.

Viewed by some as a precursor to Clint Eastwood's Dirty Harry, Spillane's Hammer was a loner contemptuous of the "tedious process" of the jury system, choosing instead to enforce the law on his own murderous terms. His novels were attacked for their violence and vigilantism— one critic said "I, the Jury" belonged in "Gestapo training school" — but some defended them as the most shameless kind of pleasure.

"Spillane is like eating takeout fried chicken: so much fun to consume, but you can feel those lowlife grease-induced zits rising before you've finished the first drumstick," Sally Eckhoff wrote in the liberal weekly The Village Voice."

Alex Cox on Kiss Me Deadly : "the roughest, least compromising film noir of them all"

"Those big-shot writers could never dig the fact that there are more salted peanuts consumed than caviar."

"I have no fans. You know what I got? Customers. And customers are your friends." 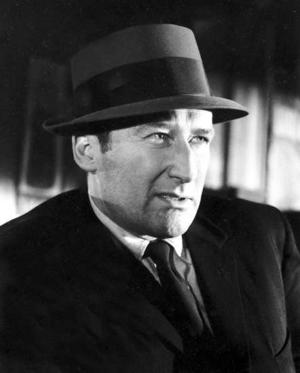 "I'm the most translated writer in the world, behind Lenin, Tolstoy, Gorki and Jules Verne. And they're all dead..."

Unofficial site here.
Posted by Laban at 12:08 am

I bought 'I, The Jury' in my early teens from a Popular Book Centre in Shepherds Bush. These seedy shops used to dot London, windows full of lurid magazine covers for the likes of 'True Detective'.

'I, The Jury' was definitely the exemplar of what back-blurb writers then called 'two-fisted tales'.