If you've not got broadband, hit the 'back' button now.


When I was 11 or 12, I knew every Brit and American fighter jet off by heart, having studied the Observer's Book of Aircraft and the like. Lightnings, Hunters, Sea Vixens, Buccaneers, Phantoms, Starfighters ...

I think this is an F18 Hornet.

Whatever it is, it's damn noisy when he wellies it off the runway.


Hang on a min - what's that hiding behind him ? That tailplane looks familiar ... 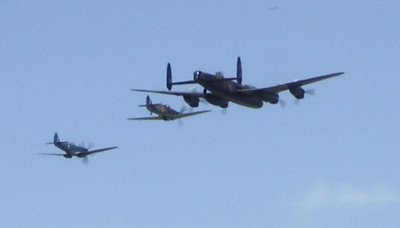 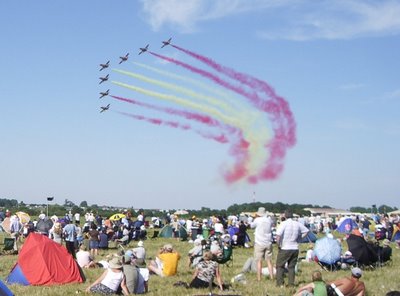 Viva Espana ! And don't mention the War on Terror !

OK, which nation fitted out a Hercules with a samba sound system ? Featured dancing aircrew ? And offered refreshments to visitors ? Especially pretty ones ?

I suppose, as with Argentina, that any nation producing top Formula One drivers will also have some top pilots. 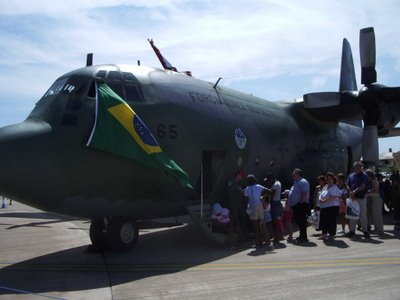 Did you know that the Brazilian Air Force fought in WW2, flying P47 Thunderbolt sorties in Italy ? I didn't.

We watched the presentations of the Flying Scholarships For The Disabled. Moving stuff.


The first ever UK visit by the Pakistan Air Force - a 'thank you' for the international air effort.

US helicopters flew more than 3,300 sorties delivering relief supplies to the disaster area and transported over 15,000 people, including around 4,000 needing medical attention. An additional 250 US military and civilian cargo airlift flights delivered in excess of 7,000 tons of medical supplies, food, shelter material, blankets, and rescue equipment to Pakistan.

All part of that global war on Muslims I read so much about in the Guardian ... 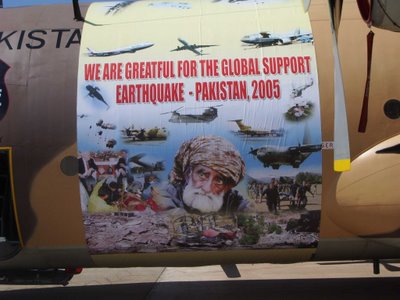