Or plain old wanton unpleasantness ? We'll let you be the judge.

In related BBC reporting, this story - of some obnoxious, ill-mannered natives - featured on the BBC News England page on Monday 3rd and Tuesday 4th. 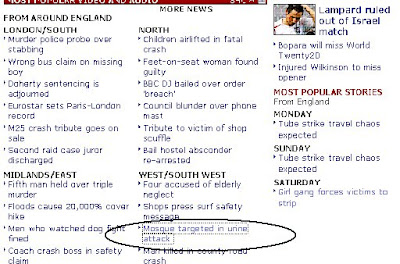 Strangely, this story - of some obnoxious, predatory non-natives, never made the headlines at all.

Now I'm not at all keen on people who urinate on other people's belongings while they're at worship. It's the kind of offence the stocks were made for. But I still think the gang-rape of a lost 12 year old is a more significant crime. The BBC obviously don't.

(Btw, a few months back I remember reading of a case where some guys in Stoke on Trent harassed various families, telling them they were going to be killed by Al Quaeda. It never made national news although I think the bad guys were jailed - it was in a Stoke local paper. Anyone got a link ?)
Posted by Laban at 10:30 pm
Labels: BBC bias, culture, tough on crime

-
6 years is not long enough, he'd be out in less than 3, no?
How long is long enough do you think Laban? easy to say burn them (as some people will) but thats not gonna happen, I'd settle for about 25 years, that would at least be some kind of deterrent. 3 years is not, some would accept the risk of that.

I'd settle for about 25 years

Well that's not going to happen unless something changes either, so why aim for small changes? Aim for great changes.