Tony Sewell (who now has a website) in a bizarre piece on Condoleezza and sexual politics.

Some black commentators have described the relationship between her and George Bush as slave master and his mistress.

Perversely, these commentators think that because they would never want to sleep with her, then their male competitor with a small penis – the white man – would show interest. It tells us more about the teller than the tale. 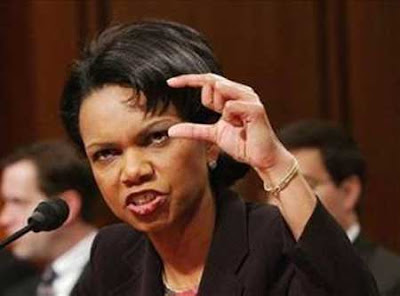 Black men may well feel that the people who seem to have power over them are white men and black women. Not only do they have more autonomy but are they conspiring together against the black man?


I see. Nothing like judging a top State functionary by their sexual warmth. J-Lo for the State Department ?

There is no sex from Condoleezza. She is somewhere between Bush’s nanny and another one of his drinking chums with a skirt.

It would be easier to deal with Ms Rice as a helpless victim oppressed by a bunch of white bigots. The problem is that she’s just as bigoted as her boss. She isn’t someone’s lackey but was driving foreign policy from the front.


At least he acknowledges that she's nobody's puppet. And for the record, I think she's delightful. If she's not partnered I'm sure it's not for want of offers. Perhaps she's choosy. What do you think ? Hot or not ?

Tony Sewell takes as his primary area of concern the issues facing black schoolboys and young men. He frequently bemoans the absence of suitable role models for them.

On the other hand, black (and Indian) women in the UK already earn more than their white counterparts. Condi is a fantastic role model, of the sort we just don't have in the UK. No Colin Powells either. You don't help black boys by knocking black girls.


Hat-tip to the usual site, to whom I'm also grateful for this story.
Posted by Laban at 11:31 am