When Dewsbury's Hammaad Munshi, "Britain's youngest terrorist" (do I sense the genesis of a new reality TV show, perhaps on Al-Jazeera - "Britain's Got Bomb-Making Talent" ?) was convicted of terrorist offences in August, I wondered if he was the same chap who'd featured in this story a year ago. I commented :

The age is right. I may be wrong, but I reckon Mr Munshi is the same guy. How many more teenagers in Dewsbury have been charged under the Terrorism Act 2000 ? I'd like to hope it was only one more, but if anyone knows different please tell me.

Well, it was two separate cases. Are these guys linked to the Ravy Terror Squad ?

Two West Yorkshire school boys cooked up a plot to blow up a BNP building, Leeds Crown Court heard. Dabeer Hussain and Waris Ali, now both 18 and from the Ravensthorpe area of Dewsbury are accused of possessing a terrorism manual called the Anarchists Cookbook on their computers and of discussing a plan to spy on and blow up a building connected to the far right politicals group, British National Party, the jury at heard.

Sounds sinister. What exactly did they do ?

Ali, of Dearnley Street, Ravensthorpe, Dewsbury is also accused of downloading a copy of the Proper Anarchists Cookbook onto his computer and possessing small amounts of potassium nitrate and calcium chloride, the court heard.

Both chemicals can be used in the preparation of a bomb, the court heard.

Well, you can certainly make a bang with potassium nitrate, finely ground charcoal and sulphur - aka gunpowder, but calcium chloride ? If these guys know how to make explosives out of that, GCSE chemistry is less dumbed-down than I thought. Not only that, but I'm worried - as there are a couple of pounds of the closely-related sodium chloride in our kitchen - and a couple of hundredweight of the stuff in a big yellow bin at the roadside. 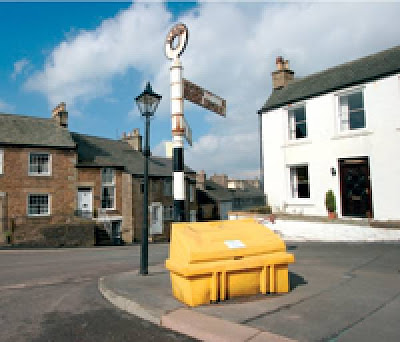 At the time of the offences between May 2006 and September 2007 Ali was still 15, and Hussain of Clarkson Street, Ravensthorpe was just 16.

As I've said before, I'm a little - more than a little - concerned about the legislation under which you can be charged with possessing items "likely to be of use for terrorism" - a category so vague and wide-reaching as to render pretty much the entire UK population liable to arrest. A road map ? A Stanley knife ? Every arable farmer with a bag of ammonium nitrate is a potential mass-murderer. Perhaps they should be taken into preventive custody.

Motivation is all. Possessing items "likely to be of use for terrorism" is such a broad concept that in practice the 'likeliness' is decided not by what the items are, but what the accused may have wanted to do with them. The 9/11 murderers used Stanley knives and Microsoft Flight Simulator, but those of us who possess both are unlikely to get arrested at 5 am unless we start posting on jihadi websites while simultaneously researching flight deck door locking mechanisms and when the stewards bring the pilots coffee.

Similarly Omar Altimimi got nine years despite the police admitting that "we will never know exactly what Altimimi was preparing to do". He had built up a library of terror-related literature - but on those grounds Professor Paul Wilkinson should be inside.

You see what I mean ? Young men have enjoyed making things go bang ever since gunpowder was discovered. I'm sure these two are very naughty boys - but does possession of information about making explosives, plus a very small quantity of an oxidiser, make these young men terrorists ?

Re calcium chloride. You could probably make a decent coke/mento-style "bomb" where the "target" gets a spray of hot brine rather than cold gunk. Still agree not a good reason to make its possession an offence.

(OT: any reason why you've been silent over the recent transmission of the BBC's Tess. Not a bad effort IMHO.)