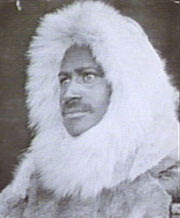 Boys brought up in the Fifties knew all about explorers and adventurers. Hillary and Tensing, Scott, Amundsen, Shackleton, Peary, Fawcett.

But I had no idea that alongside Peary on the first trip to the North Pole was a black American, Matthew Henson.

According to this National Geographic portrait, the notoriously difficult Peary wasn't at all happy at the idea that Henson might have been first there.

On April 6, 1909, Henson arrived at Camp Jesup, 89°47', 45 minutes ahead of Peary, concluding by dead reckoning that he had reached the Pole. Henson greeted Peary, "I think I'm the first man to sit on top of the world."

I picked this story up because another Hillary, 75 year old Barbara Hillary has just become the first black woman to reach the North Pole, skiing from Norway. Admittedly, it's not like the old days. You pay about $21,000 and get a helicopter back from the Pole - not an option Scott could avail himself of. 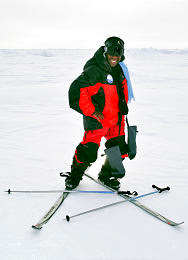 In the early 50s (while Henson was still alive), I read an article in Readers Digest about Matthew Henson, his connection with Peary and the expedition to the North Pole. Although, as I faintly recall, the article bigged up the admiral, readers would have been left with (more than) a suspicion that the first man to the North Pole was black.

I saw a TV programme about Henson a few years ago. Peary was indeed a bit of a racist megalomaniac!!

The only downside is from those cycnics who suspect that Peary cooked the books and that they didn't get there at all.

It never occurred to me - until your comment - that this might the case. More to the point, I assume there is (and can be) no cast iron proof that Peary (or Henson) did, in fact, get there.

umbongo, I can only wave a hand and allude to something I read somewhere some decades ago. Good enough for the Gurdniaa, I suppose, but a bit feeble for here.

I continue to marvel at Google, umbongo. Here's a rather lowering discussion of the business:-
http://members.tripod.com/PolarFlight/controversy2.htm

Triumph. And if you read that piece to the very end, it seems about to cast doubt on Byrd's later flight over the Pole too.

If you want to write an URL do it like this:
<a href="http://www.link.com/page.htm">My snappy text<\a>

The result is this:
Polar Flight Controversy.