Riot police fired tear gas at stone-throwing protesters gathered in central Paris today to demonstrate against the presidential election victory of right-winger Nicolas Sarkozy, an AFP journalist said. The clashes took place on the Place de la Bastille where about 5,000 supporters of the defeated Socialist candidate Segolene Royal had gone to await the election results. Up to 300 rioters, some of whom were masked, made running attacks on riot police who took up positions at the entrance to boulevards leading onto the square. Earlier a small crowd of protesters, brandishing black and red anarchist flags, set fire to an effigy of Sarkozy in the square before tearing it limb from limb and then stamping on it.

Be fair though - these are traditional French Leftist rioters (the kind who say the Right are 'full of hate'), not 'racaille'. I imagine a lot of police will be on duty tonight. 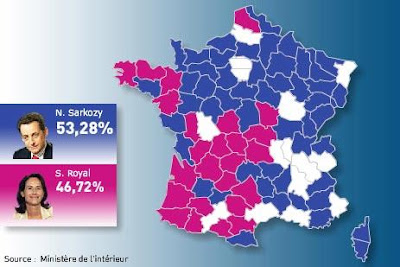 UPDATE - strange. The graphic (from Le Monde) seems to show Sarkozy as winner in the industrial North - which I'm sure the Guardian describes as the socialist heartland - and the east, while Royal seems to be ahead in ... well, the touristy, less vibrant bits - Brittany, Bordeaux, the Southwest.

Have I got the reactions correct ? (O-level French)

The lovely Sego said she will continue to wear the same outfits.

French Sophistication ain’t what it used to be…!

The BBC are absolutely gutted about this. They are already spinning every anarchist riot in France as being his fault.

Sarko's the man to make the French economy zing and to bring down down youth unemployment among inner-city 'youths' (something the Socialists - whose sweep it under the carpet approach to confronting problems - could never achieve).

I always find the devotion to democracy of the left so touching. When things don't go your way, you have the absolute human right to go and bash people up and destroy property to demonstrate your disapproval of other people's voting habits.

They should make the best of this lull, because once Sarkozy is in the saddle, I guarantee you the Gendarmes and the military will be instructed to throw away the kid gloves. When explaining the facts of life to the life, truncheons are more trenchant. Also, it's more fun to watch them getting their heads bashed in.

Anonymous 9:54 - Yes, too distressing, isn't it, that the Beeb is devastated? Tee hee. All the posters with lots of Agree votes attached to their comments are cheering the right.

I'll bet they don't approve over at the UN either. So sad.

It seems that the Socialist stronghold in France is Celtic Britanny. Vive la difference, or not as the case may be.

> It seems that the Socialist stronghold in France is Celtic Britanny.

All the non-socialists have left Britanny for the UK.