Trades Unions - Then And Now

Today the Unison union campaigns for "undocumented migrants" - illegal immigrants - to be given British citizenship. Effectively they're campaigning for open borders, despite the effects of mass immigration on its members wages.

"The availability of migrant labour had stopped pay settlements picking up more sharply in response to higher inflation ..."

It wasn't always like that. Seventy years ago Government and unions were very cautious about allowing even the most deserving of refugees to compete for jobs with the indigenous people.

"They will not be allowed to take the jobs of British workers here or receive unemployment benefit. The Trades Unions are satisfied about that." 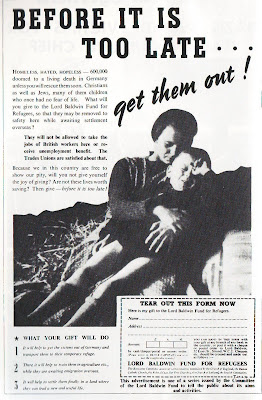 600,000 is about the gross inward immigration for a single year now. About 30,000 German (mostly Jewish) refugees came, including the parents of quite a few friends, over about six years between 1933 and 1939. Many of those who couldn't get out didn't survive.

Even the generous reponse of the British public to the Baldwin appeal raised the hackles of those who thought charity should begin at home. If people are willing to give to strangers, they asked, what about our own unemployed ? 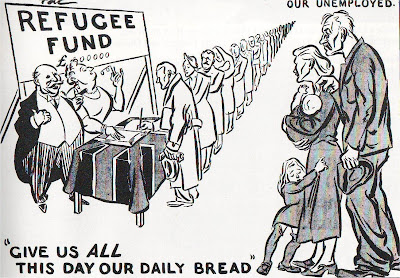 I've just been reading a bound volume of "The Windsor Magazine" for 1901/02. It contains a pair of articles by Ernest Williams entitled "Our National Peril". In the first he charts the decline of English agriculture, showing that we imported more food and grew less of our own than in say, 1870, becoming increasingly dependent on imported wheat and flour to feed our growing population. In the second he discusses the flight from the country to the urban slum of "The Death Seekers" and then discusses "Our National Loss". This is illustrated by a sad little picture showing able-bodied but dejected Englishmen and their families taking ship for abroad, while their places are being filled by a motley crew thronging another gangplank - although they're rather sinister and shadowy, it's clear enough the various immigrants are clearly sporting turbans, long pigtails, and it's to be feared that the artist has shown a few dusky complexions and hooky noses... One sentence stands out: "Since our recruiting sergeants have had to draw more and more largely upon the towns there has been a continuous diminution in the Army's physical standard: and the puny appearance of many of our soldiers has now become a common them of melancholy jocularity".
And then I got out Colonel Lane's "The Alien Menace" I won't take up space by quoting from this amazing book, but I'll merely say, if the English didn't heed Williams, if they ignored Lane, if they shouted down Enoch Powell, then they'd bettr bloody well sit up - those ythat are left - and listen to Nick Griffin, otherwise there won't BE any Englishmen left in a couple of generations, and they will have assisted at their own genocide...

But they didn't ignore Lane. The Aliens Act was passed in 1904 (?) which effectively closed the UK's genuinely open borders. The British Nationality Act of 1946 (or thereabouts) opened them again to any citizen of the Empire and Commonwealth. The EU regulations together with persistently rogue interpretations of the Human Rights Act dismantled any border control.

That genuine asylum seekers were refused entry here in the 1930s is shameful. Especially since it appears that most of those asylum seekers had no practical alternative to coming here. I would guess that the asylum seekers of today have plenty of alternatives. The 1930s refugees came from Germany (a short trip by boat/rail). Many of today's refugees come from Africa and the Balkans: asylum in other parts of the EU (even Africa) is available (but, economically, not as generous). I wonder why they end up here or, more to the point, why we allow them to end up here.

Slightly off topic but you might find this interesting:

At the core of NUPE is COHSE and NUPE the two left-wing loon unions that caused the Winter of Discontent......noone expects anything sensible out of them

Asylum should be funded through genuine charity, not by extortion.

If the money isn't freely given then sorry.

Dear Umbongo: Lane postdates the 1904 Act. My edition is the fifth of 1934. His numerous quotations from the contemporary press could, given the change in idiom,have been written today. From the Daily Mail of 8/05/1928 he quotes "A number of Aliens in various parts of the country are believed to have had their names entered upon the registration lists of parliamentary voters - certain parts of Lobdon, including Poplar, Whitechapel and Stepney are believed to have the greatest number of unnaturalised Aliens on the voting lists."
Hee is Lane in his own voice: "The decision of the Socialist Minister of Labour, Mr. Tom Shaw, in February, 1924, to extend the payment of the dole to Aliens gave a great impetus to the invasion of Englandbu numbers of work-shy and anarchical people. Many of these individuals (according to the Daily Mail of 2 December, 1924) had situations found for them by friends here, but they continuied to work only until they got sufficient stamps on their insurance cards to claim the benefit, after which they lived on the dole."
Lane spotlights various aliens who'd risen to positions of responsibility here, such as the egregious Trebich Lincoln.
He explains the now well-known trick of surveying a churchyard to pick out the graves of those who had died at an early age, which is followed up by ordering copies of birth certificates, which are then purchased by apprpriately-aged visitors as a step towards naturalisation...if the borders were truly closed by the 1904 Act, how did Lane come by sufficient cases to fill out a book of over 240 pages?

My mistake re date of publication of Lane's book: even so, I don't know how the Aliens Act was evaded. I suspect though that a number of people entered as tourists and stayed. I have no idea how immigration controls worked at the time but I imagine that if you turned up in Dover looking vaguely respectable saying you were here on a week's holiday, I can't believe there would have been any real obstacle to entry.

Whatever happened in the 20s, the large turn of the century immigrations were halted by the Aliens Act. There was no statutory relaxation until after WW2: what various politicians did in the interim re the dole might have attracted immigration but economic immigration itself was not, I believe, a big feature of the interwar years. Refugees coming here seeking asylum post-1933 were a different matter: that most of these refugees were Jews provoked a rather nasty and hostile reaction to their arrival.

I've never read Lane's book although 30 seconds googling shows that it is quoted approvingly when somebody wants a pop at the Jews. I can understand that anti-Jewish and anti-immigrant feelings were conflated in the first half of the 20th century in the UK. After all the last great immigration before that of the late 50s was the Jewish immigration from eastern Europe in the late 19th century. However, as I understand it, at the time the British were never consistently lied to about the scale of late 19th century immigration and its effects in one or two particular areas (eg London's East End). Contrast that with the crap we are fed today about the large scale benefits of large scale immigration to our society: we are told constantly of the wonders of "diversity", the enviable "vibrancy" of our inner cities, the huge (but in fact non-existent) economic benefits etc etc. Unfortunately, it will take more than Cameron staying overnight in the family home of a prosperous Muslim businessman to prove that, after all, there's nothing to worry about. However, I don't believe we require overt (or even covert) racialist propaganda to illustrate what has happened and is happening to the UK. Migration Watch, for instance, provides disinterested information and statistics without a racialist agenda but which highlight the effects of the "open border" policy.

Bill Fishman wrote an excellent book, called East-End 1888, which much of the same ground. Not all of the press was hostile to Jews.

And, of course, the Jews were not hostile to Britain!!!