... the companies reached their objective with a combined strength of 40, plus 30 wounded; the Gurkhas were pinned down, also with heavy casualties, and there was little food or water. As the only medic present, and with no resources but a first aid haversack containing some bandages, a bit of morphia and scissors, Lance-Corporal Hazle became, in effect, the regimental medical officer, according to his regiment's history.

Working in cramped conditions under constant mortar fire and artillery bombardment, as the empty canisters from smoke bombs caused further casualties as they fell among them, Hazle fearlessly exposed himself to continual fire over six days, dressing wounds, and carrying out an amputation.

He was a stretcher bearer, not a qualified medic. And that was "Nutty" Hazle's second DCM. The first was awarded for continuing to treat wounded of the 5th Indian Division despite having half his face shot away.

Picture from the Times obit. 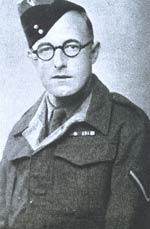 There's a line in Solzhenitsyn's novel August 1914, in which the author regrets that so few photographs exist of the conscripts. I paraphrase :

"There are no photographs of them, and this is all the more regrettable because since then the composition of our nation has changed, faces have changed and no lens will ever rediscover those honest, trusting eyes, those placid, bearded faces, those relaxed and unselfish expressions. Our whole national character has changed since then."

The Brits of 1939 weren't at all like Russian peasants. But I know what he meant, and feel the same regret at the passing of the last heroic generation of Britons, none of whom would ever have described themselves as such.
Posted by Laban at 12:06 am

That post broke my heart. The strong sense of belonging in our own country, the trust between us, the humour between us, the hundreds of years of shared history and folk tales, has been intentionally destroyed by the importation of the adherents of an alien, destructive creed who have nothing in common with us, driving a stake through the heart of our country. It is spiritual genocide on a massive scale.

"The strong sense of belonging in our own country, the trust between us, the humour between us, the hundreds of years of shared history and folk tales" - Stirring stuff, if I were to post on the forum set up by my local MP (a Tory!) I would be denounced as a racist. As Ive been informed by the denizens there that we are no more valid citizens than people who arrived six months ago.

The four grandfathers of my wife and myself all fought in WW1: one of my wife's grandfathers died on in July 1916 at the Somme. The other 3, thank God, survived unscathed. They never talked about their time in the army but they must have seen things and experienced things beyond our imagination.

My father and his two brothers fought in WW2. None of them talked to me about the war except once: one of my uncles was a sergeant with a recce battalion attached to the 51st Highland Division (although he was born and bred in London - go figga). All he said was "I shat bricks for 4 years": this was a man who never swore.

None of my family regarded themselves as heroes - nor did they want anyone else to regard them as such. They were just doing a job which they thought had to be done and they were there to do it. Would we do the same? Or, more to the point, what have we got to defend? A multi culti non-society "educated" to hate its past with a government in thrall to followers of a medieval cult who arrived here yesterday. The England my family - and all the other English families created - was a miracle of freedom, self-discipline and self-respect. Look at it now.

Mr Hazle looks utterly normal - in fact, he would be an object of derision for today's fashionable opinion, yet he did things that are literally fantastic to your average Briton today.

Would our Mr average (and Mrs/Miss Averages) be capable of the same extraordinary efforts?

That sounds like the forum run by my Tory MP. Who is your MP?

The generation that came back wanted to forget and brought up their children unknowing. They would not talk, would not discuss, but simply buried their experiences in mundane ordinariness.

Their children grew up ignorant of what their fathers had done, seen, or experienced.....

i had the pleasure of meeting one of that "heroic generation" in my local pub recently. a grandfather of one of my neighbours, who fought in Arnhem in '44.

didnt know the guy - we just struck up a conversation by chance over a few beers.

i have to say, it was one of the most interesting evenings of my entire life. his utter hatred of the Germans and fascism was still palpable and very very real. it was like going back to 1944 and seeing the world through his eyes.

his love of England and liberty was complete and absolute. but he didnt regard himself as a hero. just one of many who were doing their job.

however , I just saw a hero, in the true sense of the word.a rock upon whom MY freedoms were won. needless to say, he didnt pay for a single pint that night.

lesson is - if you know of an older chap who fought in the war, go for that pint with him - because the years are going by right now, and you not get a second chance to hear his story.

"his utter hatred of the Germans and fascism was still palpable"

Recently I went to the Funeral of one of my uncles. He was my dad's older brother. He was captured in Greece in '41 and spent the war in a POW camp. I last spoke to him 5 years ago. He said "never believe anything you see in the films, it wasn't like that at all". He told his amazing story of how he was captured, escaped, and recaptured. He said they got on well with the Germans and became friends with the prison camp guards. He said he didn't have much to eat but neither did the Germans.

My mum and dad were both 14 in 1940, Londoners, who watched the Battle of Britain over thier heads. Later on my mother used to walk a dog up by Alexander Palace where the allied bombers used to gather in the sky, what seemed to her like thousands of aeroplanes filling the sky before flying off to Germany. She told me many times how sorry she felt for the poor the poor Germans on the receiving end of that - despite twice narrowly escaping death from v1 rockets on 2 occasions.

My dad used to tell a very moving story of how, when he was briefly in Germany just after the war, him and the squaddies with him hardly ate because they gave so much of thier rations to starving German kids.

I could go on with more stories from my family and others I have have met, but I have never encountered hatred for the Germans. What I picked up is they respected the German soldiers and felt compassion for the civilians.

I am not doubting your story, but from my experience, all this hatred of the Germsn is a bit of a myth.

Sorry about that, but I find the notion that the WWII generation were passionately fighting some sort of crusade against evil fascism for which they would willing give thier lives somewhat irritating.

I sometimes wonder if it is people attempting to rewrite history to suit their own political viewpoint.

Yes they were heroes, who did extraordinary things, but mostly it seems to me, from wht I have been told, they did what they had to do, but they didn't want to be there and were delighted when it was all over and they could go home again.

I don't think every soldier hated the Germans, though a lot did. I remember a friend not being allowed on the school trip (by his father) because it was to Garmisch.

The soldiers DID hate the Japanese though, and with good reason.

not being allowed on the school trip (by his father) because it was to Garmisch.

Voyager is wrong. Not everyone who returned from the war didn't talk about it. After demob and a few years
out my father rejoined the forces at the time of Korea and served into the late 80s. He had no qualms about telling us kids what he did during the war (Bomber Command) and told us he had no qualms about what he did and would do it again if necessary. Of course it was different being brought up a forces brat. Every day we saw men of all ages wearing their medal brevets (until uniform changes meant they no longer wore them, more's the pity).

"I am not doubting your story, but from my experience, all this hatred of the Germsn is a bit of a myth.

dont get me wrong - i was merely recalling my experience of talking to a single Arnhem veteran. of course, it would be foolish to over generalise.

and indeed, the Paras were tough and hardened, and they ended up fighting the Waffen S.S. face to face in Arnhem. one can only imagine the sheer brutality of that battle. i can barely imagine it myself...

in any case, a heroic generation. i have no doubt about it.

Yeah it did occur to me some time after making those posts that you were talking to a para.

My dad's stories were more along the lines of Spike Milligan's book 'Adolf Hitler, My Part In His Downfall'.

Interactions with the Germans were portrayed in the spirit of Fritz and Tommy playing football in nomans land Christmas 1914.

My mum astonished me by telling a story (after he died) of how he was nearly killed and another British soldier was killed right next to him. I said I thought I had heard all his war stories. She said, he didn't like to talk about those ones.

He would, however, practically spit with fury at mention of the Japanese (as Laban touches on) even though he wasn't in that theatre.

This isn't directed at you, but I strongly resent the hollywoodization of our history and am perhaps a little touchy about it.

Voyager is wrong. Not everyone who returned from the war didn't talk about it. After demob and a few years out my father

Yes I am wrong about your father, but not about people I know. I never heard about what it was like at Caen, at Falaise, in Belsen, until a lot later. Nor did I hear about life at Cassino until later; and it took a long time before stories of how the Rumanian guards at Belsen were dealt with was mentioned.

I suppose some people have fewer nightmares than others, but Voyager is wrong. said the anonymous one.