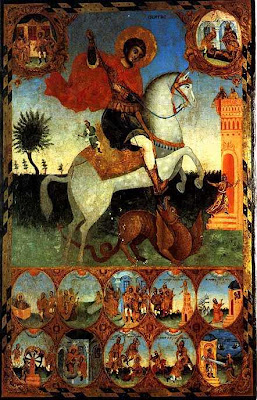 Icon from Church of St. George in the village of Dripchevo, Bulgaria.


The reason assigned for this admission of foreigners into our service, is the want of men; but if there be any truth in that main principle of Mr. Malthus's admirable "Essay on Population," I apprehend it cannot be controverted, and hope that I have not misunderstood it—That population depends upon food; that, in long peopled-countries, it is only restrained from increasing, by the incapacity of the country to produce or procure a greater quantity of food: it follows that, if our country has sufficient food to give to foreigners, it has the same to give to Englishmen, and it would surely be better to give it to them, since they must be attached, by opinion, to their country; since they are, in every point, more industrious subjects, more courageous sailors, and better men; while the others have nothing to attach them to our country, they are destitute of legal principles for fighting in our defence, and have no motives for virtue but fear ...

Perhaps it may be said, that our want of these men is immediate, and that Englishmen would require to be born and bred up; but this, I conceive, furnishes the strongest objections that can be urged against the admission of foreigners into any part of our country; for, if they were not to eat the food which our labours procure, it would have been shared amongst Englishmen; consequently, a greater number than now exist would have been reared to manhood. Now, as the general repressing causes of population are vice and misery, for even in our country moral restraint represses but a small part of it, this admission of foreigners has caused a greater portion of vice and misery than would otherwise have existed in our country. As the end of legislation, and entrusting power to any men, is to promote the happiness and morality of all, our rulers, by the encouragement they have given to foreigners, have acted in direct opposition to that end for which they had power entrusted to them.

When the English character is so much superior to every other; when English opinions are so strongly tinctured with the love of liberty, and liberty is so valuable to mankind, true policy would have dictated a prohibition to strangers entering the country ...

(Englishmen with high blood pressure are advised to ignore the atrocity committed at the Telegraph)
Posted by Laban at 7:32 am

I recently heard Billy Bragg on R4. His accent was so comically mockney that I feel sure it's completely assumed, just like Nigel Kennedy's.
(Apparently you can go to elocution classes t' learn yer t' speak proper, like, er, none uv yer 'igh class git stuff, like, know wharrer mean?)
He gave his roots away when he regaled us with an anecdote... from his cleaner! Nuvver glass er champaigne, mate?

Loved the St. George picture! Ill befall the verminous liar Gibbon for dissing him so nastily in "The Decline and Fall of the Roman Empire"!

There was something in the phrasing and construction of the "Naval Discipline" passage that reminded me of Johnson, so I got out that wisest of all English novels, "Rasselas", and would like to subjoin that passage where Imlac, tutor and companion to the discontented Rasselas, Prince of Abyssinia, is telling his own story:

"'From Persia', said the poet, 'I travelled through Syria, and for three years resided in Palestine, where I conversed with great numbers of the northern and western nations of Europe, the nations which are now in possession of all power and all knowledge, whose armies are irresistible, and whose fleets command the remotest parts of the globe. When I compared these men with the natives of our own kingdom and those that surround us, they appeared almost another order of beings. In their countries it is difficult to wish for anything that may not be obtained: a thousand arts, of which we never heard, are continually labouring for their convenience and pleasure; and whatever their own climate has denied them is supplied by their commerce.'
'By what means', said the prince, 'are the Europeans thus powerful ? Or why, since they can so easily visit Asia and Africa for trade or conquest, cannot the Asiatics and Africans invade their coasts, plant colonies in their ports, and give laws to their natural princes? The same wind that carries them back would bring us thither.'
'They are more powerful, Sir, than we,' answered Imlac, 'because they are wiser; knowledge will always predominate over ignorance, as man governs the other animals. But why their knowledge is more than ours, I know not what reason can be given, but the unsearchable will of the Supreme Being....

In enumerating the particular comforts of life we shall find many advantages on the side of the Europeans. They cure wounds and diseases with which we languish and perish. We suffer inclemencies of weather which they can obviate. They have engines for the despatch of many laborious works, which we must perform by manual industry. There is such communication between distant places that one friend can hardly be said to be absent from another. Their policy removes all public inconveniences: they have roads cut through their mountains, and bridges laid upon their rivers. And, if we descend to the privacies of life, their habitations are more commodious, and their possessions are more secure.'
'They are surely happy,' said the prince, 'who have all these conveniences, of which I envy none so much as the facility with which separated friends interchange their thoughts.'
'The Europeans', answered Imlac, 'are less unhappy than we, but they are not happy. Human life is everywhere a state in which much is to be endured, and little to be enjoyed.'"

I suppose that I should now recommend people to read the depressing novel by Jean Raspail, "The Camp of the Saints" which treats of the invasion and destruction of Europe...