Working long hours, hence dashed-off, poorly-researched posts. Getting home 7.30-8ish, when the choice is between the unbearable Front Row on R4 or more football on R5 - so listening again to Radio Wales, which has a different music genre 7-8 each night. Last night was the blues - in which I discovered that John Mayall will be 73 this year.

Scary. When I was at school, the older kids were still into that zone where blues and jazz met - Ray Charles, Etta James, Aretha. We fourteen year olds found that too dull - we were into blues. John Mayall, Fleetwood Mac edition 1, Savoy Brown, Chicken Shack. Blues - the authentic voice of surly white suburban youth. 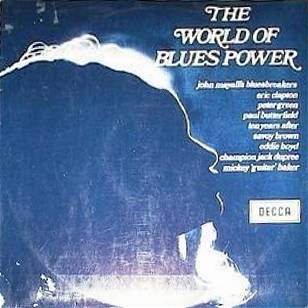 What's that ? Black people played it, too ? We discovered Sonny Terry and Brownie McGhee, BB, John Lee, Elmore James. There was a real live bluesman living in Huddersfield - Champion Jack Dupree. But like the kids who fifteen years later were buying UB40 rather than Dennis Brown, we liked the recycled. Mayall featured wonderful new guitarists like Peter Green and Eric Clapton - chck out 'Stormy Monday a 'So Many Roads' on this - and he never stood still, changing his line-ups from one tour, one record, to the next. I've still got about 11 of his LPs.

His son's a trouper too - I used to go to Gaz's Rockin Blues when I lived in London in the 80s and it's still going.

Where was I ? Old men forget ... ah yes. The radio played a wonderful dub mix of blues sounding strangely ancient and modern. Turned out a couple of people called Tangle Eye took Alan Lomax's field recordings from the 1940s/50s and remixed them. You can buy the result at Amazon. Good stuff.
Posted by Laban at 9:35 pm

Laban,
Thank you for reminding me of Tangle Eye, I was straining to remember the name of that project just the other day!

If you liked that, you might like the soundtrack from The General's Daughter by Carter Burwell. Four of the tracks feature really haunted-sounding atmospheric pre-Blues field recordings remixed with a certain panache.