The BBC can have no 'official' view on devolution, although its culture means in practice support for devolution for everyone except the English (who will be forced into 'regions', funded by the UK (i.e not English) Parliament).

So naturally the opening of the new Welsh Assembly White Elephant is a Good Thing. What Wales needs is more politicians.

So good that the BBC erected large screens in Caernarvon town centre for the cheering throngs to witness this happy event - and on Dydd Dewi Sant as well !

As Caernarfon Online reports, there was plenty of room to watch. Great pictures. 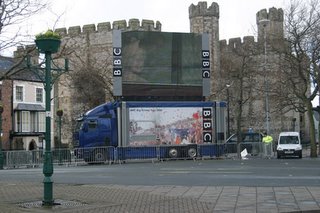 The BBCs commenters point out that protesters in Cardiff outnumbered well-wishers - and this from Barry Field of Nairn seems apposite.

"At least the Welsh only "wasted" £67m if it is seen as wasted. We, the Scots, wasted £450m on our "dome" and, as it is a high maintenance building, the figure will rise very rapidly if the truth is ever let out of the bag."

"Engineers are to carry out a detailed examination of the oak beam that broke free from the ceiling of the Scottish Parliament building. MSPs had to evacuate the debating chamber on Thursday after the 12ft-long beam slipped out its mountings.

The inspection will involve the Health and Safety Executive, the construction manager, the structural engineer and the contractor who built the chamber.

It is not clear when it will be safe for MSPs to return to the chamber."
Posted by Laban at 8:58 am