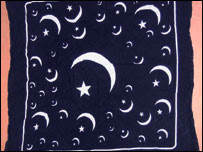 Kriss Donald's murder was headline news on Radio 1 today, some men have just been charged. No mention of how and why he was killed.

Could be HARRY POTTER!

The fact that some homosexuals use the Rosary as a fashion accessory does not mean that they go to Benediction.

mk - well they jolly well should !

As long as it's in Latin of course.