Journalist Eleanor Mills enjoys a day out in London :

At half-term I was on a bus with my five-year-old daughter. She had wanted to see Buckingham Palace, so we saluted the Queen and walked back up The Mall to get a bus home from Trafalgar Square. The bus was packed, around us were a friendly posse of young people of all races, bantering, cracking jokes, smiling. I felt happy - when the capital’s mad melting pot works, it’s great.

Suddenly there was a kerfuffle among the packed-in bodies by the doors. From the shouts, it seemed that a middle-aged white guy had stepped on a young black man’s foot. The bus stopped and as the doors opened, the young guy started punching the older man in the head. He wrestled him off the bus, kicked him to the ground and left him there. Calmly he got back on the bus.

Silence fell. My daughter looked at me anxiously. I hugged her and whispered not to worry, but when I looked up I inadvertently caught the thug’s eye. “What you f****** looking at?” he yelled. I cast my eyes down quickly, glad that there were many bodies rammed in between me and him. No one moved, said or did anything. We all tried, desperately, to mind our own business. The bus continued on. About three stops later he got off. The chatter resumed as if nothing had happened.

You can see how people like Richard Whelan get stabbed to death on buses while everyone looks the other way.

One murder in five is committed by foreign nationals :

Out of 461 people convicted of or charged with homicide in the 12 months up to April last year, 96 were foreign citizens - from 28 different countries (there are more homicides than this, but only 25 out of 43 forces supplied figures - LT).

The findings again highlight Britain's failure to deport foreign criminals, a focus of government attention since the blunder that led to the sacking of Charles Clarke as home secretary in 2006.

Recent murderers have included foreigners who had been convicted of robbery and assault but were allowed to remain in Britain after serving their sentences.

Police chiefs seized on the 2006/7 figures - the last year for which full data are available - to warn that immigration was having a "significant impact" on Britain, and putting forces under rising strain. The information also provides evidence that foreign criminal networks have built up extensive UK operations.

Scotland Yard said half of the organised crime gangs in London were "ethnic" - bound by a common language or homeland. The most common nationalities for foreign killers were Pakistani, Indian and Jamaican.

Foreigners were also more likely to become victims. According to the figures, 15 per cent of those who died were from overseas, even though foreigners account for only six per cent of the British population. In many cases, both victim and killer were from the same immigrant community.

I can't understand it. David Aaronovitch has said that "there is no greater propensity among immigrants towards crime, prostitution and anti-social behaviour than among the population at large". Who am I to believe, Aaro or those lyin' police statisticians ?

Scottish Labour's Wendy Alexander was a loony campus leftie shock horror. I'm surprised the Tories haven't sent enterprising researchers round our major universities to go through back issues of the student papers before now - yet more the records of who proposed what resolution at the student's union. I think they'd find a large number of rattling skeletons.

After Harry's Place cut links and stopped answering emails David T was dismissive of those bloggers who are :

Yet somehow doubts creep in :

When I arrived at the pool, I was told that we could not swim in it until 10.45. The reason is that it was being used for "Muslim Male Swimming". This is apparently so, every Sunday morning. I couldn't quite believe that a swimming pool was really institutionalising both gender AND religious segregation. I asked to speak to the Duty Manager. She told me that, really, Muslim Male Swimming was being laid on at peak time. No, it wasn't just Male Swimming, that happened mostly to be used by Muslim men. There was separate gender segregated swimming that was not religious specific, but on other days. And, apparently, this is a policy insisted on by Hackney Council, which sets the policy for all Hackney pools. 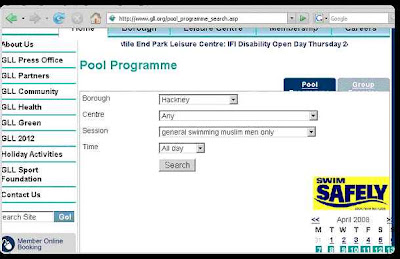 Lastly I posted the other day on the reaction of Swindon Muslims to the conviction of more than a dozen young men for the Wroughton Hammer Attack on a defenceless schoolboy. The victim's parents have now had their say, and I will add that to the same post.
Posted by Laban at 12:21 am
Labels: demography, immigration, the way we live now
Newer Post Older Post Home