The Guardianista and Islam

This is not the kind of thing you'd get at a Catholic primary. I'm presuming the assailants were from the same community, as if any of the "youths with sticks" had been natives, the Islamophobic outrage would have been all over the media (UPDATE - Laban appears to be completely wrong - and the media silence is a mystery to him, unless the terms of trade have changed and they're more worried about reprisals than they used to be. Rather detracts from the first half of the post, doesn't it ? The school is not so far from the Holme Wood estate, which was certainly hideously white twenty year back. Don't know if it's changed).

A fresh appeal for information has been made about a disturbance at a Muslim school in Bradford, during which ten people were injured.

Police were called to the Darul Uloom Dawatul Imaan School in Harry Street at 7pm on Friday, March 7, after an altercation between 30 youths, aged between 11 and 19, some of them carrying sticks. One person suffered a broken arm while others received cuts and bruises. Eight people have been arrested and bailed pending further inquiries.

Anyone with information, in particular who saw a group of youths running along Tong Street near its junction with Wakefield Road or who has found a stick abandoned in their yard or garden, are asked to contact Detective Inspector Noel Devine, of Bradford South CID on 0845 6060606.

Friday night would be the Muslim equivalent of Sunday School - I well remember the cheerful kids in white outside the Woodhead Road madrassa as I strolled down to the pub. Were that at a Christian school, the Guardian and Indie would make hay, Labour MPs would be asking questions in Select Committee, the Today programme would report from outside the school.

What's ominous - and what speaks volumes - is the lack of interest (there's a long history of incidents where violence has been used in battles for control of mosques - and Sikh gurdwaras, too). Look at the media silence over the amazing goings-on at Birmingham Central Mosque. If the Guardian really believed in a multicultural society, why wouldn't they want to know why such things happened - the dynamics of whatever power struggles were taking place, the principal actors and their support bases ?

Why the lack of interest ? Is it that for them the enemy is 'white' Christianity, because it's the traditional religion of Britain ? Is it that they think that reporting such stories will 'fuel racism', so they don't report them ?

I imagine, too, that if Dave Bloggs from the Guardian turned up at the school for an interview, his reception would be cool if not hostile. A few complaints of 'Islamophobia' would be enough to put a fair frost on a career, methinks - and it would permanently close any public-sector opportunites (journalists who don't make it big often end up handling media relations in some council, NHS trust or quango). Is there fear there ?

Or are they just not interested ? I hate to say it, but I wonder if that's it ? White liberals are happy enough - delighted even - to stand with their Muslim brothers against the hideous white racists, but is actually finding out about their lives and opinions just too uncomfortable ? As I've pointed out before, the average Ibrahim in the mosque and the average Guardianista are 180% apart on social issues. If Muslims were white, British Christians - or to put it another way, if white British Christians behaved as Muslims do, Guardianistas would not only be their deadly enemies - they would declare themselves as such and be proud of it. Easier for them just to turn in the opposite direction and scan the horizon for racists.

A year or so back I'd just returned from the States. By this time Americans were well aware that Iraq hadn't turned out as planned and that "mission accomplished" was one of the President's sayings that would go down in history for all the wrong reasons. Yet everywhere I went I saw "Support Our Troops" signs and bumper stickers, barns painted with the flag, injunctions to pray for the fighting men and women, yellow ribbons. I only saw one anti-war sign in 2,500 miles of driving - in Carmel, one of the richest and most liberal towns in California - didn't even see any in San Francisco. So you can imagine how surprised and pleased I was on my return to find one of the concrete pillars in Swindon town centre, by the guy with the mobile phone stand, covered in yellow ribbons and messages. How nice, I thought - they've remembered the troops in Iraq and Afghanistan. 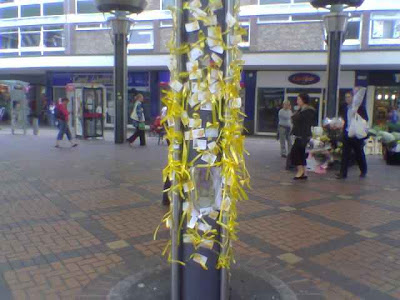 I went over to read some of them. They, and the ribbons, were for Madeleine McCann.

I walked the shopping centre, observing my countrymen and women, dressed by Adidas and Von Dutch, richly endowed with facial ironmongery. A walk through Swindon at lunchtime is enough to make anyone who loves England thoughtful. Maybe the chav population was particularly large that day, but there seemed only one person with any (non-threatening) presence - an aged Muslim in spotless white and with more dignity in his bearing than the rest of the street put together. I remember thinking 'who would you rather have for a neighbour - this guy or these people ?'.

This was perhaps a romantic view. While I can be pretty confident that Mr Ahmed wouldn't break into my property, threaten me for his amusement or hold noisy parties into the early hours, whether there would necessarily be that "duty of care" that the best neighbours have for each other is moot. It's possible that the question 'who is my neighbour ?' would be answered differently by a non-Christian - I'm not sure the kuffr qualify. Nonetheless, during the Bradford riots there were reports of young Muslim men standing guard outside the houses of their elderly white neighbours. There were others less well-inclined.

Still, I admire pious Muslims. I admire their faith, their cohesion (the way they'll circle the wagons when under attack - while Christian leaders sell out their flocks every day), their devotion. Read something like this touching piece and you'll see faith in action - religion bringing about real, personal change. Above all I admire their humility, held in common with most religious people - their certain knowledge that "we" are not all there is, that man is imperfect, is not perfectible, and that only through God can we even hope to consistently travel in that general direction. The native British had that humility once, when they were Christians.

In the post-Christian, post-British era, for most of us our life, our physical existence, is all we've got - so in time of trial we are alone, atomised, with our pain, our fear. Lose life and all is lost.

The paradox is that the acceptance by a culture that personal physical existence is not everything, manifested as a willingness to die - no, that's too strong - an acceptance that there are things worth dying for - has historically often been accompanied by secular power and success. In such a culture even defeat can become a potent weapon - if the victims can be portrayed as martyrs. To some extent this process was evened up by the fact that pretty much ALL cultures accepted that physical existence wasn't everything, and other factors also came into play.

We're entering a new phase of world history - one where some of the richest and most well-armed societies on the planet have decided, based on sixty years of peace and scientific development, that the old verities no longer hold and that the Gods of the Copybook Headings can be safely ignored. At the same time, they have invited into their societies people from the world they have left behind, to whom their revelation is anathema, and who retain the spiritual power that the rich societies appeared to have abandoned for good.

It'll certainly be interesting, from a historical perspective, to see how it all pans out. But the history of this period will be written by the winners.

UPDATE - that doesn't mean that the 'God-shaped hole' doesn't still exist in post-Christian Britain. The theme of an original Eden, lost through sinful Man's eating of the fruits of the tree of scientific knowledge and soon to meet judgment for that sin, is as strong as ever.
Posted by Laban at 8:06 am
Labels: culture, men without religion, white liberals
Newer Post Older Post Home