The Empty Shops of Bromsgrove - A Field Guide

Some twenty-five years back the council of Bromsgrove took the decision to close the old High Street to traffic and to pedestrianise it. It was a new, modern, forward-looking, progressive thing to do - and the council liked to think of themselves as new, modern progressive etc. At the same time they put a ring road through Crown Close, the old, quiet lane and associated green space at the back of the High Street, and sold off half the adjoining meadow (on which the Town Fair had been held since King John granted the charter in 1199) for car parking and a large supermarket.

When I retire I think I'll research who the councillors involved were, then start a new career vandalising their graves. I'll knock down the stones, put plain brick up and cover all with gobbets of chewing gum. Any grass will be paved.

Now a statue of A.E. Housman looks out upon gum-spattered pavements and a lot of empty frontage. I dread to think what the sensitive aesthete and classical scholar would make of it all. 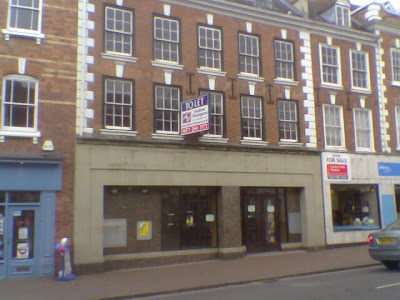 I think this one was Scotts the Jewellers (used to have a fine clock) before it became Halfords and then McDonalds. Jack Scott was a stalwart of Bromsgrove Cricket Club. A fine old building with hideous modern frontage. The charity shop to the right is on the market as well. 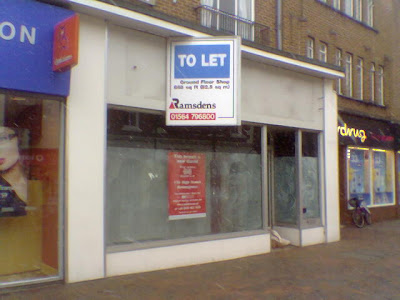 Not sure what this was - greengrocers ? 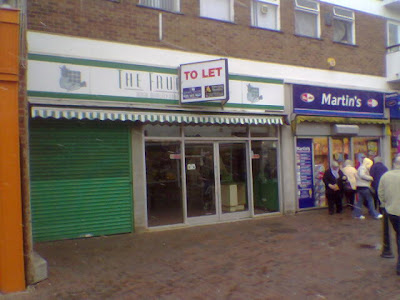 Note the modern maisonette style of building in what was a long Georgian/Victorian street. 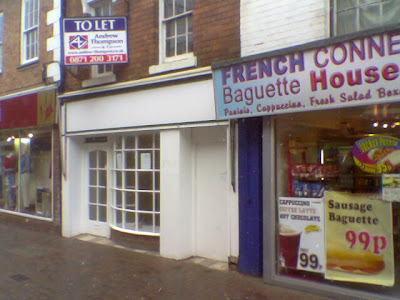 A nice old place, but the cheap'n'cheerful eaterie next door makes it unlikely that Beatrice von Tresckow will be snapping it up for her next store. The legendary Beau Brummell Coffee House, den of iniquity for a generation of High School students, was up the stairs somewhere round here. 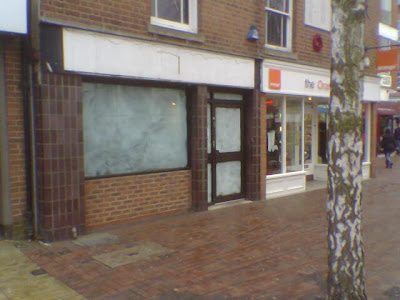 No redeeming features whatsoever. This section of High Street (the top right), from Lloyds Bank up to the Stratford Road (or Alcester Road for you real oldies) was extensively redeveloped in the early Seventies. Crowning vandalism was the destruction of two beautiful old Georgian coaching inns, the Roebuck and the Coach and Horses. The site is now an Argos. 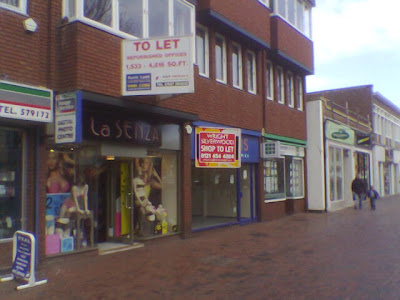 You've seen the top right - this is what they did to the top left. 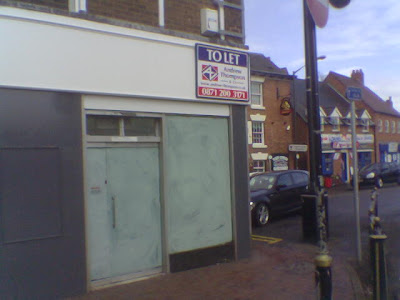 The very end of the top left. Just round the corner, the Queen's Head was a real old fashioned place, which had extended opening hours on cattle market days and served a decent pint of Ansells Mild. It isn't very old fashioned now, but at least they haven't knocked it down. 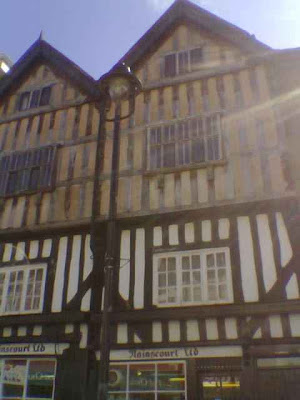 They haven't knocked down this beautiful building either - Rainscourts Delicatessen, a Bromsgrove institution for as long as I can remember. Great place for cheese and a pleasure to shop at.
Posted by Laban at 11:01 pm
Labels: Bromsgrove

I campaigned against the pedestrianisation of High Street in Rotherham saying that they would kill it.

It went ahead, and they did.

Boots moved, BHS closed, the small already strugglng Department Store closed, the Army Stores closed, even a jewellers that had been there for over 200 years was forced to close. It's mainly run-down charity shops now.

Rotherham had a bustling, compact town centre when I grew up there.

Naturally the Councillors try to claim that it is all the fault of Meadowhall and nothing to do with a long-standing campaign to drive car-drivers out of the centre by making it as difficult as possible for them via pedestrianisation, one-way streets, lack of parking and diversions away from the centre.

It appears Rotherham's Labour Council is not an especially stupid version, just a typical example of the breed.

interesting topic for a post. other bloggers should do the same for their local town , with photos - just to see visually how widespread this vandalism of town centres is.

I'm not sure it is just labour councils or even pedestrianisation. I know plenty of towns where decline has occurred and by no means have they all pedestrianised.

Large chains often get cheap rent because the owner knows they will attract customers for all. Small shops do not get this and cannot survive with high business rates. A vicious circle begins as charity shops replace proper shops. The attraction of the whole declines a little and then the next shop start to struggle.

The centre of Sheffield too is now comparatively dead.

Rotherham was dying long before Meadowhall opened. Looking wider, Bradford, Dewsbury, Ossett, Otley, Pudsey, Knottingley, Castleford, Harrogate are all struggling and yet Leeds, with a Lab (+Lib) dominance is growing apace with a heavily pedestrianised centre.

The sad thing is that none of that property is going to be snapped up any time soon, a) because the market is heading to recession; and b) because their is no half-decent business opportunity, except maybe to gut the place.

The small retailers are sadly paying the price now, of their short-sightedness during the past thirty years. Most of them failed to address the advent of the working housewife, and continued to close their doors at 5pm each day. I lived in Watford. I couldn't buy fresh produce on my way home from work untill the supermarkets started opening late. But once those supermarkets captured our custom, they kept it. They offer choice, free parking, long opening hours, on-site petrol stations, and the quality is generally very good.
And the clothing and shoe shops might have survived had they concentrated on good service. Instead they fall back on "if it's not on the display stand, we haven't got it" and "there's no call for it". You have to pay to park in the council car parks in order to be fobbed off and come away empty handed.

Local authorities and central government have certainly taken disastrous decisions. They cheerfully declare war on the cars that bring business into town. They close public libraries, and crown post-offices. And traders get very little in return for their business rates.But ultimately, success or failure was always down to the traders themselves.

In my hometown wannabe modernist socialist idiots destroyed the georgian/victorian high street in the name of progress...that and a chance to cut the ribbon...5 minutes of fame for third rate clowns.

A big factor is local councils reserving the right to screw huge business rates out of shops. So now not only do they have to deal with horrific urban redevelopment schemes, but they get bled dry to pay for it.

Add in the way the system aids those who can exploit economies of scale, and this is another reason why the Dog & Dog have been replaced by a Wetherspoons.

tdk, I'm not blaming pedestrianisation, far from it. I'm blaming the deliberate policy of trying to stop cars coming into the centre and attempts to insist that shoppers should be expected to haul all their shopping home on overcrowded, unreliable buses.

A better comparison would be between Rotherham and Barnsley, (also a Labour Council). Barnsley didn't drive out cars and their shopping centre is in a far better state than Rotherham's, (and also partially pedestrianised).

I live in Sheffield now, and compared to Rotherham, Sheffield is thriving, (especially if you stay away from run-down areas like the Castle Markets). However I don't drive into Sheffield, so the only shopping I do there is small scale and easy to carry back on the bus.

I certainly wouldn't take all 3 kids to get new shoes in Sheffield - I go to Chesterfield instead which has good parking (and access) right in the centre.

Can you see the pattern now?

I'm not sure that the pedestrianisation of the high street was at all detrimental. For me the reduction in free short term parking around the centre, the increase in parking charges, in both price and hours and the fact that there is very little chance you will find what you need for sale in the high street, unless that is, it’s a second hand clothes and free newspaper cds for sale in the charity shops or a new mobile phone. In fact even the mobile phone shops seem to have deserted the high street of late. Add to that all the congestion around the whole of Bromsgrove, due in most part to the expansion of the town with little or no changes to the basic infrastructure of the town and I'd much rather drive to somewhere like Kidderminster, where you can find a wide range of shops and ample free 2hr parking spaces.

Your inert and flatulant ramblings in the Advertiser are nearly as entertaining and mind rotting as daytime television.

I don't know where you have been recently but if you cast your eyes over the high street - there is nothing BUT mobile phone shops,.. and the road congestion is much the same as anywhere else, it has peak times, try avoiding them, easier than going to kidderminster where you will find similar congestion on a larger scale!

I see Motor World has now closed up shop too.

Happy to say at least one of these shops, the one incorrectly identified as McDonalds is now open as a Pizza Express.

Plus, since the Market Hall was closed down, you now can't see many of the empty shops due to the few market stall holders left who are now in the High Street.

And you can't see that the 'new' empty/closed Market Hall is closed due to all the market stall holders illegally parked vans all over the pavement and road in front of it. Somebody should put it on a postcard!

The good news is that about five new shops have opened in the high street. The sad thing is these are all chip shops and take away food places. Does a town of this size need eight chips shops on its high street.

Its a shame for the other shops who will struggle further as people have less and less reson to visit the high street.

The council have come up with the great idea of moving the amrket from the market hall they built, after knocking down the old one, and having the market stalls up the high street. This has the added advantage of hiding all the empty shops. It also makes it very difficulty to get up the high street or to find the doors to any of the shops still open.

The council now plans to knock down the market hall of our market town in order to increase car parking. Presumably for people wanting to drive into town to get a take away. They seem to have forgotern about the ugly multi story carpark that was built on public land and that now sits empty.

Last night, well four oclock in the afternoon, I saw someone come out of a pub on the high street, urinate in the street and then return to the pub to carry on drinking. 'tis a sorry sight indeed to see the towns high street come to this.

interesting blog. It would be great if you can provide more details about it. Thanks you


Property for Sale in Sheffield