Going north up the A38 from Bristol, just before you get to the Slimbridge Wildfowl Trust turn left, down a long lane through a village, carry on then a right over the Sharpness Canal to a wonderful old pub almost on the Severn, the Berkeley Arms at Purton. And on the riverbank the remains of dozens of abandoned ships ... 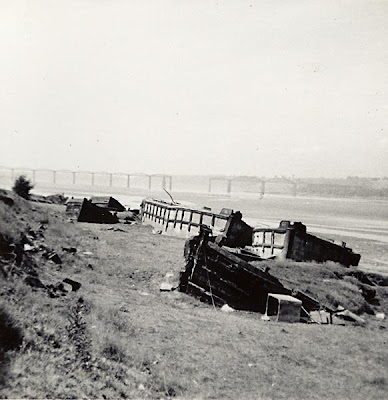 A dinosaurs’ graveyard of Britain’s maritime past emerges eerily from a mile and a half of bank along the River Severn.

Bleached blond ribs of once proud schooners, lighters, barges and Severn trows poke from the silt, still stained with pitch and the carmine of rusting iron nails. Above them loom abandoned concrete grain barges built during wartime when steel was in short supply.

The Purton hulks have become a magnet for naval historians, marine archaeologists and photographers enraptured by the weatherworn timbers and the tales they hold. But this unique repository of marine history is disappearing quickly, prompting the launch of a campaign to protect it.

The main problem is not the tidal waters of the Severn that take their toll at every high tide but human scavengers who, for more than 100 years, have been picking over the hulks for timber or valuable metals.

The vessels were abandoned along the Severn between Purton and Sharpness between 1909 and 1963.

In 1906 the bank had been damaged during storms and the Gloucester Sharpness ship canal, which runs parallel to the river, ran dry. The canal was rebuilt and an appeal was started for the owners of unwanted vessels to beach them to prevent the tides from eroding the bank again.

Over the next half-century, more than 80 vessels were run aground at high tide, creating what experts claim to be the world’s largest conglomeration of historic wooden vessels.

Paul Barnett, who first visited the site as a teenager in 1976, has watched the remains disappear as remorselessly as he has researched every vessel, its owners, crews and history. Albums of photographs record the transition from working boat, to stripped-out hulk, to little more than an outline in the grass. All that remains of the Katherine Ellen, seized by the Royal Navy after running guns to the IRA in 1921, is the rusty tube of her bilge pump. Others, such as the Harriett, a Kennet barge built in Pewsey in 1894, are intact, her name just visible on the stern.

You can see a few of the remains on Google Maps. The photo, taken in the 1960s and showing the damaged, and now-demolished, Severn Railway Bridge in the background is taken from Paul Barnett's excellent site. There are more photos at this site.

Paul does guided tours of the hulks - next ones on Sun 6 and 20 April at 2pm. If you're within driving distance and don't know the beautiful Severn Estuary, come and take a look before it all gets drowned.
Posted by Laban at 11:06 pm
Labels: history

Altogether a very weird part of the country.

You've been to Sharpness, then.