The Smugglers of Rhossili

A surging sea and a starless night,
And a vessel homeward bound in sight,
And a raging western gale that blew
Good luck to the Rhossili smuggling crew;
For always up on the farthest height
A pile was laid for the beacon light,
The false red light which seemed to say,
‘Twas safe to harbour in Rhossili bay,
Where the treacherous waters roll and flow
And tell no tale of the rocks below.

The wind is high and the tide is in,
And a merchant ship is a prize to win,
And a cargo washed on our shingly shore
Will bring us riches a six months more;
So who will go to the farthest height
To kindle the false red beacon light?
And a laugh went up from that motley group
Of women and men – a lawless troop
With clamorous tongues and gleaming eyes,
And greedy hands for the coming prize.

But one of them mutely stood and heard,
And never a thrill in her breast was stirred,
She had nothing to hope and nothing to win.
From the smugglers lawless life of sin;
They had picked her out of the sea one night
When a vessel was wrecked by the false red light
And for months and years they kept her there
To do their bidding and take no share;
So they bade her now with one acclaim;
“Go up and kindle the lying flame.”

She went at the word of that lawless band;
She plucked from the hearth a burning brand.
She left the cavern and crossed the creek,
And challenged the night wind rough and bleak.
She scaled the rocks and she climbed the hill,
To kindle the flame at her masters will,
To lure a ship to its certain doom
And a score of lives to a certain tomb!

She felt no pity, no shame, nor dread
Nor trembled to think of the life she led
And the ships went by and the ships came in.
And what did she know, poor child, of the sin?
She was one of the Rhossili smuggling crew,
And the thing they ordered she needs must do
A surging sea and a starless night,
But she carried the brand to the farthest height,
A headland of turf where the pile was laid;
When all of a sudden her hand was stayed
By a voice - a whisper – she knew not what,
That said in her heart, “Nay; do it not.”

Oh, can we tell you the doubt arose
The thing she would do was sin?
If an angel stood at her side, who knows
To whisper the thought within?
It was little she knew of love and truth
And nothing of Christian creeds;
And what had she ever heard of forsooth
To hinder from evil deeds?
The law was against them, she had been taught
And the law could make one swing,
But cunning people need not be caught
And that was the only thing

But once in her life, it chanced she strolled
To a chapel, and paused to hear,
And lingered a while, entranced, controlled,
In wonder and doubt and fear;
For the preacher discoursed of right and wrong
And the deeds which are base or true,
Till she shuddered to think she dare belong
To the Rhossili smuggling crew
And here on this wild and windy night,
With the brand to kindle the false red light;
She paused and trembled, for now she knew
‘Twas a deed of sin she had come to do

Oh, pity her there on the high hillside,
So little to help her, so little to guide,
So feeble a light to make things clear,
So little to have and so much to fear;
For if she returned to the Rhossili men,
And the ship rode safe on the sea, what then?
Her life was nought to that smuggling crew
If the thing they ordered she failed to do

“I dare not kindle the false red light!”
She cried aloud to the starless night;
“But what is this fear that bids me stand,
That makes me shudder and hold my hand
From a deed of death I have dared before?
Nay, where is the evil in one time more?
The vessel will never take heed, maybe,
It will stand on its course to the open sea,
And then if it should, is it matter of mine?
I only am here to deliver a sign.
It is not for me that they launch the boats
And steal in the dark when the wreckage floats;
It is not for me that they drag the net
For deeper treasures there may be yet;
It is not for me that the corpses lie
On the shingle and sand when the rocks are dry.
The gold and silver, the kegs of wine,
The bales of goods, they are theirs not mine!
If to kindle the false red light be a sin,
God knows I have nothing to keep or win.”

“No matter of mine? But how will it be
When the shattered vessel has sunk in the sea,
And over the water and up the creek
There cometh a desolate, drowning shriek?
No matter of mine? But will it be use
To sooth myself with a false excuse,
When the gaze of the dead men meet my own
And I dread lest the gaping lips should moan.
As I touch the lips and the clammy hair
Of the corpses stretched on the shore down there?
And, oh! The horror to hear in dreams
The widow’s wails and the mother’s screams!”

“The night is dark and I cannot see,
Has the vessel passed to the open sea?
Oh, sailors watching! You curse the night,
You cry aloud for a ray of light –
‘A ray of light and our ship would live’
Nay, better none than the light I give.
You’re best in the dark if only you knew:
And, sailors, I’ve given my life for you!
Tomorrow at dark I shall find my grave
Unwept, in the Rhossili smugglers cave.
For they warned me once, but they won’t again,
They keep their word, the Rhossili men.

Well, let them do it! ’Tis better so
Than the corpses stretched on the shore, I know:
‘Tis better I die, if so it be
Than twenty sink in the hungry sea.
And something rings in my head this night
Which says, though I cannot remember quite,
How he who to save his life has sought
Shall reckon his trouble in vain;
But he who has counted his life for nought
Shall find it for ever again.

“A strange new saying! I know not how
It cometh so clear to my memory now.
And I cannot tell what the meaning be,
Yet feel in my heart it was meant for me.
A message that saith to my soul ‘be strong,
The false red light is a deadly wrong’
And the vessel shall weather the storm as it may
But it shall not sink in Rhossili bay.
She gave one sweep of her arm on high,
And the brand flashed out in the midnight sky
Like a falling star or a fleeting spark,
Then dropped as a dead thing in the dark

The sun went up over Rhossili bay
And the wind blew soft
In the sails aloft
Of a ship that was riding safe and free!

The sun went down over Rhossili bay –
And a dying shriek
Was heard in the creek
As a life was thrown to the hungry sea. 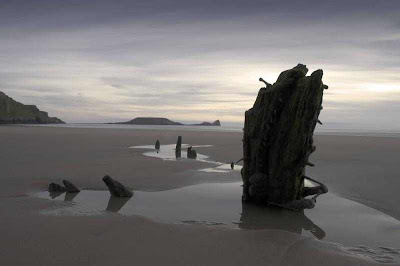 Photograph of the Helvetia by Geoffrey Kitt.


This poem, a family favourite, was printed in the South Wales Evening Post some time in the 1950s, and my uncle, who loved the wild end of Gower, copied it by hand, cyclostyled the sheets and had them professionally bound. No idea of its provenance, but it's got Victorian morality tale stamped all over it. It came back to me when I climbed Worms Head last week.

I keep hearing that rap lyrics do not influence bad behaviour, but simply reflect something that's there already. I also hear that behaviour isn't really getting worse, because some Greek guy complained about the young a few thousand years back, so that proves it.

If writing reflects society, might there not be a real difference between the world of "Come Into The Garden Maud" and Nate Dogg's "I need a bitch", or between Oliver Twist, where "with all the cruelties and injustices visited upon the young orphan, all the horrors of the workhouse and Victorian poverty, neither the author, nor any authority figure in the book, suggests that stealing is anything other than a great evil which should be punished severely" and a world where a privileged scion of the upper classes argues that those who run stores are greater criminals than those who steal from them ?
Posted by Laban at 11:49 pm
Labels: before the Fall, the way we were, tough on crime, wales, white liberals

Top post Laban - I lurk here a lot. Get a column, man.

This is one of the most powerful blog posts I have ever seen on the web.

Thank you, Laban. Rhossili will always be special to me. All the more so thanks to that fantastic poem.

I hadn't heard of that poem, so thanks for bringing that to my attention.

I hope you had as lovely a holiday in Gower as we did!

I heard an interview on the radio the other day. A journalist was asking a young man (17) whether he would turn his music down if he was told it was bothering others on the bus. He said nah he wouldn't. He works 6-7 days a week, pays his taxes so he can do as he likes. The fact that others around might not want to listen to the tinny end of his head phones interested him not in the slightest. He would do as he liked, all the time, and that was the end of it.

Society cannot cope with such types. It will just fall apart. If its members have no social conscience, it will cease to exist and anarchy will set in.

My ancestors were the smugglers of Rhossili!!