I was cut up yesterday by a Polish trucker, in the left-hand lane as we approached a roundabout, who then turned right without signalling - bad news for anyone in the right hand lane and going straight on i.e. me.

I've got sympathy for the stranger in a land where the rules and signs are strange. But when he's toting a lethal 44 tons of artic you have to wonder if they shouldn't have to take a test here. I imagine the EU is the repository of that particular bit of lost sovereignty.

This Belgian chap seems a bit of a Frank Spencer.

A Belgian man has been charged with dangerous driving over an incident in which a lorry damaged cars while doing a U-turn in a Cornwall cul-de-sac.

The foreign-registered lorry was carrying 23 tonnes of coal when it became trapped while manoeuvring in Whiterock Road in Wadebridge.

A roundabout and six parked cars were damaged, with one car left trapped under the lorry's trailer. 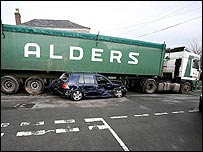 About two years ago I was a passenger in a car when a Dutch lorry driver drifed too far to the right and clipped the car I was in sending it spinning off the road and into one lamp post and then another lamp post. No one was hurt surpringly but it did convince me that HGV drivers from countries that drive on the right should be tested to ensure that they are comfortable with driving on the left.